Share All sharing options for: BREAKING: Major Bring Chicken to the Bucket development

Rivals.com has just updated the profile page for one Danrad "Chicken" Knowles, and you might notice a certain, perhaps even familiar, program now among the lucky listed as being in the running for his services. 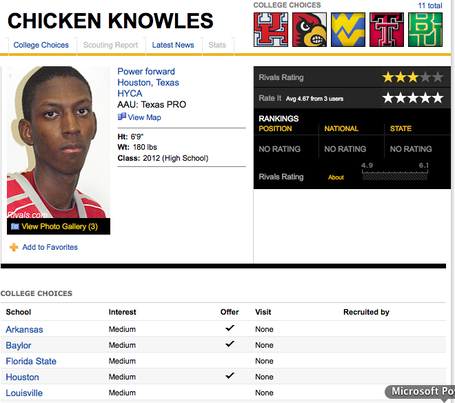 This is major. Yes it is. Do not shake your head at me.

The other six schools listed under "college choices" are Missouri, Oklahoma, Texas, South Carolina, Texas Tech, and West Virginia. The Gamecocks, Red Raiders, and Mountaineers have all offered a scholarship.

As much as the Fuller departure has hurt, it would be about 50 times worse if Chicken ended up in Morgantown. In fact I can't even think about it. It's too close to bed time.

Offer this young man a scholarship. Not tomorrow, not after he balls out at another camp, not after Preston! makes an impassioned plea on live television; right now. Do it.