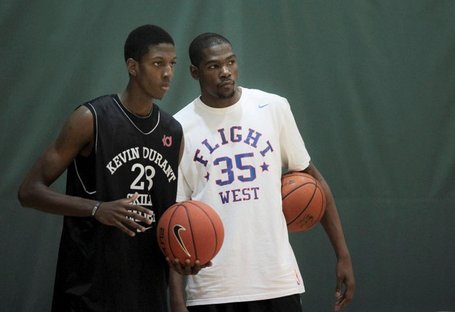 There are people who are now saying that Chicken Knowles is going to end up being better than Kevin Durant. Those people are all me, but whatev, I count.

Victor Anderson has been spending a solid chunk of his summer working with horses, partly because he one day hopes to own his own farm.

"It's been a thing I've grown up thinking," Anderson recalled recently in a phone conversation. "Just being out in the open and having your own land, it is so peaceful. You can relax. I love being around horses. They are such beautiful animals. Being able to watch them at my job has been a great experience."

Anderson promised coach Charlie Strong he would be able to get all his workouts in during spring practice and this summer, in between his work on the farm. Strong gave his blessing. But that doesn't mean Anderson has avoided being teased. If he shows up for workouts after being on the farm, there is a certain stench that is stuck to his clothes.

"They just joke around saying, ‘Oh, that's what you think of us around here?'" Anderson said. 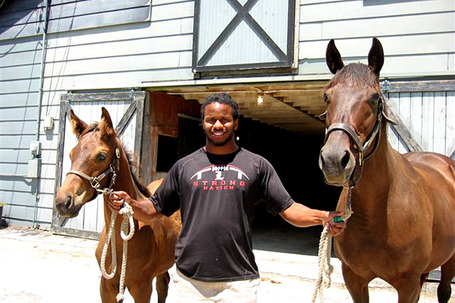 Vic actually spent last summer working for a friend of mine (Hey Brooke. You're really, really short. Like incredibly short. I'm saying this because I know you won't read it.), and she had nothing but good things to say about the former St. X star. He's certainly a character, and he'll be missed after this season.

It's also worth noting that Charlie Strong linked to this story on Twitter, calling it a "great story about a great young man." He's really attempting to play up Anderson the same way he did Bilal Powell around this time a year ago. It's very similar to the way we've seen Rick Pitino get behind his seniors over the past several years.

The Sporting News ranks all 120 teams in college football, and drops Louisville in at #44.

QB Will Stein: "We really don’t get caught up in rankings too much, but it’s good to be in the top 50. We know we have a lot of work to do to reach our goals. We have a lot of momentum after winning our bowl game last season. However, we know these rankings won’t mean much if we don’t take care of business this summer and the start of fall practice."

ESPN's Andrea Adelson wonders what the addition of Tyler Gabbert does to the quarterback situation at Louisville.

Adelson also ranks the best running back units in the Big East, and slots the Cardinals at No. 4.

4. Louisville. Another big-time rusher in Bilal Powell is gone and so are his 1,405 yards. Victor Anderson had a nice spring, leaving many to hope he can return to the form that he showed as a freshman. He and Jeremy Wright could be a fearsome 1-2 combo. The Cardinals are committed to running the ball, so that is a plus, and a big reason why the Cardinals are ranked No. 4. The big question here is how an inexperienced offensive line is going to affect the run game.

According to Adam Zagoria, Gabe York, a class of 2012 shooting guard who has been considering Louisville, will make his college decision very soon.

Kentucky's John Wall has been arrested on charges of making meth.

And finally, unbeknownst to just about everybody, The Great Steamboat Race - which was canceled on Derby week because of the high water level - took place yesterday with the University of Louisville boat defeating the University of Kentucky boat.