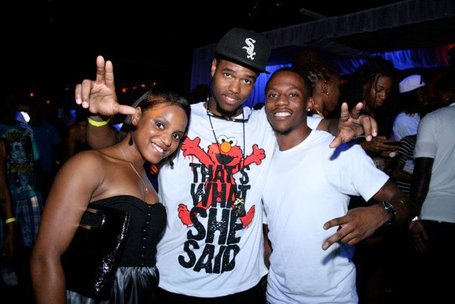 Try and judge me when you see me wearing that shirt everywhere this weekend.

The Louisville preview from College Football News is out, and in it the publication ranks the Cardinals' ten best players. Here's what they came up with:

Teddy Bridgewater is going to be special.

Andrea Adelson ranks the best receiving units in the Big East and slots Louisville at No. 7.

7. Louisville. The Cardinals lose their top two receivers, and have got to figure out a way to make big plays and stretch the field with a young group. Josh Bellamy appears to be the go-to man headed into 2011, and much is going to be expected of Andrell Smith and Michaelee Harris. Both are coming off injuries and were unable to practice in the spring. True freshmen are most likely going to be relied upon, giving Eli Rogers and DeVante Parker and opportunity to play.

While I disagree, it's hard to fault Adelson's position since so many of the guys Mike Samford is going to utilize are largely (or completely) unproven.

A story on punter/Internet superstar Joshua Appleby's commitment from his hometown paper.

"It had a lot to do with the friendly coaching," said the East Limestone kicker. "I spent a lot of time talking with Kenny Carter, the special teams and running back coach and heard a lot of great things about (head coach) Charlie Strong. The facilities were great; everything was top of the line. I just really felt at home."

Appleby, a Class 5A honorable mention All-State selection, chose Louisville over an offer from in-state rival Kentucky. Alabama, Florida State, Miami and Texas also showed interest. Last season, he punted 26 times for a 35-yard average with a long of 52 yards. He was also 6 for 9 on field goal attempts with a long of 43, and had 30 touchbacks on kickoffs.

"I never knew if it all would come together when I began playing football four years ago," Appleby said. "It’s been humbling but cool at the same time. It’s something that a lot of kids always dream of doing but not a lot of them get to do it."

TCU, which joins the Big East in 2012, is dominating the rest of the league in recruiting right now.

You have until Thursday afternoon at 2 to cast your vote.

This is a fantastic read from SI's Joe Posnanski on Lorenzo Charles and the moment that defined his life.

ESPN's Charlie Creme has unveiled his early women's top 25 for next season, and puts Louisville at No. 11.

11. Louisville: The NCAA tournament, specifically the second-round upset of No. 2 seed Xavier in Cincinnati, looks like it was the unofficial commencement of the Shoni Schimmel era at Louisville. The most decorated recruit for Jeff Walz is an emerging star at the point with a flare that makes her game as fun as it is prolific. Schimmel has plenty of help with the return of leading scorer Monique Reid, Tia Gibbs and a group of classmates who should be much bigger contributors in 2011-12.

Edgar Sosa is one of several players who will participate in a minicamp held today by the Phoenix Suns.

And finally, here's an update from Jody Demiling on T.J. Warren, who says Louisville is in the mix even though Rick Piitno hasn't officially offered him a scholarship yet.