Chris Hawkins is a former North Carolina football player whose providing of improper benefits to current Tar Heel players is one of the biggest reasons the program might be staring probation directly in the face.

Hawkins was also expected to be on trial today for a felony charge of cocaine trafficking and misdemeanor marijuana possession dating back to April of 2009. That trial was delayed, however, and that news was covered by Ben Kercheval at NBC Sports.

Here's a snapshot of the post Kercheval made on the story. 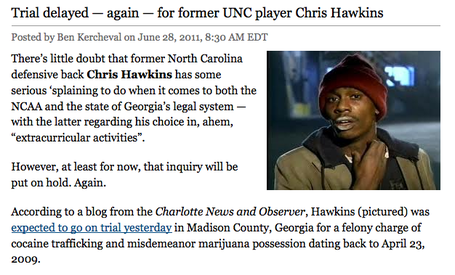 The man pictured is not Hawkins, but rather Tyrone Biggums, a crack-addicted character from Chappelle's Show.

Hilarious? Yes. Appropriate for a website affiliated with NBC? Going to have to side with no.

UPDATE: The picture has been removed and replaced by a UNC helmet image.