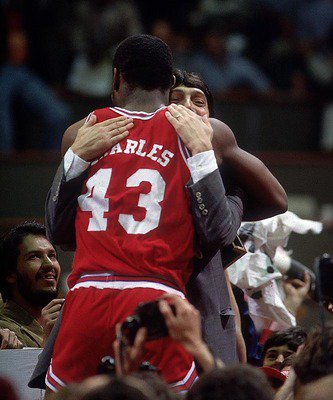 Eric Crawford had a nice column yesterday on the slowly emerging war of slogans between Rick Pitino and John Calipari. I think it's pretty fascinating to sit back and look at how the whole thing has evolved.

Here's Pitino, once the flashiest and most innovative coach in college basketball who sent Wildcat after Wildcat off to the NBA, and his battle cry is now "Louisville First," a nod to doing things the old-fashioned way and playing for the name on the front of the jersey. On the other end of the spectrum is Calipari, whose slogan, "The Kentucky Effect," revolves completely around getting players into the league and has no direct relation to the actual sport of college basketball. Yet it's Calipari who is dominating the recruiting world like Wooden once dominated the actual sport, and the Wildcats who are coming off of a Final Four appearance.

Both coaches are representing extreme positions here, and a lot of the reason for that is the distance each wants to put between one another in order to appease their respective fan bases. The truth, of course, is that Pitino and Calipari each want at least a little bit of what the other is boasting. You can't win a national title without next-level talent, but exceptional individual play alone also isn't going to bring home the hardware.

The exciting thing, as far as the rivalry is concerned, is that each is getting a little bit of the other's schtick (gross) this season. For the first time in a long time, Pitino is bringing in a top five recruiting class that includes multiple McDonald's All-Americans. On the other side, Calipari is getting second years from both Terrence Jones (probably the most gifted of last year's UK freshmen) and Doron Lamb, the former citing his desire to bring a title to Lexington as his main motivation for returning.

The next nine months or so ought to be this rivarly's most exciting, or at least noteworthy, in quite some time.

Charlie Strong landed a punter who is bigger than Sebastian Janikowski, starts at tight end for his high school team, and has the coolest recruiting website of all-time. If Strong was going to sign a punter, this was the only way he was going to go.

Gerod Holliman has stated on Facebook that he is leaving for Louisville this morning. If true, this is great news because there's a very real chance that this team will need him to contribute immediately.

A good read from Chip Cosby on Clifford Snow's move from Kentucky to Louisville.

"It had nothing to do with Joker," he said. "I respect everything Joker is doing with the Kentucky program, but you want to be able to do your job to the best of your ability. I’ve worked with Charlie a little longer, but both of them are great guys. I got to spend a lot of time with Charlie while he was defensive coordinator (at South Carolina). To watch how he handled the defense and the players and coaches, you knew that he’d be successful and his time would eventually come. And we had talked in the past and it was one of those deals where we said, "If you ever get a head coaching job…. And the opportunity to work with him again was too good to pass up."

Snow was appreciative of how Phillips handled his decision.

"First of all, Joker was kind enough to allow me to even interview for the job," Snow said. "And he said, ‘I don’t want you to leave,’ but he was fabulous. He understood my reasoning. It was something my wife and I felt was in the best interest for me career-wise. I felt really bad because Joker gave me a chance, and it was a great one-and-a-half years. It was just something I believed I needed to do."

In an ESPN chat yesterday afternoon, Joe Lunardi stated his belief that Louisville is a serious threat to crash the Final Four and that the Cardinals are one of three favorites - along with Syracuse and Pitt - to win the Big East.

Louisville at Cincinnati in Paul Brown Stadium is one of the ten games that will determine the Big East in 2011.

According to men's health, Lexington is the laziest city in the United States.

Oh yeah?! Well that's just cause we ain't gotta run from all them gangsters, like y'all do in LOSERville.

The Providence Journal has a early Big East basketball primer that I wouldn't recommend to someone I respect, but feel free to read it if you have nothing else to do.

Michigan point guard Ray Lee (class of 2012) was supposed to take an unofficial visit to Louisville on Sunday, but had to cancel because his "driver had to go to a wedding." Ah, recruiting.

I think the best part about the Bahamas trip is the fact that the team gets ten days of practice beforehand. Getting a head start on team chemistry is obviously important for a squad with 18 players, but this is also the highest number of newcomers that any of these guys have dealt with (at least at Louisville). Those ten days of practice and succeeding exhibitions really are going to be an invaluable experience.

And finally, our thoughts and prayers go out to the family and friends of Lorenzo Charles, who died in a bus wreck in North Carolina yesterday. It was his moment that truly made March mad.