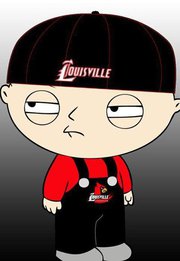 There's only one way to start the week, and that's by thanking CardsFan922 for taking such good care of you all over the weekend. Although I did hear that he let you rent and watch Scream. Can't say I'm thrilled about that.

The biggest piece of news from over the weekend was the "indefinite suspension" of Darius Ashley by Charlie Strong.

There was a lot of debate in the preceding days about what the proper action was in this situation, and I think the overwhelming majority of Cardinal fans agree with Strong here. Darius Ashley will almost certainly not play football for the University of Louisville this year, but he's also not being thrown out on his ass to deal with a very serious problem all by himself.

As for Strong, you have to respect the fact that he didn't beat around the bush and spoke directly about Ashley's "alcoholism," and also that he said the following: "As a coach we have to understand this. When a player fails, we all fail."

Strong proved last season that he can get the job done on the field, but he's been proving since he got here that he's capable of making the right moves in the oft-stressful and controversial extracurricular world of major college football.

Here's a fresh set of highlights of the newest Cardinal, Kevin Ware:

Jarvis Giles, the former South Carolina running back who transferred to Louisville but left the team last month, is now reportedly trying to transfer to South Florida. However, Big East rules state that a football player who transfers from one member institution to another is ineligible to participate on the team at the second school. If Giles is looking to continue his playing career, he'll have to look elsewhere.

York said he plans on visiting Louisville and his high school team will play next winter in the King of the Bluegrass Holiday Classic at Fairdale.

"Louisville plays a very up-tempo, fast pace game and that’s what I am looking for," York said. "Rick Pitino came to my high school and that was a great experience.

"It was just the fact that he’s such a big name guy and he came all the way out to my high school to see me and was a big honor. There were probably 100 students in the gym waiting in the gym to see him. He hasn’t lied to me at all. He’s told me up front that he thinks the guards are leaving and that I would have a good chance to play."

Very interesting to hear that Pitino has used "the guards are leaving" as part of his recruiting pitch. It's a loaded statement, and one would have to to conclude that Peyton Siva heading to the NBA is encompassed.

In Chicken Knowles news, the man, the myth, the legend apparently had the opportunity to ball with Kevin Durant over the weekend. He also got a little bit of love from CBS.

Andrea Adleson ranks the offensive line units in the Big East, and Louisville's inexperienced group checks in at No. 7.

7. Louisville. The Cardinals return just one starter in center Mario Benavides, who has been hampered with a knee injury. Ryan Kessling and Alex Kupper have playing experience, but most everybody else is pretty unproven, and that makes for one of the biggest question areas on the team headed into the fall.

And finally, Matt Norlander says that Terrence Jennings is one of the "misfit toys" of the 2011 NBA Draft.