Share All sharing options for: Rick Pitino's class of 2011 is top five

Scout.com has unveiled its final team rankings for the recruiting class of 2011, and Louisville's group of Blackshear, Behanan, Price, Nunez and Ware checks in at No. 5. 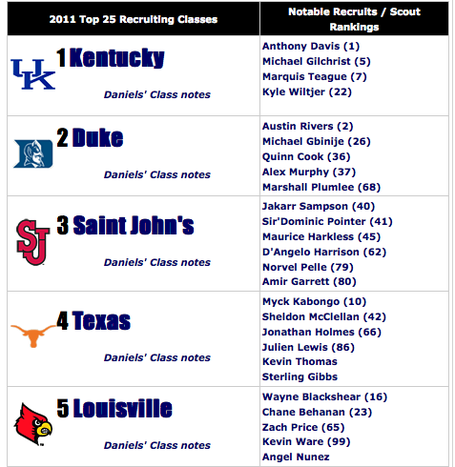 Given the above, it's hard to believe that the climate surrounding Cardinal recruiting has been so negative in recent months. Now part of that is because of the guys we lost in the 2012 class after Fuller's departure, but I think it has more to do with Kentucky's success than anything else.

As hard as it may be to do, Louisville fans need to forget about the ridiculous amount of success John Calipari is having with 17-year-old kids. This right here is a top five recruiting class. That doesn't happen very often. Be happy about that.

You need great players to win a national championship, I don't think there's any doubt about that, but the last few years have shown that you don't necessarily need the best players. Pitino has the talent to make a run at the big prize for the next couple of seasons, and as fans that's all we can really hope for when it comes to recruiting.