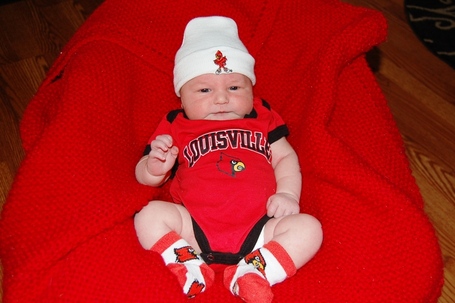 This is Liam. Liam enjoys the Louisville Cardinals. He's less fond of the Kentucky Wildcats. His life highlights include being in the womb for the Morehead State game, and beating up Pat Driscoll's kid.

We begin the only way we know how: with Chicken Knowles.

OK, I'm going to tell you right off the bat not to freak out when you read this. If you've already had your coffee or are around human beings who don't read Card Chronicle, I suggest you skip ahead or avoid this tidbit completely. It's not worth losing your job over. OK, it's completely worth losing your job over, but I'm trying to protect you. I was born with a paternal instinct 3 1/2 times larger than that of an average person.

Are you cool? All right then, read ahead.

The topic of the Chicken was brought up on a web site dedicated to Texas High School basketball, and one of the site's proprietors posted a message which included the following:

Rumors tonight from his AAU coach says Louisville may lead for Knowles.

Is it possible that this person actually spoke with Knowles' AAU coach and that coach did, in fact, say - with honesty and accuracy - that Louisville is the leading candidate to land class of 2012 power forward Chicken Knowles? Yes. Is it far more likely that this person merely saw Knowles re-tweeting several Cardinal fans on Twitter or ran a simple Google search and noticed that 90% of the stories mentioning him are from a U of L website? Yes. Does seeing someone (ANYONE) "reporting" that Louisville is actually recruiting - and leading in the recruitment of - Chicken Knowles get you sexually aroused? Of course it does.

One day you will all be able to say: "I was there when it started. From conception to completion, I witnessed history."

In all seriousness, if this were to actually happen we would all absolutely have to gather somewhere and celebrate for a solid 24 hours. I'm 100% not joking. I don't care if the news broke at 1:15 a.m. on a Tuesday, an establishment somewhere in the city would immediately be rented out (price might be an issue) and heavy drinking would take place soon thereafter.

BallisLife.com has some highlights of Peyton Siva at the Chris Paul Elite Camp a couple of weekends ago.

The reports of PeyPey putting on a solid amount of muscle certainly appear to be true. That's a huge step for his progression, as one of his biggest weaknesses over the past couple of seasons has been a propensity to lose his dribble after the slightest bit of contact. Playing in a league like the Big East where you're constantly dealing with ball pressure and playing in a pick-and-roll offense like Louisville's where you're going to have to split defenders fairly regularly, putting on some poundage was an absolute must for Siva.

Tuesday was a rough one for the Courier-Journal, which was forced to let 50 employees go as part of the Gannett layoffs that left 700 employees from 81 different newspapers without a job. It's no secret that the paper is struggling, and charging customers more while reducing its workforce (all but ensuring the continued diminishment of the product in question) certainly isn't going to remedy anything. Coming from a family that has had multiple members employed by the paper over a significant period of time, it's difficult to watch.

Here's a still-relevant take on the situation from Eric Crawford.

Tim Blair of the Marquette blog Cracked Sidewalks is telling stories of his travels from the past basketball season, and has a nice take on his experience from "The Comeback at the Yum...Back."

Arriving early at the KFC Yum! Center, I did a walk-about of the interior. The design is very fan-friendly, with varied restaurants, bars, menu choices contained inside—with walk-throughs to your seats. This new riverfront arena is the big sister to the U of L practice facility of the same name located on campus. The Louisville Basketball Hall of Honor is contained in the arena. Nice touches like projected game statistics on overhangs and handing out sponsored official statistics at half time and after the game make this a great fan experience, something the Bradley Center could learn from. The Louisville fans are very knowledgeable and loyal, and treated us with warmth, blowing away the stereotype.

And, the first 85% of the game was a great Marquette fan experience. The Golden Eagles built an 18 point lead, and the Red Loyals were streaming out, mumbling Pitino "unsweet nothings" under their breaths. The remaining Redbird fans sat there in stunned silence. Our Marquette fan pod sat respectfully tame, cheering at appropriate road levels. Then, a slow-motion disaster unfolded right before our wounded eyes, resulting in yet another last second loss. The breakfast buffet concerns about inexperience came home to roost. The Vanquishers became the Vanquished in the blink of an eye.

We now sat there in stunned silence. The Louisville fans were incredibly empathetic, even apologizing, certain not to rub it in. It was perhaps the oddest fan experience one could imagine. The season was now in an emotional shambles for the MU fanbase. I circled back to Champions for a medicinal ale quickie—and ESPN’s Bill Rafferty was holding court at the back tables, in true Irish fashion.

Yeah, that was a good day.

Voting closes for the LCPT Final Four tilt between John Calipari and Tim Fuller at 2 p.m. this afternoon. It's going to take some serious Fuller recruiting magic for his run not to end here.

Famed singer/dancer/female and window smasher Chris Brown is donning a Louisville hat (or "snap back," as the kids say) in the new video for the New Boyz song "Better with the Lights Off." Belated and misguided show of support for Tony Woods? Perhaps.

National basketball powerhouse New York Rice High School - the former home of Edgar Sosa - will be shutting its doors for good on June 30.