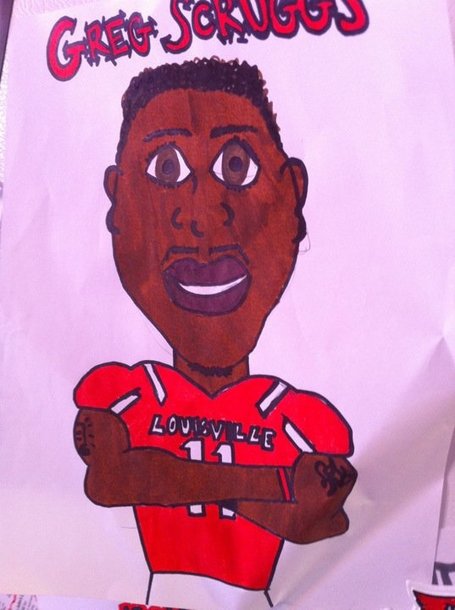 The big news of Monday was obviously Darius Ashley's second DUI arrest in seven months. I'm going to talk (type) more about this in a couple of hours, but for now here's Eric Crawford saying the program needs to send a message with its punishment of Ashley.

Whether U of L coach Charlie Strong cuts him loose or gets him help or both, this kind of thing would indicate that the kid needs to be focused on something other than football for a significant time.

This is a program that has had some tragic alcohol-related incidents in recent years.

Trent Guy is at a club in the wee hours and winds up getting shot.

Daniel Covington (after his playing days) gets into an altercation in an intersection and is shot and killed. The shooter, also a U of L athlete, somehow went unprosecuted.

U of L players have these examples of how dangerous the consequences can be if you put yourself in the wrong place at the wrong time. DUI takes that a step further, of course.

This incident is more than an embarrassing episode for the Fulmer Cup folks to exploit. I know that college students drink. It’s a fact of life. And some have a real problem. But the message from this program right now needs to be clear.

The other big news on Monday was the signing of speedy Ohio cornerback Kevin Houchins, who became the seventh member of Charlie Strong's recruiting class of 2012.

When word leaked that football news would be breaking yesterday afternoon, I must admit that I was a little disappointed to hear it didn't have anything to do with four-star linebacker Nick Dawson. Dawson has been a Clemson lean for the bulk of his recruitment, but Clint Hurtt has made a heavy push on the rising senior since mid-May and Dawson reportedly enjoyed himself at Louisville's camp last weekend. If he does end up pledging his allegiance to the Cards at some point, it will be a big deal.

Rashaan Myers recently sat down with Peyton Siva to talk a little bit about his busy summer. Siva says his main focus over the past couple of months has been improving his jump shot, something he worked on extensively with the Dallas Mavericks' Jason Terry.

Big East Coast Bias selected Louisville in the third round of the SB Nation conference re-draft project, and took a little bit of heat for it. Here they are defending the selection:

The $16.8 million in profit that Louisville basketball turned in 2009-10 ranked them 21st out of the 50 most profitable college programs. Football brought in another $3.3 million in profit over the same period. Let's reiterate, the KFC money hasn't been stacked up yet.

Charlie Strong doesn't play golf, but that didn't stop him from getting involved with the Down Syndrome of Louisville Pro Celebrity Golf Tournament

John Wall and Peyton Siva: BFF's (I seriously debated for about 30 seconds about the apostrophe there).

The Big East, which turned down a one billion dollar TV contract offered by ESPN last month, makes a lot more money from basketball than any other league.

Daily General Admission only $15 per person!

Here's the 2011 distribution of NCAA basketball revenue by conference:

The NBA D-League will be hosting open tryouts this Saturday and Sunday at Hoops. Here's the info if you're looking to attend:

Daily General Admission only $15 per person!

Tickets also available to purchase at the door on Saturday and Sunday.
More info: (502)-290-6444 or info@wherethegameis.com

The schedule for spectators on June 25 and June 26 is below:

Though Rick Pitino stated previously that he is only looking to sign "one or two" players from the class of 2012, his new staff has done a great of getting tight with several of the class' top prospects.

And finally, a very happy Summer solstice to all of you.

Pants off at 1:16 p.m. When you see your boss doing it too then you can instantly spark up a Chicken Knowles conversation. You're welcome for your promotion. I'm going to need some of that bonus money.