On curses born and curses broken

Share All sharing options for: On curses born and curses broken

"What we call the beginning is often the end. And to make an end is to make a beginning. The end is where we start from." --T.S. Eliot

I was 22-years-old and only a handful of weeks removed from completing my final undergraduate...final. Days were blurred, a normal sleep schedule had long been abandoned, and the future was a giant mystery. There was only one absolute certainty in my life at that time: Louisville football was really good.

Six months earlier the Cardinals had claimed their first BCS game victory by topping Wake Forest in the Orange Bowl, and I had been there. With 17 returning starters, a top ten preseason ranking, and a seemingly manageable slate of 12 opponents, talk of another out-of-town New Years was both rampant and justified. My biggest concern was what I'd be wearing during the journey ahead.

The 23 people who regularly read Card Chronicle at the time were all well versed in my affection for kicker Art Carmody, and one had tipped me off that there was a beautiful black No. 18 jersey for sale at the Cardboard Heroes store in the St. Matthew's Mall. Summer goal No. 1 was conceived.

I set our for the mall early one morning soon after this dream was conceived. I had not slept. Not a regular mall patron by any stretch of the imagination, I was unaware that the stores did not open until 10 a.m. I arrived around 9:40, and was creeped out by the mall walkers for 20 minutes. Finally the gates to Cardboard Heroes rose and I strode into the store like a conquering hero.

The intrigue in the eyes of the store's female employee wasn't difficult to spot. Who is this guy? Why does he look so focused? I like his shirt. What could possibly be so important that he felt the need to be here right at opening?

Minutes later I was in the parking lot, sending a three-word text message to an exclusive group of friends.

I had the jersey, I had a summer of freedom, and I had what would surely be the greatest football season ahead sitting just weeks away. In that moment, the world was Mike Rutherford's.

This is the squalid, or moving, part of the story, and the scene changes. The people change, too.

The jersey was there for Steve Johnson getting loose. It saw Larry Taylor clearly signal for a fair catch. It watched Syracuse pull the biggest upset in the history of college football in terms of point spread. It was a first-hand witness to Pat White's absolute dominance. It could do nothing to stop the personal foul penalties, the draw plays on third and long, the endless jet sweeps, the poorly-attended home games, and, of course, the losses. It saw Tyler Wolfe and Zack Stoudt bear its likeness, and subsequently leave the program. And, mimicking Peter's denials of Jesus, it was thrown three times in disgust (UConn 2007, Kentucky 2008, South Florida 2010).

The jersey was cursed. Any Chronicloid could, and will, tell you that.

Despite the fact that even the jersey appeared to be no match for the magic of Charlie Strong (it was a solid 4-2 in 2010, including a Beef Bowl victory), I knew heading into this season that some fresh go-to-garb was needed. The black was cool for night games and, naturally, black-outs, but I still feel like red is almost a necessary choice for really important home games like Kentucky. Still, I wasn't entirely sure what direction I wanted to head.

Sometimes fate saves you the trouble of searching for the answers to important problems.

Yesterday I received a package with the name of a familiar friend from Shreveport on the return address. I opened the box. I was reborn. 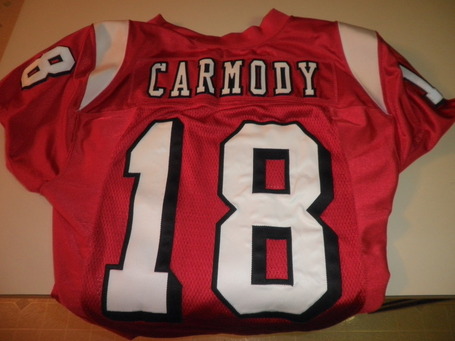 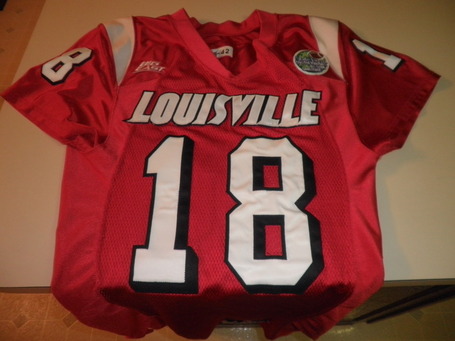 That just happened. You know what else did? OFFICIAL ART CARMODY STATIONARY. 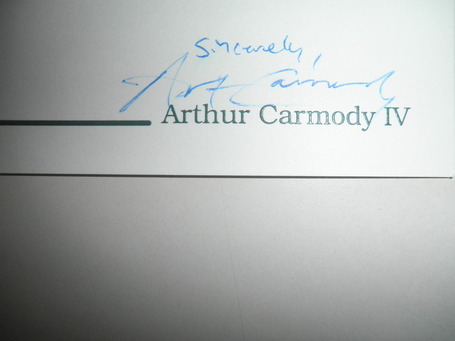 The words written above those are for my eyes only. Hint: they're glorious. The patch on the sleeve of the jersey is from the State Farm College Football All-Star Skills Challenge. NBD. The man couldn't be cooler.

The upgrade is symbolic. The black jersey was flashy and relatively expensive, and it represented a time where we all thought winning would be easy simply because it was what we'd grown accustomed to. But the fabric was light, the Orange Bowl patch was obviously fake, and honestly it was a little too big for me. Had to tuck it in. This new jersey is the real deal, and is the product of actual work.

When you see the jersey above inside or around Papa John's Cardinal Stadium in the fall (and you will...hard), I want you to think, "hey, that's Mike Rutherford, I'm going to go give him $75 in cash and a beer." But even more than that, I want you to be reminded. Reminded that this is a new era. Reminded that we're in good hands. Reminded that the necessary work is being put in to get this program back where we all want it to be.