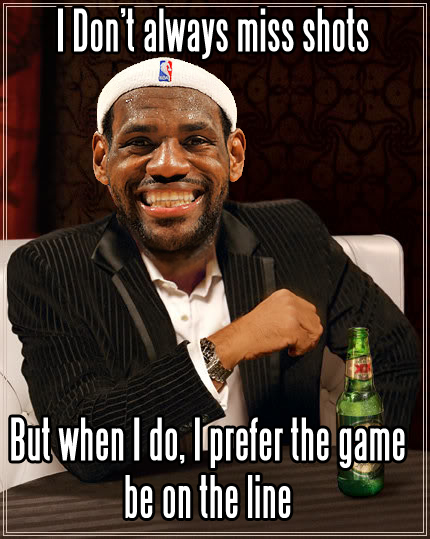 So the NCAA is upset with Kentucky for celebrating John Calipari's 500th coaching victory last season when he technically is still short of the mark thanks to the 42 vacated wins he oversaw at Memphis and UMass. The institution's mature and adult way to go about dealing with the situation: demanding a public apology.

We could talk at length about how the request is incredibly petty or how the NCAA could be spending its time doing 100,000 more useful things, but instead I'll leave it at this: that's f---ing hilarious. My dream scenario involves a half-hearted public apology, the NCAA refusing said apology and instead requesting a bigger apology, only this time in video form. And then I get to direct the video. And I get paid a lot of money. And Barnhart gives me my check on his knees. And that presentation is filmed. And it's the last scene of the apology video.

The Indiana All-Stars completed their 6th sweep in seven years of rival Kentucky by pounding the Bluegrass seniors by 12 on Saturday. Kentucky was led in scoring by former Louisville commit Ryan Taylor, who dropped 24. Though Taylor has repeatedly stated he will end up a Cardinal at some point and was actually introduced during Friday's game at Bellarmine as a "Louisville commit," Rick Bozich reports that U of L is no longer an option for the former Western High School star.

It's a shame. If he can ever get his academics straightened out he'll end up having a solid college career somewhere.

Eric Crawford has the complete audio of Rick Pitino's appearance at the Cardinal Caravan last week. Spoiler: he makes a joke about the SEC that Kentucky fans brush off and take in stride.

Louisville has offered a scholarship to Cakeb Azubike, a defensive end out of Nashville.

U of L basketball recruit Malik Price-Martin (love three-named people) has been named to the USA Basketball U-16 team.

Louisville's Matt Hughes repeated as the national champion in the 3,000-meter steeplechase over the weekend. His coach, Ron Mann, had this to say.

Any coach who uses "props" is one I'm happy to have at U of L. Congrats to Matt.

When I run a Goolgle news search for "Louisville," they have this little section at the bottom for "archived news" that includes three stories from the past, and the one at the very top right now is "Michigan State stuns top-seeded Louisville." What function does this feature serve other than making me scare the dog? If I'm looking for a tidbit about something that happened a while ago, I'm going to run a regular mother f---ing Google search.

Stop over-thinking, Google, you're only hurting yourself. And me. Or only me, I guess.

And finally, Tony Woods may not be headed to Texas after all, but Matt Jones tweeted Sunday that there is still no way Woods ends up at Kentucky. Way to think things through, Tony. It's probably the most regrettable impulse decision you'll ever ma---...oh...right.