Sorry to disappoint, but my MarraFan427-imposed blogging break officially comes to a close today.  Really, we couldn't have planned the baby at a better time.  Between an entertaining NBA finals that I could watch and stop watching without any worries and no UofL games whatsoever, the first hectic weeks could be enjoyed fully and without any juggling or missed action.  But people don't care about other people's kids, so let's move on to the reason we are here: 18 year old men.

Specifically, the four new 18 year old men who will play defensive line for the University of Louisville Football Cardinals this fall.  BKAC 2009 and 2010 were, let's be honest, exercises in wishful thinking and sullen realism.  Also too, it was hard finding video or any information whatsoever about some of the guys Kragthorpe brought in.  Half of the people I wrote about in 2009 and 2010 never made it onto campus.  My predictions about last year's guys? Pretty good, except instead of starting all year, Rhoades never showed up.  And I'm not sure what happened to Lacy Coleman, but he too did not make the team.  I'm sure it's all my fault.

But now we are in a 4-star era of Cardinal recruiting.  Charlie Strong and Clint Hurtt are pulling in bigger recruits and guys who should be ready to contribute right away, like BJ Butler did last year at DE/hybrid.

In sum, it's a lot more fun to write these this year.  The WRs and Safeties posts should be pretty exciting too, if MarraFan427's diaper and feeding schedule allow it.  But today, let's meet: your 2011 freshman defensive linemen:

Starting with Mengus's favorite, Jamon Brown.  I can't find the tweet or source, and he can confirm or deny in the comments, but I think this guy is who Mark is the most excited about from our class.  The staff is so excited about him, they listed him on the roster twice!  A local monster, the 6'4", 300 pound (according to Scout) or 6'6" 327 lb (uoflsports.com) DT from Fern Creek should get the chance to play right away.

Brown committed early and didn't get much national interest, likely because he was solid for us from the getgo, but Rivals and Scout both have him a 3-star.

CardsFan922 Prediction: Breaks Elvis's single game and single season sack record.  Just kidding, just kidding.  We aren't as thin as we have been in recent years, with guys like Jamaine Brooks, Brandon Dunn, Roy Philon and Randy Salmon all splitting time in the middle, so he will not start and maybe not see much action in the first couple of games.  But, as the year goes on and if anyone gets banged up, expect more and more Jamon Brown.  And more and more "I told ya so" tweets from Mengus.

A late edition to the 2011 recruiting class is Atlanta, Georgia defensive end Lorenzo Mauldin.  There were some worries about him qualifying, but he's listed on the official roster (link above, also you know how to find it) and was not mentioned as one of the three freshman from the 2011 class who isn't here yet.  Originally either committed to or thought-to-be-a-lock for South Carolina before they oversigned, Mauldin decided to join the Cards in March.

The full story on Mauldin is worth reading, but the gist is that he has been a part of the juvenile protection system, bouncing between foster homes and group homes, for most of his life.  After committing to SC really early, he was told the day before signing day - via fax, classily and 1980sly - that they wouldn't have room for him because of a certain highly rated youtube star.  Again, academic issues played a part, but apparently he was able to get those resolved.

On the field, he's someone we will be lucky to have and who should benefit from 4-5 years of quality coaching:

Also, who doesn't love the nickname "Big Purp"?  Either way, with young talent like Marcus Smith, BJ Butler, Malcolm Mitchell, his higher rated classmate (see below) and seniors Greg Scruggs (who is moving back from DT) and William Savoy (who is going into year seven as a Cardinal), I can't imagine we see much of Mauldin this year.

CardsFan922 Prediction:  Finally have the luxury to redshirt a guy like this.  And "Mauldin was in 17 foster homes" becomes an oft-repeated announcer fact, along with the classics like "Brohm's brothers and father..." "Bush and Brohm played a memorable..."  "Lefors parents....", "Larry O'Bannon went to the same high school as...." "CardChronicle is Charlie Strong's ninth favorite blog" and "Mike Marra is the best high school shooter..." etc, etc.

One guy who will not be redshirting: BJ Dubose, a talented DE out of the talent-rich Miami area (Broward County, for those who remember Recount or follow high school football recruiting very closely, either of which means there is something wrong with you).  Originally committed to the Canes, Dubose flipped and went with the Cards.  Apparently he picked Miami over LSU and FSU, among others.  So, ya, he's kind of a big deal.

Because: he was the Broward County Defensive Player of the Year, according to Freneblogger and professional creep Jody Demling, recording 60 tackles, 11 sacks and 1 interception as a senior. 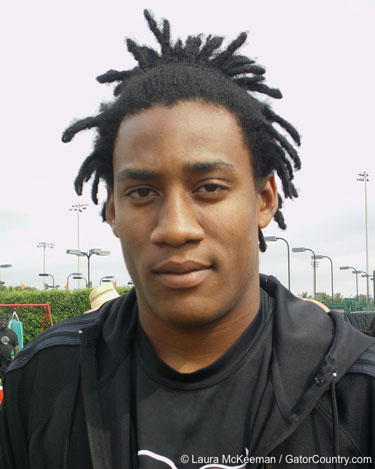 Here's some video of him getting that aforementioned interception and, I'm getting technical here, wrecking dudes:

CardsFan922 Prediction:  There is all of a sudden a lot of talent on the defensive line, especially guys who played a lot as true freshman.  But the opportunity to have BJs at both ends is too good to pass up, and Dubose will join Butler on the line for a lot of snaps in 2011 and beyond.

Finally, Scout's site lists Deiontrez Mount, a 3 star out of Ft. Walton Beach HS in Florida, as a commit, but he is not listed on the uoflsports.com roster.  Accordingly, I will assume that this is just someone who a Louisville family accidentally brought back with them from spring break with their grade school aged kids until proven otherwise.  In terms of 2011 impact, Mount is probably the least likely of the group to have one.

So there you have it.  Unlike BKACs past, it actually may matter how much better you know Jamon Brown, BJ Dubose and Lorenzo Mauldin after reading this.  The future is bright, and guys like these are one of the reasons.

Charlie Strong, don't you ever f'in leave us.  Ever.