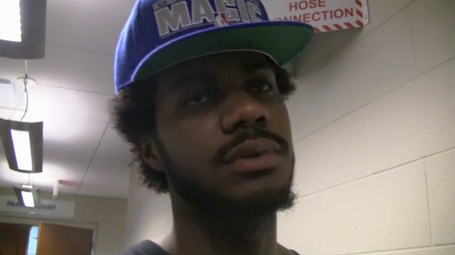 Get me past beer three, and I WILL be doing my Earl Clark impression for you. That's a Woodrow F. Call-strong promise.

I love that man.

Evan Daniels tweeted on Tuesday that both Louisville and South Carolina had backed off of their pursuit of Dayton transfer Juwan Staten. The point guard had originally been scheduled to visit U of L yesterday.

I'm not going to act like I'm not disappointed, because this news leaves Louisville with a giant hole at the point guard position both right now behind Peyton Siva, and entirely whenever Siva is gone for good. Kevin Ware can be a solid player in a couple of years if he's willing to put in some considerable work, but every indication is that he's not the answer at the one, which is almost certainly where he'll get an initial look.

I understand that Ware is 6-4 and athletic, but that alone isn't going to get the job done in the Big East. This isn't Conference USA where Taquan Dean could walk the ball across midcourt before making a simple pass to Francisco Garcia to start the offense. We're also not Providence, who can score 88 on any given night but can also finish with a turnover mark approaching 30 and consistently has a "teen" at the end of their final Big East resting place.

Being able to get out in transition and make plays on the fly is a huge asset for any college point guard, but in the Big East you're not going to be able to make it through a season without having to consistently handle tough, physical ball pressure. Ware didn't handle those situations particularly well at the high school level, which means it'd be foolish for any of us to think he's not going to have a problem handling them here. At least not right away.

A day after tweeting his displeasure about not getting enough positive attention for his charity work, John Calipari was at it again during the SEC meetings in Destin. Cal used the platform to call out Duke for its culture of flopping, and to blast the Big East for getting too many teams into the NCAA Tournament and then underperforming.

I eagerly anticipate your response.

Football season is (sort of) back, as the Cardinals began their summer conditioning with a nice 6 a.m. running session.

First day of a new season. This is where it all starts. We can't settle on what we did in 2010. We lose 25 seniors. Who is gonna step up?

Adding to the excitement was the news that all but three of the freshmen class of 2011 were enrolled in school and working out with the team, meaning  - among other things - that eligibility is no longer a concern for either B.J. Dubose or Lorenzo Mauldin. The three freshmen who aren't yet in town (Eli Rogers, Gerod Holliman, and Mike Romano) are all high-profile guys, but they are reportedly good to go for July.

Never got around to talking about this, but the Louisville baseball team made a valiant run in the Big East Tournament, winning three games in three days before eventually falling one win short of making it back to the championship game. The Cards are missing out on the NCAA Tournament for the first time in five years.

The Least Cool Person Tournament kicked off Tuesday, and it looks like Ted Driscoll and Central Florida are each locks to make quarterfinal appearances. Two more first round matches are on the docket for Wednesday.

There have been lots of rumors about Russell Smith looking to transfer, but after a trip back home to New York, the sophomore-to-be will be back in Louisville this weekend. As will Rakeem Buckles, whom CardsFan922 recently creeped out at the airport. 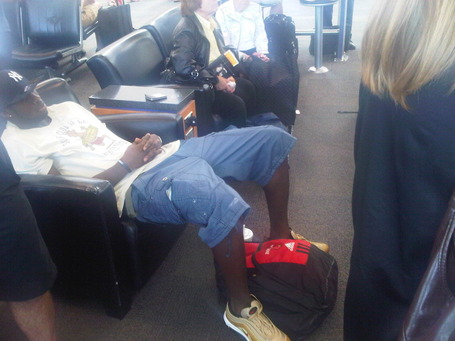 Jeff Walz continued to be awesome on Tuesday by landing commitments from the daughters of Tick Rogers and Anthony Epps, who are both stars at Marion County High School.

Ken Lolla added three more transfers and a late signee on Tuesday. One of the transfers comes from UCLA, which is also the team Louisville will open its season against at home on Aug. 27.

Finally, check out Eric Crawford's column this morning for a handful of positive quotes from Tom Jurich on the current state of the Big East.