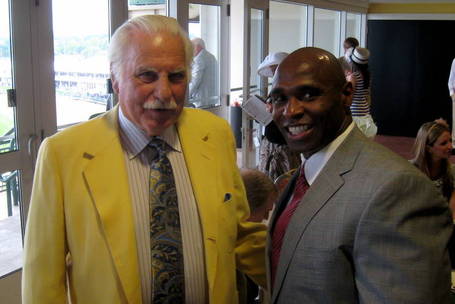 The sixth-seeded Louisville baseball team fell to Pittsburgh 7-2 in the opening game of the Big East Tournament this morning. The Cards will play in an elimination game tomorrow morning at 10 a.m.

Sid Vicious and Nancy Spungen Brandon Bender and Ken Caldwell are back in the news as each spent the bulk of his Tuesday on Twitter bragging about how they would take down Rick Pitino Wednesday night on an Orlando radio station. Because that seems like a solid way to break into college coaching. Way to think it through, boys.

Here is Bender's full interview with AllKyHoops.com. Bender and Caldwell hit the airwaves tonight at 6:30 in an interview that is almost certain to disappoint everyone.

I learned something about Central Florida fans yesterday. If you link a story where their program is being disparaged, they will sign you up for a host of homosexual newsletters.

Sports Illustrated's Andy Staples unveiled his post-spring college football top 25, and surprisingly had Louisville listed as one of five teams that "just missed" a national ranking. The Orlando Sentinel is sticking with its No. 87 ranking.

A day after the Big East's annual summer meetings, Jim Calhoun stated his belief that the conference will eventually split into separate football-oriented and basketball-oriented conferences. He also referred to Central Florida as "not a sexy name." C'mon, Jim, they came within 10 points of beating Southern Miss at home. That's pretty f#$%ing hot.

Congratulations to Teddy Bridgewater, who made the Dean's List in his first semester at U of L.

West Virginia is looking into an incident at a casino involving offensive coordinator and head coach-in-waiting, Dana Holgorsen.

Multiple sources told the Charleston Daily Mail Holgorsen was removed from Mardi Gras Casino & Resort after 3 a.m. May 18. Holgorsen had been at a Mountaineer Athletic Club function earlier in the day in Logan before spending the evening at the casino with other university representatives.

In a statement released late Tuesday night, Michael Fragale, the assistant athletic director for communications, said, "Athletic director Oliver Luck and head coach Bill Stewart have been made aware of the alleged incident. Once they have all the facts, they will deal with it appropriately."

The statement was released not long after a Daily Mail reporter left a voice message for a football program official asking if the university was aware of the incident involving Holgorsen.

Holgorsen's behavior allegedly reached a point that necessitated involvement from on-site security, sources said. Holgorsen was escorted out of the casino with the episode caught on surveillance. University representatives who were with Holgorsen were said to have then intervened. No arrest was made.

"We had other guys who were more highly recruited and had more hype than me. Coach Cal would rather live with their mistakes than my mistakes. I am happy to have the opportunity to show people I can do more than what I showed at Kentucky."

Still probably right on the fringe of my five least favorite Cats of all-time, but I enjoy the quote.

And finally, former North Carolina State point guard Ryan Harrow will reportedly announce his transfer decision by Friday. Dime Magazine and Harrow himself have seemed to hint in recent days that Kentucky is the new favorite here, with Georgia serving as UK's main competition.

I wish this were an "oh well" situation, but we could really use this kid.