Best of Carmody's Corner: Memories from the Road

Share All sharing options for: Best of Carmody's Corner: Memories from the Road

As the Cardinals get ready to travel to Jonesboro, AR, it got me thinking about all of the road trips I took during my time as a Cardinal.

First off, there is nothing like playing a huge home game in Papa John’s Cardinal Stadium.  I am sure all college athletes would say the same thing about their respective schools.  But to me, there's nothing better than traveling as a team into another city and dominating on the field. We always called our road games business trips.  Treat it like business, beat the tar out of someone, and enjoy the trip back to Louisville.

There are usually a lot less distractions on the road, which is good, because as a team you need all the focus to go into an opposing stadium and pick up the win.  I started writing this and was listing some moments I thought were funny, but as I was re-reading it I realized that the only people who would think it was funny were the kickers and punters...and probably Hunter Cantwell.  So I scratched that and thought I would go with random questions that I answered myself.  I am sure you could ask any different player these questions and get a ton of different answers.

I was one of the few players to go 0-3 in Tampa.  I dressed and traveled to the game during my red-shirt year in 2003, and then played and got blown out there in 2005 and 2007.  However, it was always a neat place to travel to because it was in Florida, we got to play in an NFL Stadium (Raymond James Stadium), and you got to meet a lot of the player's families because we had so many guys from the state.

Army is simply just awesome and I am a little biased.  The history of the place combined with the cadets in the stands makes it a great place to play.  Quick side note, my younger brother Harrison was a plebe (freshman year) in 2004 and was at the game that year.  It was great having him and some of my family at the game.   He is currently at Fort Hood in Texas where he is an Apache helicopter pilot.  He still roots for the Cards.

This one will get a whole article later on in the season but it's also the winner here, hands down.  I have only been once and don’t plan on going back anytime soon.

Honorable Mention:  Syracuse – Didn’t get to see much of the town when we were driving through, it could be a great city, but nonetheless I just wasn’t that impressed.  Also the way the dome is at the top you can kind of see through and see all of the clouds that were coming and going.  Therefore the sun would be shining through but then the clouds would come and it would get dimmer and dimmer. Drove me nuts.

Awesome fans.  They show up really early.  We had an 11:00 am kickoff and they must have been in their seats at like 8:00 am because we hadn’t even come out for the pre, pre-game warm-ups and the student section was packed.  They were very knowledgeable about the game and afterward were a lot of fun to talk to.  They kept calling us over after the game and it was one of the few times in my career that I can remember most of our players going to shake hands with the opposing teams fans.  Classy.

Honorable Mention: West Point – A whole bunch of Cadets just pumped to see a good football team play.  In all honesty they have much more on their plates to worry about than talking smack to the opposing team.

I understand it was a huge game in 2006 with a lot of national implications, but they must have been tailgating since the Monday before the game because they way, way too rowdy.

Honorable Mention: Syracuse – I am basing this one on how much smack they talked to me, a kicker.  It was non-stop the entire game.  I guess that is what happens when you have season tickets right by the kicking net and your team has been terrible for so long.  Even the little kids who were sitting in the area wanted to make fun of me.   I also thought it was great that these little kids were trying so hard to come up with stuff but always came back with "you suck" and "Cardinals aren’t scary."  Really? There is a smiling orange blob walking around your stadium.

NFL stadiums always had the best music because they had better sound systems and more music to choose from.  However, Rutgers played nothing but New Jersey music.  It was non-stop Springsteen and Bon Jovi with a little hip/hop just to keep them honest.  I always thought that was cool.

Hate to say it. I don’t know who makes the mix CD’s, but they are not that impressive.  There were many a time when we would be doing pre-game Field Goal/PAT and Harry would look up to me and ask me why the music was so bad or if I had ever heard the song before.  Even if I had heard the song before I would never admit it to Harry because it might have knocked my street cred down a little bit. 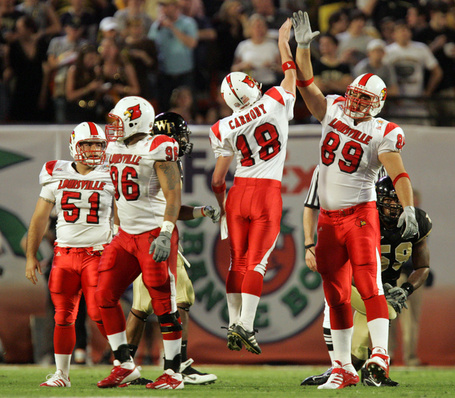 Song I used to like but now only brings bad memories:  "Country Road" by John Denver.

West Virginia plays this song over their speakers after every win, and unfortunately I have heard it twice.  They also played it non-stop in our weight room the entire week before we played them in 2006 to remind us of what happened in 2005.

Best Show to Watch at Hotel:  Dateline’s How to Catch a Predator, How To Catch an ID Theft...pretty much anything Dateline.

I don’t know when this show started, but in 2006 Dane Mattingly and I got hooked on it. If there was a good football game on that Friday night, we would usually watch the game.  If not, then it was all about Chris Hanson and catching the predators.

When I Realized I WAS in Kansas: Kansas State

Nothing but flat land and a lot of wind.  I remember looking out of the hotel window at the vast horizon just waiting for a tornado to pop up.

Another side note to the Kansas State game:  Each week we would receive a little laminated card with the itinerary for the whole weekend. It pretty much had everything down to the minute from walk-thru times to meal times, etc.  It also listed the time we would leave the hotel and the time we would arrive at the stadium.  It was usually never wrong and if we were ever off, it would be for maybe a couple minutes.  On this Saturday, the police escort took us about twenty-five minutes longer to get to Bill Snyder Field. On the bus I kept pulling out my card wondering where the heck we were going because there were no signs, landmarks, etc. that implied that we were anywhere close.  Coach Petrino was pissed when we finally got to the stadium and rightfully so.

Worst Elevators:  Hotel at Pittsburgh in 2006

You are probably wondering why I am writing about the elevators.  It is because you have about 60 + football players all trying to go to the same meetings, walk-thrus, and meals at the same time.  Also you have all of the other patrons at the hotel who are just trying to enjoy their stay in town.

We played Pittsburgh during the Thanksgiving weekend so it was already packed to begin with.  There were maybe two working elevators and a lot of floors at this hotel.  It wasn’t a good combination.  You would always enjoy the expressions on people’s faces when the elevator would open up and there would be twelve players crammed on.  "We will take the next one" was a common response, but the bad news was that the next one usually had the same result.

We stayed at a Doubletree in Memphis in 2004 and in Nashville in 2006.  When we were checking into the hotel the staff was handing out individual cookies to everyone.  I fell in love with these cookies and thanks to my roommate, Dane Mattingly, we had a huge supply.  Doubletree cookies and a little Dateline NBC, what could be better?  They sell these cookies online (yeah, I’ve checked).

Worst Road Game Purchase:  Dane Mattingly and this Knife that could "cut through anything"

While at the hotel in Piscataway, NJ there was an infomercial about this knife that could cut through bricks, tires, train tracks, leather boots, etc.  Dane really thought he could use one of these for his toolbox and decided to pick up his cell phone and order one.  He was far too pumped, and if I am not mistaken, spent about $35 on it.  Naturally, it was too good to be true.  A few weeks later he got this knife in the mail and it could not cut through a piece of paper.  He then tried to sell it for $40 to some of our teammates by using that same infomercial in his sales pitch.  Got to love the entrepreneurship, but beware of those infomercials.

I roomed with Brent Moody, former punter, my freshman year.  He was always playing World of Warcraft on his computer.  I never really understood that game but anytime I see the Warcraft commercials I think of Brent.  I roomed with Dane Mattingly the next three years and I wanted to take this moment to mention one of the best long-snappers Louisville has ever had.  The other snappers were all named Mattingly as well, as he continued in a long line of awesome Mattingly’s at U of L.  No matter whom we were playing I would always get nervous and uptight on game days. Dane would keep things fun and in perspective.

In 2007 we were in Tampa, FL and as we were getting all our stuff ready to head to the game there was a piece of paper with "Thanks For the Memories" written on it.  I saw it and said "Dane, who are you thanking with this note?  Is this for anyone in particular?" He started laughing and said "No man, I was just reminding myself to download that song 'Thanks for the Memories' by Fall Out Boy."  I am not sure if he ever downloaded that song, but thanks for the memories, Dane.  You are the man.

I could go on and on about road games, but I’ll finish this up.  The best part about the road games was silencing the fans by playing Cardinal football.  I tell people this all the time: there is nothing better than when the opposing team’s crowd is roaring and then somebody makes a big play.  It is like turning the volume dial all the way down really fast and then embracing the sweet sound of silence.

The Cardinals silenced the Oregon State crowd for a while a few weeks ago and they will silence the Arkansas State crowd Saturday night for good. Get it done. GO CARDS!!