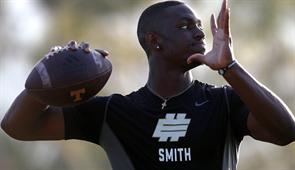 I've been reading many comments both here and at other Louisville athletics sites predicting that the recent NY Times and ESPN articles will help DaMarcus Smith win his LOI release appeal and you might be right. Some are very excited to rekindle the Smith vs. Bridgewater debate that we had all dreamed of and want to see Smith in a Cardinal uniform this fall. I hate to say it, but honestly I don't think these stories bode well for Smith ever playing for Louisville. With the suspicion that Smith's mother may have accepted, planned to accept, or even discussed accepting impermissible benefits from these runners/agents, I can't see UofL taking a chance on Smith.

The NCAA set an ugly (from a national popularity standpoint) precedent with Cam Newton last year and they are itching to prove that was an exception, not a rule to judge that if a player didn't know Mamma/Daddy was on the take they are absolved from violating their amateur status. The NCAA would love to show that dealings with runners will not be taken lightly. Coaches have been crying about it for years. One Heisman has already been returned. Another was almost lost before it was handed out. In other words, the hammer is ready to drop, the question is merely who will it fall on.

Considering that DaMarcus' demeanor throughout all of this recruitment would suggest that he was being pressured by his mother ("business decision" language a big clue), I think it would be hard pressed to say that DaMarcus wasn't aware of the shadiness surrounding Bender, Carter, and Caldwell making deals with his mother. If it were proved that the Smith's were even entertaining offers of impermissible benefits, DaMarcus could be declared to have violated his amateur status and thus ineligible for competition with ANY NCAA school.

For Coach Strong and Louisville Football, the burden of proof will rest with the Smith family to prove they didn't accept or plan to accept benefits from any runner, agent or even UCF. Typically, it's pretty hard to prove that you didn't do something, since tangible evidence of not doing something is difficult to produce. Not to mention that if fires are lit at UCF, you can bet that UCF (rightfully so) won't hesitate to throw Smith and his family under the bus if it helps their case.

Smith could always join the team, subject himself to a NCAA investigation and wait to be cleared. But those types of investigations under Smith's circumstances take years to complete. Newton's decision was lightning quick only because it was mid-season and Auburn was competing for the SEC Title and obvious invitation to the BCS Championship, not to mention that Newton was a extremely high-profile player, while Smith is at best just an elite recruit.

With Louisville football on the rise, I'm not so sure that Coach Strong and the staff can afford to take a chance on DaMarcus. No player, no matter how loved or how sad the circumstances, is worth risking penalties or season vacations for the rest of the team and football program.

So Card Chroniclers, what are your thoughts on young DaMarcus Smith and his potential future at Louisville?