Share All sharing options for: Aaron Horton signs with the Columbus Crew

After just one collegiate season, Aaron Horton - the breakout star of Louisville's run to the national championship game - has signed with the Columbus Crew of the MLS. 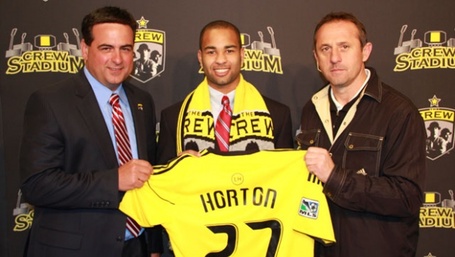 From the press release:

A native of Lewis Center, Ohio, and product of Olentangy Orange High School and the Crew Soccer Academy, Horton spent one season at the University of Louisville, in which the Cardinals advanced to the NCAA Men’s College Cup for the first time in school history and finished as the national runner-up. He spent the 2009-10 season with CSA and was a member of the Crew’s 2010 USL Super 20s National Championship team last summer, where he was named tournament MVP.

"I’m ecstatic, it’s a dream come true to sign with the club I grew up following and rooting for," Horton said. "I’ve been going to games at Crew Stadium since I was a kid, then played in the club’s youth development program and (former Crew star) Brian Maisonneuve was my coach in (U.S. National Team U17) residency. Jeff Cunningham was my favorite player when I was a kid and to be his teammate now blows my mind."

In his one season at Louisville, the 5-9, 165-pound Horton, who turns 19 on Thursday, appeared in 23 games, scored three goals and added two assists. Two of the goals were dramatic game-winners in high-pressure situations. He came through when the stakes were highest, scoring in the final minute of both a 5-4 quarterfinal victory over UCLA and a 2-1 semifinal win over North Carolina, to send the Cards to the College Cup final, where they fell to Akron.

Best of luck to Aaron at the next level.