Share All sharing options for: Cardinal Thursday news and notes 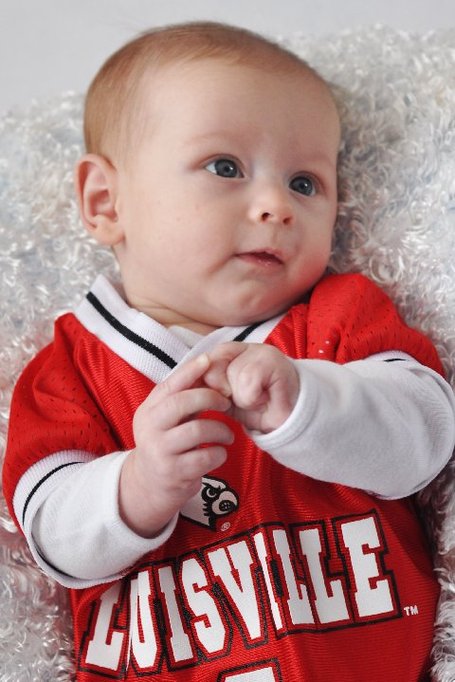 Jeff Walz landed the No. 8 overall player in the class of 2011 when 5-8 guard Bria Smith chose Louisville over Tennessee on Wednesday. The combination of Smith and Shoni Schimmel in the backcourt will be worth the price of admission alone.

U of L is the site for the 2011 Big East softball tournament, which kicks off tomorrow. Louisville is the No. 5 seed, and will begin play in the single-elimination tournament against South Florida tomorrow night at 6:30 p.m.

As much as I'd love to see the Cards take the title (they've never won the tournament when it's been played at Ulmer), I also wouldn't mind seeing USF and DePaul face off in the title game. The two met last weekend and the Bulls head coach pulled his team off the field after accusing DePaul's skipper of instructing his pitcher to deliberately hit batters. Would be a tasty final.

The recruiting saga of Rodney Purvis continued on Wednesday as he reportedly dropped Florida from his list of top four schools and replaced them with Louisville.

Shoutout to Marist Nation, y'all.

Some sad news as former Michigan star Robert "Tractor" Traylor passed away on Wednesday at the age of 34. He suffered a heart attack in Puerto Rico where he was apparently trying to stage a comeback. The worst part about the story is that he was on the phone with his wife when it happened.

Thirty-four is far too young. Rest in peace.

On a much happier note, Minnesota head coach Tubby Smith announced Wednesday that he is completely free of prostate cancer. He then urged all men to get prostate exams. Gross, dude.

Jeff Goodman continues to stay higher on the 2011-2012 Cardinals than any other member of the national media, slotting Louisville at No. 5 in his latest preseason top 25.

Congrats to former Cardinal quarterback Stefan LeFors, who was named the new head football coach at Christian Academy on Wednesday. LeFors also announced that he will not be working on U of L football radio broadcasts this season.

Brian Bennett wrapped up Louisville's spring football season and deemed the following three questions as the biggest ones heading into the fall.

1. Manning the corners: Cornerback was a position of need heading into the spring after the loss of starters Johnny Patrick and Bobby Burns. It remains a major concern going into the summer. The Cardinals looked at Jordan Paschal, Anthony Conner, Preston Pace and others this spring and even moved promising freshman receiver Charles Gaines there toward the end of practice. The return of Darius Ashley from injury should help, but big questions still linger.

2. Rebuilding the offensive line: The strength of Louisville's 2010 team was its veteran offensive line. This spring, that experience was nowhere to be found, as four starters graduated and the lone returnee, center Mario Benavides, sat out with a knee injury. Ryan Kessling and Alex Kupper have played as backups and should crack the starting lineup. The rest of the line is unproven and will need to continue to develop as a unit.

3. Finding big-play targets: The Cardinals struggled to stretch the field in the passing game last season, and they don't return much production at receiver. Senior Josh Bellamy established himself as a go-to guy there this spring, but the unit was thinned out by injuries this spring. Some talented newcomers are on the way this summer in DeVante Parker and Eli Rogers, and Louisville hopes Michaelee Harris can contribute after two unfortunate knee injuries. There should be more speed at wideout this season, but it will be awfully young.

One tennis publication believes Louisville is the super sleeper of the tournament.

And finally, the men's soccer team announced their schedule for 2011, which includes three rematches from the Cards' magical run to the national title game a year ago.

Louisville opens the season on Aug 27 (also the birthday of International sex symbol Mike Rutherford) against UCLA, and will also face Ohio State and North Carolina.