Share All sharing options for: Cardinal Tuesday News and Notes 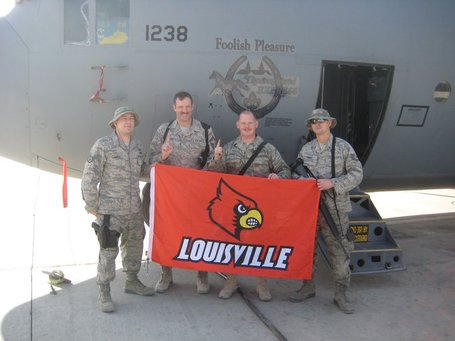 Finals season has officially come and gone, but the omnipresent combination of a sense of urgency and impending doom is still hanging around for whatever reason. I'll be happy when it passes. Anyway, thanks to all of you for bearing with me over the past couple of weeks. It feels good to be back. USA.

Lots of buzz on Monday surrounding the potential transfer of quarterback Tyler Gabbert - Blaine's little brother - from Missouri to Louisville.

Gabbert, a four-star recruit in the class of 2010, once committed to Nebraska thanks primarily to his close relationship with then-offensive coordinator Shawn Watson. Watson is now the quarterback's coach at U of L. Gabbert redshirted the 2010 season, and thus would be a sophomore when he became eligible in 2012, putting him in the same class as Teddy Bridgewater.

As long as he's fully aware that playing time isn't likely to be any easier to come by down here than it is at Mizzou, I'm all for taking Gabbert. Kid can throw it.

Terrence Jennings surprised most by staying in the NBA draft, but the Cardinals won't sneak up on anybody next season as they did this past one. Louisville will once again be a tough out and a team that should be a top-four Big East contender throughout the season. Kyle Kuric will be joined by newcomers Wayne Blackshear and Chane Behanan to bolster an already Rick Pitino-esque lineup.

Kevin Where Ware continues his refusal to release us from the painful grip of his spring recruiting saga, as he announced late Sunday that he plans on visiting both Louisville and Georgia at some point this month.

At this point, I'm completely content with my interest in his recruitment encapsulating nothing more than showing up at the Red/White Scrimmage and seeing if he's on the team.

A pair of former Cardinal athletes (one of whom currently serves as an assistant volleyball coach at U of L) won a cool million dollars by winning CBS' The Amazing Race. Gianiny and Current would totally repeat if given a shot next season.

The Cardinal baseball team will face chief-rival and the nation's No. 1 team Vanderbilt on Tuesday night at 6 p.m. as part of "Patriotic Night" at Jim Patterson Stadium.

Louisville will wear commemorative jerseys and hats with a unique patriotic Cardinal logo during the game and fans are encouraged to wear their Red, White and Blue in support of the event. Admission is free for the game, which will be aired live on the radio by KOOL 1570 AM and televised live throughout Kentucky by Wazoo Sports.

Any member of the military with a military ID will receive a $1 dinner buffet at the Patterson Stadium concession area and the first 800 fans through the gates will receive coupons for $1 hot dogs. The first 200 fans through the gates will be entered into a drawing for a free U of L team hat, and it will also be Boy Scouts of America Day at the ballpark.

U of L is still struggling at 25-23 while the 'Dores are 40-6 and ranked in the top three of each of sport's major set of rankings. The pair have played a handful of classics over the past few years, including winner-take-all regional finals in each of the past two seasons. Vandy ended Louisville's season at Jim Patterson a year ago with a suicide squeeze in the bottom of the 10th.

Couple of friends were hanging out in the same are  as Gorgui Dieng at the Oaks on Friday when Rick Pitino walked buy and yelled out, "Hey, Gorgui! Gorgui, I'll buy that suit off you for five dollars!"

He said it with kind of an Italian accent. I can't do it, but, you know.

And finally, it became official on Monday that CBS and Gus Johnson have parted ways. The only way I'm OK with this is if it means Gus is calling every Kentucky Derby from now until the day he dies...and that he's available for hire to call special occasions throughout my life.

Rutherford back to the betting winndddooowwww...HaHa!