Elisha Justice involved in tournament...not that there's anything wrong with that

Share All sharing options for: Elisha Justice involved in tournament...not that there's anything wrong with that

Let's see just how lightly my Internet footprint can tread.

Louisville freshman point guard Elisha Justice has been named as an eight-seed in a 2011 Hottest Male Athlete tournament. The tournament is being hosted a website whose tag line is: "for guys who like sports and guys."

Justice currently leads his first round opponent, Spanish soccer star Cesc Fabregas, with 83% of the vote.

Here's the region Justice is trying(?) to advance out of: 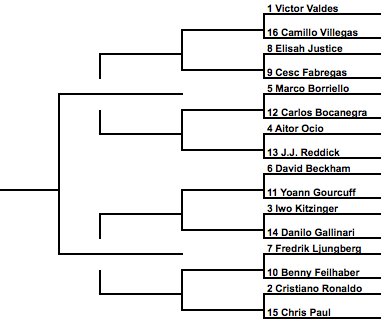 It's a compliment, Elisha.