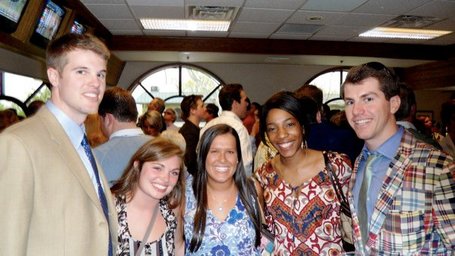 A trio of female Chronicloids were lucky enough to bump into the former super-walk-on duo of Chris Current and Brad Gianiny at Keeneland last weekend, and they snapped this photo. Safe to say that Brad's doing pretty well for himself. And that he stole my Derby outfit.

I hate saying things like this after a kid commits because it's become almost a cliche for fan bases spurned by 17 and 18-year-olds, but Kevin Ware picking Central Florida truly is not that big of a deal. Ware's a talented kid, there's no doubt about that, but he received far more attention than he would have under ordinary circumstances because he was essentially the only name in the Cardinal recruiting world over the past couple of weeks.

The thing about Ware - and you have to think that this played a large part in his decision - is that he wasn't going to come in and play very much. There was zero chance of him cutting into Chris Smith or Wayne Blackshear's minutes at the two, and then even if he didn't have to deal with either of those guys as a sophomore, he still would have been left competing for minutes with (fingers crossed) Rodney Purvis.

Ware is advertised as being highly athletic, but turnover prone and lacking a consistent jump shot. Basically, he would have fit in perfectly at Tennessee under Bruce Pearl. I think he could have been a good player here with a combination of hard work and patience, but you can't blame him for pursuing another opportunity. He'll be a nice player at UCF.

The bigger story, at least in the eyes of Louisville fans, is that Ware committed to UCF just a day after an in-house visit from Rick Pitino. Given recent events, it's easy to get flustered and take a half-hearted shot at Pitino here, but more likely than the kid not being impressed by what Louisville's head coach had to offer is him simply not liking the reality Pitino laid out for him.

There were not going to be significant minutes immediately available for Kevin Ware at Louisville, and my assumption is that Rick Pitino in some way made the young man aware of this. It would explain the seemingly odd timing of the decision, as Ware will be in town playing in the Derby Classic this weekend.

It's like breaking up with a girlfriend four days before the wedding of two close, mutual friends. Except this is way creepier. And there's dunking.

A guy who would help right away is Wake Forest transfer Tony Woods, who is apparently rethinking the idea of suiting up for the Cardinals now that Tim Fuller is being employed by Missouri.

I was vehemently against taking Woods when the news first broke in October, and definitely wouldn't shed a tear if he chose to take his game and backstory elsewhere now. That being said, there's no question that Woods would help next year's team right away. You can also multiply any significance he would have by three or four if Terrence Jennings opts not to return for his senior season, which is still a very real possibility.

Even if the primary reason he came to Louisville was Fuller, Woods has to know that he had a hall-of-fame coach stick his neck out pretty significantly for him, and the fact that the young man is even considering other options at the moment seems pretty disrespectful.

For every Nate Harris there's a Willie Williams. Who knows on which end of the spectrum Woods will end up falling, but he's not exactly giving us any great reason for optimism right now.

Some quick recognition for our four Down the Stretch/Spring Game contest winners:

Thanks to everyone who played and congrats to the winners. I look forward to having blacked out conversations about Art Carmody with you in a few weeks.

Seneca defensive lineman Tyrone Pearson has (again) decommitted from Louisville and is now moving to Indianapolis for his senior season. Safe to say the kid's got some things he needs to get straightened out before he's ready to be a contribute on a Division-I college football team.

"Vic's had an unbelievable, unbelievable spring. The way he worked all spring. He was healthy. He practiced every day. Guys just watched him work, and it was just amazing for guys to watch him come out and go to work."

Despite Jeremy Wright's tremendous freshman season, I think Vic is clearly heading into fall camp as your starting tailback. If he can reel of 1,000 yards as a senior, the 2008 Big East Rookie of the Year would become the first Cardinal to post multiple 1,000-yard seasons since Calvin Prince (1976, '77). Considering the backs this program has had come through in recent years, that would be quite the achievement.

I mentioned this on Twitter, but my first final exam is next Monday, so don't expect a whole lot from me over the next couple of weeks. I'd also prefer it if you referred to me as "Jake Brigance" between now and then. It's a psyche thing.

Wayne Blackshear will miss this weekend's Derby Classic (and accompanying festivities) because of the shoulder injury he suffered during practice for the McDonald's All-American game.

"I am really disappointed," Blackshear told The Courier-Journal. "I really wanted to be there. It’s in the new arena and all the fans are coming out to see us play.

"I’m disappointed but I’ll be OK. They cleaned it out and it’s going to be fine. I’ll be 100 percent once I go through rehabilitation."

And finally, we'll leave you with a laugh as Yahoo's Jason King says Texas Tech's hiring of Billy Gillispie was the best in college basketball.

In a related tidbit, this post was the catalyst behind the first death threat I ever received. It seems pretty prescient now.

Enjoy your Tuesday, and remember that until we can see each other as equals, justice is never going to be even-handed. It will remain nothing more than a reflection of our own prejudices.