Share All sharing options for: "Down the Stretch" Derby Eve Auction & Party

If you're still looking for something to do on Derby Eve and missed your chance to share a beer with (Almost Snapping) Eric Wood during his time at U of L, well then I'm about to make your day.

Former Cardinal football stars and current NFL players Brian Brohm, Eric Wood, and Breno Giacomini are hosting the inaugural "Down the Stretch" Derby Eve Auction & Party on the evening of May 6 at the Zirmed Building on Market St. Proceeds from the auction will benefit the Best Buddies Kentucky charity, a nonprofit organization that seeks to create opportunities for one-on-one friendships, integrated employment, and leadership development for people with intellectual and developmental disabilities.

If you're like me, you usually pay better attention when these things are broken down into "5-year-old birthday party invitation" form, so let's do this right.

WHAT: "Down the Stretch" Derby Eve Auction & Party

HOW DO I GET IN?: You can prepay on the event's website, or contact Eric Weining at downthestretch@live.com for individual tickets or table and group rates. (DOUBLE SPOILER ALERT: Or you can win a CC contest and go for free)

WHO CAN COME?: The event is 21-and-up (sorry, Austin), and you're supposed to "dress to impress," which I'm almost positive entails wearing pants.

WHAT'S AT STAKE?: The chance to drink, dance, and celebrate the biggest weekend in Louisville with a trio of Cardinal greats, some of their college and pro teammates and friends, Mike Rutherford, Ms. CC, Least Valuable Fan nominee Rob Hinners, Mike "Mr. Cardinal" Gleason (working on it), and more.

If you're looking to do something at least semi-up-scale on Derby Eve, you're really not going to find a better deal than this, and I'm not just saying that because it's being spearheaded by some former Cardinals. Plus, my last law school final is the day before, so the odds of me making a scene and getting kicked out before midnight are pretty respectable. Bring a flip cam.

CONTEST: Card Chronicle has obtained four tickets to the Down the Stretch Party and will be giving them away via a Spring Game-related contest, the rules of which will be unveiled either during the day on Thursday on Friday morning. I'm not sure exactly when because I'm so lazy super important and busy.

Anyway, keep your eyes open for the chance to enter and win. And even if you don't win, you should go, it's gonna be a good time. Gleason gets one white wine in him and he instantly starts Movin' Like Bernie. 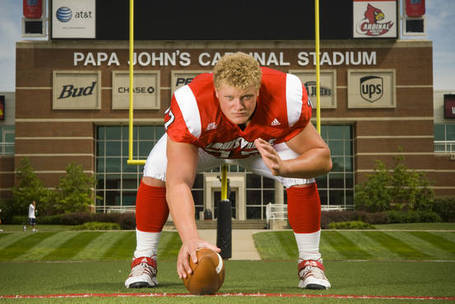 ***Mike Rutherford autographed 8th grade football pictures will be sold at $325 per print. All proceeds will go to the Preston Knowles Rules/Mike Rutherford Debt Foundation.