I think we're getting a tad spoiled by these senior days.

Both seniors played and performed admirably, and the team came away with a decisive and significant victory. All in all, an extremely satisfying evening.

Very cool to see Preston get his first double-double in his last home game.

I think the shot to end the half also sort of exemplified his Cardinal career. He's actually out-of-bounds when the original shot is taken, hustles to get his hands on the ball, throws a shot over his head which goes in, according to the game clock he got it off in time, but according to the light behind the backboard he didn't. In the end, somehow, two points for Louisville.

Also worth noting is that the shot was No. 1 on SportsCenter's top plays this morning/afternoon (it was No. 2 last night), making it the fourth Cardinal highlight to assume the top spot on the feature this season.

Kudos to the kids who had these shirts made: 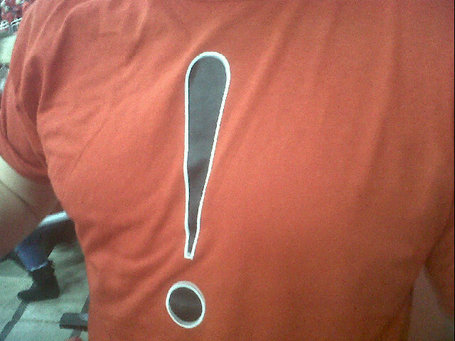 That counts as your ! for this wrap.

Very glad that George Goode started and scored early, and that he was able to get back into the game late and score again. I was hesitant to write anything extensive on George since I'd heard some late rumblings that the scholarship situation might work out in a way which allowed him to finish his college basketball career here, but apparently that's not going to happen. Still, he's got another year to play somewhere and there are rumors that he might end up staying in the area.

George smiles as much as any Louisville player I've ever seen, and he's that type of unheralded guy with a contagious personality who can really do wonders for the chemistry of a team. He's also not without talent, and I really think he could have a great last year at a smaller school and then parlay that into some sort of professional career.

People forget that he was the most pleasant surprise on the team early on during the '08-'09 season, but an injury forced him out for an extended period of time and led to the emergence of Terrence Jennings as Samardo Samuel's capable backup. Still, we'll always be indebted to him for his performance in the Kentucky game that year.

People also forget that he's been a fairly solid contributor for a decent chunk of this season. He scored eight points in 15 minutes in the 25-point win over St. John's, and put up seven and six in the thrilling comeback win over Marquette. There's a very real chance that we could need George Goode to play some key minutes over the next few weeks.

He also had perhaps the biggest feel-good moment of senior night when he paused in the middle of his postgame speech and said: "Man, I really don't know what else to say...I'm just so happy right now."

I think it's a huge story that Kyle Kuric scored 25 points on a night where he didn't shoot the ball particularly well. That's not something you ever thought you'd be able to say as recently as a couple of months ago. It's not a coincidence that this team's rise to prominence has coincided with his drastic increase in aggression.

I was very nervous that no one had documented this, but thankfully Frank came through. 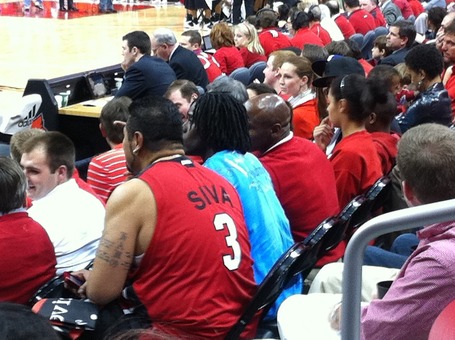 That is Super Bowl MVP Deion Branch sitting in between Peyton Siva Sr. and Charlie Strong.

When this was happening I've never been more distracted from a game.

The Bryce Cotton text messages I received after he buried the three from Cotton's Corner, was fouled, and then somehow managed to convince the officials to give Providence the ball back were hilarious. Once you could tell that the Friars were going to lay down (mid-first half), I was openly cheering for Cotton.

I again tried to explain why to Ms. CC, and for about the seventh time it ended in confusion and frustration.

Bryce missed some open looks in the second half, but he made a great behind-the-back move on a fast break and then, like Preston, made SportsCenter's top plays...for getting swatted by Gorgui.

I think he'll be better once some of the current Friars move on.

If some of the players are going to wear these new jerseys and others aren't, can we at least make sure that they look similar? It was really bizarre seeing three guys with insanely tiny numbers and lettering and everyone else looking so different. Also, the way they bunch up around the chest is not flattering.

Don't ask me to choose which picture I like more... 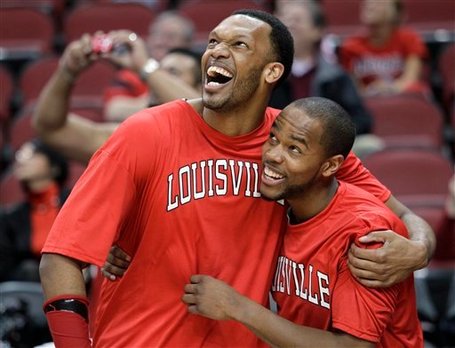 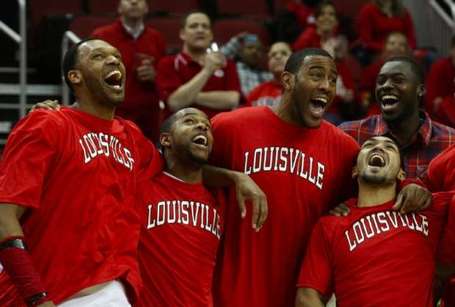 I didn't think it was possible, but watching Providence, and Marshon Brooks in particular, made me even more thankful for this team we have.

When it became apparent that U of L was going to make Brooks earn anything he got, he folded. There was one play in particular where he turned the ball over, didn't even try to run back to the other end, watched Kyle Kuric hit a three from the spot where he was supposed to be playing defense, and then yelled at his teammates after Keno Davis called timeout.

He tweeted this after the game:

that 52 got me drawing to much attention...i can't breathe on the court smh

The Marshon Brooks' of the world draw attention, but they don't win championships.

I'm hopeful that someone will have video of the postgame senior speeches, but here's a quick summary of the events:

--George was pretty much on cloud nine and thanked everyone who had supported him profusely.

--Preston pulled out a piece of paper and had a long list of people he thanked. He also said "can I get a hot tub!?" twice.

--Pitino was very happy when announcing to the crowd that Louisville had completed a perfect Big East home season and clinched a double-bye for the conference tournament.

--The Courier has some good videos of the pregame stuff as well as some locker room interviews from after the game.

--Maybe the coolest part of the game experience was the extended highlight video they played before the game which included the best plays/moments of the season set to an Usher song (I don't get to listen to much music anymore). It was really well done.

Not sure how many of you all picked up one of the senior day posters, but look at it and tell me that Preston doesn't look dead up like Larry O'Bannon in that picture. You could tell me right now that the marketing people made a mistake and that the picture actually is of O'Bannon and I'd believe you.

Louisville has now won four straight games against teams ranked in the AP Top 25. The Cards achieved the same feat twice in the 1950s, but U of L has never beaten five straight top 25 teams.

Can someone figure out a way to photoshop me into the middle of this picture? 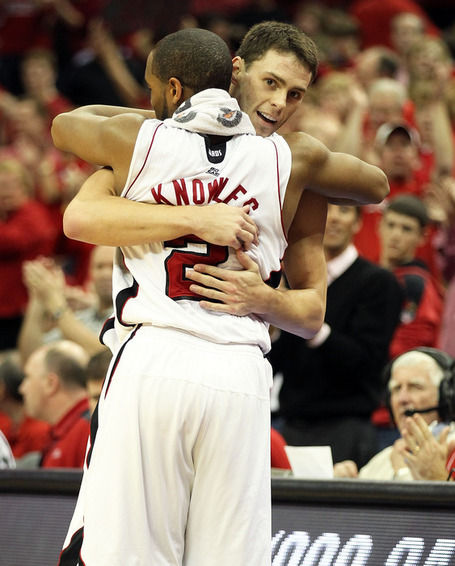 Preston and Kyle are reaping the majority of the praise for this late-season run, but there's no doubt that Peyton Siva is making this team go, and no doubt - at least I don't think there is - that he is currently the player most vital to Louisville's success.

He took just four shots, but Siva again controlled the game to near-perfection, handed out seven assists, snatched six rebounds, and came away with three steals. He's really becoming the player we all hoped he would.

The folks working for the Providence athletic department kept a photo gallery of the team's trip to Louisville. The following picture was originally included, but has since been deleted. 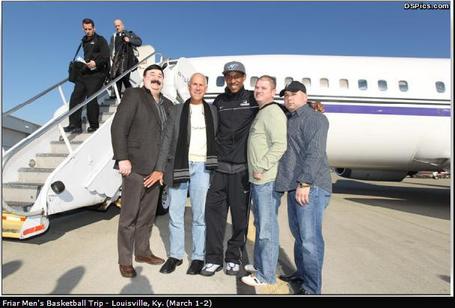 Was really disappointed to see Mike Marra go 0-5 from three, and he he showed some rare obvious frustrated after missing the last one.

We have a handful of guys in mini-shooting slumps, and I'd like to go ahead and get that remedied fairly quickly.

Last year's Louisville team will forever be remembered for the last game in Freedom Hall, but that's it, because they basically lay down after that. They gave a half-hearted performance and were upset by Cincinnati in their first game in New York, and then looked stunned when Cal punched them in the mouth early during their first game in the big dance and never really recovered.

I don't think last year's team deserves all the flack they get from some, but Edgar Sosa's first statement on Selection Sunday a year ago was pretty telling.

You can't look past a great team like California, but I definitely feel like we match up pretty well with Duke and would definitely love to get a shot at them.

Translation: you can't overlook anyone in the NCAA Tournament, but that's exactly what I'm doing.

This year's team is not going to do that. When/if someone ends their season, it won't be because of a lack of effort, execution, or focus on the side of the Cardinals, and I think that's all we can ask for.

Again, it's been a tremendous season, but now is not the time to celebrate. This group still has a healthy amount of basketball to play. I'll assume everyone reading is thankful for that.