Share All sharing options for: An Internet Letter to 2010-2011 Cardinal Basketball Team, Chronicloids

The following is an Internet letter.  That's sorta like an email, but broadcast to the public.  At least the .000001% of the public who read this 'blog.'   I don't expect any of the team to read this, of course.  Maybe Tim Henderson.  Really, this is more for me.  Because the odds are, this team will lose another game in the month of March.

It might happen Thursday.  Ken Faried is the real deal, and the longer he keeps them in the game with second chance points and monster dunks, the higher the chances for an upset.  We've been the underdogs so long, I can't remember the last game we were "supposed" to win as big as this one.  Rebounding teams have killed us all year, and Morehead will be playing with quite a chip on their shoulder.  I'm terrified.  Of course, I would be terrified if we were playing St. X in the first round.  That's just how I approach March.  More on that later.

The season might end Saturday.  Richmond is the dreaded 12-seed, defensive-minded conference tournament winner.  Vandy has 3 point shooters everywhere and beat UK.  We joke about the SEC, and I'd rather have Vandy than K-State or WVU, and maybe even Arizona, but still, Vandy isn't an easy out.  And losing to an SEC team would seriously suck.

Then, Kansas.  My God, Kansas.  They are big, fast, athletic, have senior guards, and along with Ohio State, are the only team that has been very impressive all season.  Lots of upperclassmen.  There would be no shame in losing to them in the Sweet 16.  Making the Sweet 16 was many people's "best case scenario" this year, and many considered that so unlikely that it wasn't even worth mentioning.

A few weeks ago, there was a debate about where this team would stack up against the all-time favorites, and most people (me included) said that the tournament would definitively answer that question.  The 2005 team is a fan favorite not only because they went to the Final Four, but because of all the amazing games they won on the way.  The 2009 was a favorite because of the Big East championship, the overall number 1 seed.  1997 had Wheat, Sims, a freshman Nate Johnson, Denny in his last really good year, and made it to the Elite 8 despite tough injuries.

But I've changed my mind.  I've decided that this team will be equal in the memories to the 2005 Final Four team -- even if they lose Thursday to Morehead State.  How many times have we commented/tweeted/written in crayon on napkins in restaurants/said out loud to an annoyed spouse: "I love this team so much" over the last few weeks?  I for one have done it a ton.  Not just the comebacks, but the way they comeback.  The constant energy, Siva driving to the rim, jumping, twisting and seemingly lost, until at the last second he finds Kyle Kuric wide open in the corner, and an instant later seeing 15 "KSTK" comments pop-up in the open thread.  Preston!  TJ's King Kong dunks, George Goode's mid-range jumper, fans begging for SVT to get minutes, then him coming in and immediately pulling down tough rebounds.  Preston!  Knowing that no matter how much we are down, no matter how much the refs are screwing us, no matter how the shots aren't falling or the other team is making ridiculous shots, KNOWING that there's going to be a run.  And watching them doing it, you don't know how they are doing it, but they are, and then when they tie it or take the lead on a wide-open three. 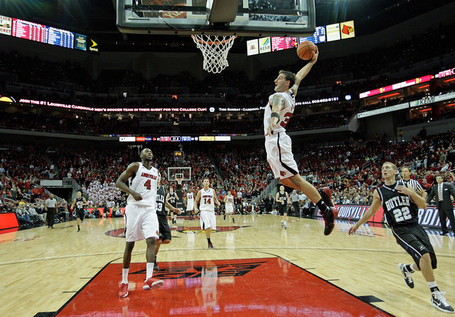 There were so many memorable moments this year.  Not just the big ones (Butler game to open the Yum!, Kyle's dunk, all of Siva's plays against UConn in 2OTs, the UConn game at Yum!), but the small ones, too.  Like Kuric knocking the ball out to Marra for that last look against UConn in the Big East Championship.  Like the indescribable sound the lower level the Yum! Center made in the first half against UConn the first time Kyle got the ball in the corner wide open for 3, a mix of anticipation, excitement and joy, and the shocked-but-forgiving sound when he missed.  Charlie Strong in the background of every big play at the end of the UConn game, the first guy up to pump his fists.  Like the Providence game. Check out the passing starting at the 1:52 mark.  People who like soccer/football would describe that sequence as the closest basketball can get to the "beautiful game."

What is happening here, Bob, is that the 2010-2011 Cardinal basketball team is and will be a fan favorite that we will talk about and compare future teams to for literally years. If not decades.  In this day and age of 1-and-done 5-stars (a few of which we'll be adding in the next few years) and the KembaJimmerization of the game by ESPN, this is truly a basketball team in every sense of the word.

So thank you, 2010-2011 Cardinal basketball players, for giving us a season and so many moments that we'll never forget.  And thank you guys and the 30% of you who claim to be gals, for making this the best place on the Internet these last 5 months.

And this season has been made so much better because of the CardChron community, here and on Twitter.  Game threads, FanPosts, post-game comment threads, memes and inside jokes that are tough not to make in real life to other UofL fans to secretly see if they read the blog.  T-shirts.  SivaBear.  Seriously, PEYTON SIVA'S DAD HANGING OUT WITH A FIST-PUMPING CHARLIE STRONG.  It's really hard to imagine a better season.  Well, with a deep March run...

The point is this post is that, deep down, I really hate March.  My natural pessimism before games comes from a huge fear of this season ending, and somehow thinking that if I saw it coming, I would be more prepared.  It never helps.  There's extra pressure on the team, the fans, the coaches, everyone.  You know that for all but just one team, it will come to an end in heartbreak.  Even in 2005, that feeling after coming back against WVU will always be tainted by that feeling of helplessness as Roger Powell, Jr., followed up his own missed 3 with a dunk, and then that feeling of wanting to punch every Illini fan who staked out the exit ramp trying to buy your championship game tickets. The memories of Francisco Garcia will always be shaded by the bad game he had in St. Louis.  That's just how it is. 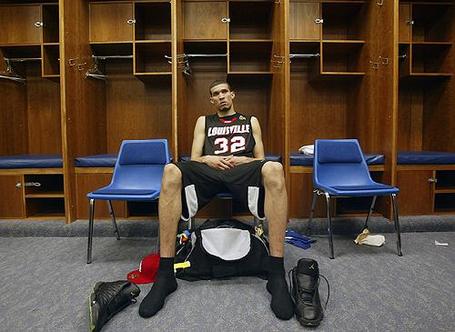 There's extra pressure this year because this team deserves so much more recognition than they are getting, and, everyone says, a deep run in March is what makes teams memorable and gets them in the conversation with 2005, 1997, 1986, and 1980.

So this year, I'm taking a different approach.  Regardless of what happens Thursday, or Saturday, or next week, I'm changing the rules for this team.  Lose at the buzzer to a 13 seed?  Would hurt badly.  Lose by 10 to Vandy?  Rough  day.  Get run off the floor by Kansas?  Well, they are just a better team, so no shame there. But no matter how bad the loss is, it doesn't change anything whatsoever about this season.  Tournament runs are fun, but one or two or even four games are no match for the months of joy, excitement and goodwill that this team gave us this year.

If we get to the Final Four?  Best season ever.  If we lose in the first round?  Still one of the best seasons ever.  No pressure. And more than anything else, I'd like to close by saying one thing to this team:  no matter what, because of what you did from November through last Saturday in New York City, March cannot break our heart this year.