Again we have to move quickly, both because there is another game to play in a few hours and because I'm still not sure that any of what will be described below actually happened.

Louisville winning game where it trailed by 16 points in the second half is impressive enough, but throw in the fact that their opponent was Notre Dame and the feat becomes almost unbelievable. The Fighting Irish are one of the most offensively efficient teams in the country, and they've run their "burn" offense to perfection several times leading up to this tournament.

But, as multiple people said at the start of the second half: "if any team can do it, it's this one."

I wasn't 100% sure we were going to lose when it was halftime, or when we fell behind by 16 after the break, but I will fully admit that I surrendered hope twice. The first time was when we made the huge run to cut the lead to four, and then Carelton Scott promptly buried a three and we responded with a turnover. Bill Raftery called it an "early dagger," and I thought he was right. The second time was when Siva fouled out. Never doubt Preston Knowles.

PK's tip in of his own missed jump shot was one of the more amazing plays of the season. We were all debating who had actually gotten the tip, and then couldn't believe it when the replay showed Preston taking the 15-footer and then reappearing in the screen from seemingly out-of-nowhere to get the huge putback.

Also, after all the talk in the wake of the West Virginia game, it was amazing how confident he appeared at the free-throw line with the game essentially hanging in the balance. Kid's the real deal as far as leadership is concerned. He's also now a mere four-points away from becoming Louisville's most improbable 1,000-point scorer.

Kemba Walker's going to win the tournament's Most Outstanding Player award tonight whether his team wins or not. The thing you can say about Preston that you couldn't say about the best players on some of our other teams is that he absolutely will not care, so long as he's wearing the champions t-shirt after the game.

Terrence Jennings could not have been more clutch towards the end of regulation and in overtime. The free-throws were obviously enormous, and I'm still not convinced that we win if he doesn't get that key putback of Preston's miss in the lane.

He also probably deserved a foul call there. 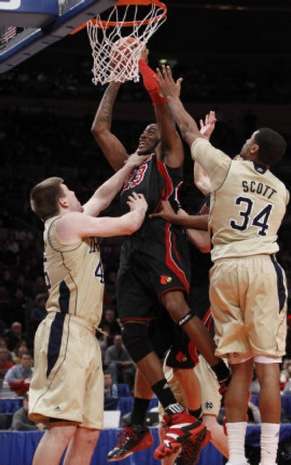 Gorgui Dieng had a pretty miserable offensive night, but then you look at the box score and see that he had eight rebounds in 15 minutes. Like I said yesterday, this team makes individual criticism really difficult.

Seven assists and one turnover for Peyton Siva, who again was outstanding outside of committing some absent-minded fouls.

Kyle Kuric continues to play like Larry O'Bannon with an incredibly solid 14-point, six-rebound performance. The three he hit to cut the lead to one in the second half and the short shot in overtime couldn't have been more important.

Notre Dame chose to play way off of Chris Smith, and I really think that rattled his psyche a bit. He finished just 1-of-11 from the field, but did make some really key plays in overtime.

Louisville held the Big East Player of the Year to 3-of-16 from the field and forced him into six turnovers. Decent.

Whatever you did the last two days, do it tonight. If you're going with your girlfriend to see Lady Gaga (Shmaniel Shmudd), you're probably dead to me.

I just cannot wrap my mind around the fact that the 2010-2011 Louisville Cardinals will play for the Big East championship tonight. I think I speak for all of us when I say that regardless of what happens tonight or next week, I could not love this team any more. They've taken a season that was feared by many - including myself - and turned it into one of the most enjoyable experiences I've ever had as a fan. It's a feat that is all effort and heart, and they should be a model for every group that dons the red and black from here on out. 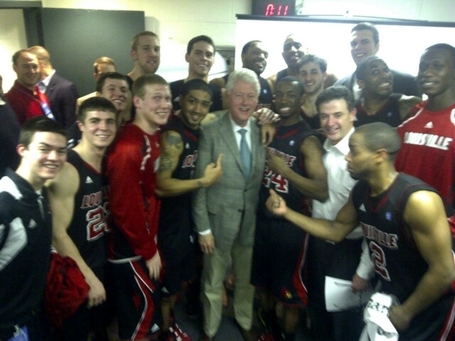