Sometimes in life you just have to look yourself in the mirror and learn from your mistakes.  After I finished typing the blog up late last Thursday night, that is exactly what I did.  I realized that I had taken a week off and had not given it my full attention.  I then did some soul-searching and realized that there was one guy I could turn to, a guy that never took a day off, who played with injuries, who played with passion.

I then went to my next choice (should have been my first choice), and turned to Doug Beaumont.

I have mentioned many times on this blog how much of a fan I am of Doug and felt that this was the perfect time to turn it over to him.  I e-mailed Doug a bunch of questions and he quickly responded, but I expected nothing less from such a high character individual.  I respected the way that Doug came into the football program in 2007.  He did everything that was ever asked of him, and did it well.   He was a quiet leader that set an example for all of the freshman that he came in with and even for some of the older guys.

I now turn it over to Doug "Mr. Football" Beaumont.

Doug on his recruitment

To be honest, growing up I never really thought about going to Louisville. I always watched the Florida schools and I was also a Tennessee fan. While attending middle and high school my sister was a ladybird for UofL, and going to the home games and watching them win and become so successful started to grow on me. I eventually chose Louisville because they were becoming nationally known and I wanted to be nationally known as well.

I was a local kid and watched players like Brohm and Bush come through the program and be treated like royalty because they were from Louisville. I thought, why not me? After Louisville won the Orange Bowl I knew I was going to win big as a Cardinal, but then Petrino left. I actually found out through ESPN that he was leaving. People asked me what I was going to do, and I was honest and said I didn’t know. Coach K was very promising when he came in and I looked at the returning roster and knew we still could have success, so I kept my commitment.

Doug on maturing and becoming a leader

As a freshman I was more of a learner. Looking at me from an outsider's point of view I wasn’t the fastest receiver, or even the smartest, but I loved to learn. I was fortunate to have some great receivers playing ahead of me; Harry Douglas, Mario Urrutia, Trent Guy, and Scott Long just to name a few.  I watched these guys and they helped me with technique and learning how to get open in certain coverages, etc.  I took what they taught me with the coaches that I had and worked extra hard in the off-season. I knew to become a great receiver took a lot of practice, so throughout my four years I never really took time off. Whether it was doing drills, running routes, or even watching film, I wanted to make sure I was ready for that next season.

Doug on his favorite and least favorite moments at Louisville

My favorite moment was when the clock hit zero at the Beef O' Brady’s bowl.  I’ve never felt such a relief in my life. To know that some people thought it was a rebuilding year and the adversity I had with my injury, and to be able to go out there and not only make a bowl, but win it was incredible. I loved every moment of that.

My least favorite is probably the losing. I came from a high school where, at most, you lost two or three games a season. It was tough losing. It sometimes made me get down on myself because I felt like I was supposed to help keep a winning tradition, and I didn’t.

Doug on his first TD

It’s funny because in high school I scored 91 touchdowns in my career. In college, I just knew once I started playing I would score a lot.  Freshman year I spent most of my time as a special teams player and didn’t get the ball enough to score. When I became the starting wide receiver as a sophomore I knew it was my time to shine and get in the end zone. I led the team in catches, but couldn’t score. At first it was fine, but eventually it became so aggravating to hear people talk and joke around about it.

My junior year, toward the end of the season, we were playing WVU. I finally scored a TD in the back of the end zone and felt this huge sense of relief. To look over and see a flag on the ground was unbelievable. After that game I cried because I knew I probably wouldn’t get another shot.

Becoming a senior and being the leading receiver with no touchdowns was not a great look to have. People started questioning me, so I knew it had to come someday. When I finally scored against EKU I felt like a monkey was finally lifted off my back. I've never felt so happy in my life. Behind the bowl game, that was my second best moment as a Cardinal. 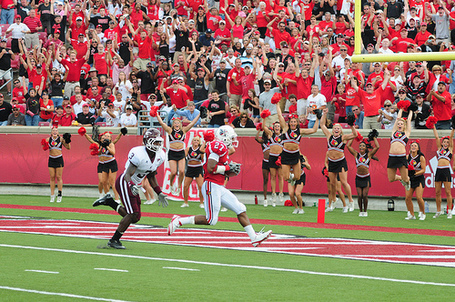 Doug on "Teach Me How To Dougie"

I love the song "Teach me How to Dougie." It’s fun to know that when that song comes on and you know me as a player, you point to me and go: "Doug, this is your song".  I remember after I scored, I heard the song and people were celebrating. I wanted to do the dance so bad but I remembered that I was on the kickoff team and had to go back on the field.

During a basketball game they interviewed me and they asked me if I knew how to do it. Next thing I know the song is on. I ended up getting stage fright and chickened out. Still to this day I get joked on because I didn’t do my own dance to the song.

On the Bowl Win

It was the best game of my life. I had some key plays personally, but just being able to go out on top as a Cardinal and seeing my teammates and fans celebrating, I've never had a greater feeling in my life. I wouldn’t change anything about that game, and it will always be the biggest memory I had as a cardinal.

Doug on the seniors and the future of Cards football

One thing I felt our senior group had was heart. Going into the season there were no big names or one player who did it all for the team. We were a unit, and we knew this program wouldn’t change if we didn’t make it change ourselves. So we put it in our head and our hearts that it was time for a change, and we did it.

With the help of a superior coaching staff I feel like the senior class was just one-stepping stone to the Cardinal Nation rising again. I cannot wait to see the upcoming years. With the recruiting classes and the returning players, people will be like, "who is this Louisville team winning like this?"

Doug on his favorite kicker

I was fortunate to play with some great kickers at UofL. Chris Philpott was a unique athlete, but I would have to say Art Carmody was the best.

Coming into Louisville as a freshman you always wonder what the big time players look like. Well you had Brian Brohm and Harry Douglas, and then there was Gary Barnidge and Eric Wood. Well I not only looked for them, but I looked for Art Carmody. Why wouldn’t I want to see the top scorer on the team? It was great to have a song after you, but why not have a phrase that numerous people use as your name: "The Artomatic". That right there said it all. It was great to be a teammate of one of Louisville’s and the nation’s best kickers.

*Art Comment:  I told Doug that this was a loaded question.

Doug on the fans

I just want to tell all the fans thank you. I know we didn’t have the best years when it came to winning, but there were some fun times.

I will never forget how loud the stadium got when I scored my first TD, or on senior day when I came down the ramp. I left Louisville football knowing that I was loved. Now I know one thing people will always remember me by is how long it took me to score, but that’s not all I want to be remembered for. I want to be known as a great all-around guy. How hard I worked on the field and off. How you saw my character stand out. I want to be able to one day be in Louisville and need a job and have someone help me out because of the way I was as a person at the University of Louisville. 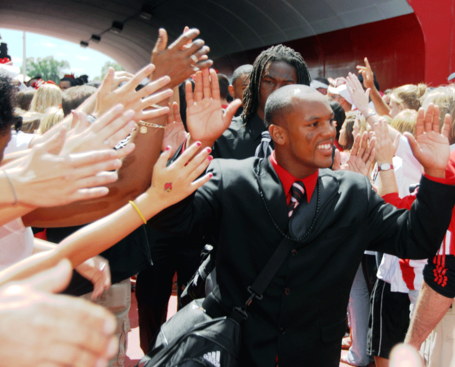 There wasn’t a happier person in the whole state of Louisiana when Doug scored his first touchdown than me, and he is one of the reasons (along with some of the other great seniors on this team) that I made sure that I was attending senior day this past fall.  After the game I went by the player’s gate to see some of these guys, and the look on Doug’s face symbolized just how much this program and that game had meant to them.

Even though I am a few years older than Doug, I have no problem saying that I looked up to him these last few years.  It is easy to go out and put everything on the line and bust your butt when you are winning, but incredibly difficult to do when you are losing.  There were a lot of players over the past few years who did just that, took off days.  Doug never did.  That is not only a testament to Doug, but also to the entire Beaumont family for raising such a fine young man.

The game of football mirrors the game of life in many ways, and whether it is a career in professional football or a career in the corporate world, Doug will be successful.

Thanks Doug for choosing to be a Cardinal and for being a great representative of the program.  All of us former players are proud of you.