1. The major story from New York on day two became the major story in college basketball. In the final minute of an eventual two-point St. John's victory over Rutgers, an officiating trio headed by the oft-criticized pair of Tim Higgins and Jim Burr missed two painfully apparent Red Storm fouls, and then St. John's player Justin Browlee carrying the ball out-of-bounds with a little under two seconds left on the clock.
The calls (or lack thereof) had various members of the sports media calling for the trio to be banned from both the rest of the Big East Tournament and the NCAA Tournament. The NCAA's head of officiating called what transpired at the end of the game "unacceptable," and the Big East released an official statement admitting that mistakes had been made.


2. After the game, Rutgers head coach Mike Rice - who was probably the star of the tournament's first two days - drew almost universal praise for the classy manner in which he handled the controversy.
A sampling of his statements:

"Was there a mistake made? I saw it on YouTube," Rice said. "There was a mistake."

The coach paused, measuring his next words with care. "There is going to be blood coming through my tongue right now, but it’s what it is," he said. "We’re going to control how we respond."

You can hear more on his postgame interview with ESPN.

3. For the first time since the tournament expanded to include all 16 teams, more than one of the teams forced to play on the opening Tuesday have advanced to Thursday's quarterfinals. Ninth-seeded Connecticut breezed past a Chris Wright-less Georgetown, while No. 11 Marquette looked as good as they have all season in a six-point victory over defending tournament champion West Virginia. The Mountaineers became the third straight Big East Tournament champ to lose their first game in Madison Square Garden the year after hoisting the trophy.

No team seeded 9-16 has advanced to the semifinals since the expansion of the tournament. Cincinnati beat Rutgers and Louisville a year ago before becoming the first victims of DaSean Butler's MSG heroics.

St. John's/Rutgers garnered the vast majority of the attention on Wednesday, but the nightcap featuring West Virginia and Marquette featured the highest quality action of the day.

The Golden Eagles absolutely solidified a spot in the NCAA Tournament by getting 15 points off the bench from Junior Cadougan and a pair of key late three-pointers from Darius Johnson-Odom to upset the sixth-seeded defending champs from Morgantown.

Marquette beat West Virginia the way West Virginia beats other teams. The Golden Eagles scored in the paint, won the rebounding battle (32-29), and forced the Mountaineers to try and beat them from beyond the arc. They couldn't, and Buzz Williams' squad will face Louisville Thursday night.

Walker took full advantage of a Georgetown team still looking lost without injured point guard Chris Wright, torching the Hoyas for a tournament-high 28 points to go with a team-high six rebounds and three assists. The runner-up for conference player of the year appears to be playing with a bit of a chip on his shoulder.

PICTURE OF THE DAY 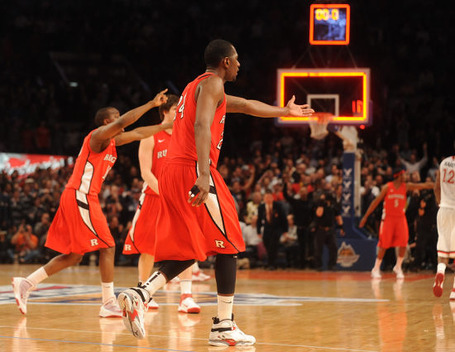 QUOTE OF THE DAY

A QUICK LOOK AT DAY THREE

--Pittsburgh and Connecticut were both unbeaten and ranked third and fourth in the country, respectively, when they opened the Big East season against one another on Dec. 27. The Panthers rolled to a double-digit victory and a wire-to-wire league title, while the Huskies finished at .500 in the conference and were forced to play on the tournament's opening day. Kemba Walker is playing like a man who wants America to know that he should have been the Big East Player of the Year, and it will take another Herculean effort from No. 15 on Thursday for UConn to become the first team forced to play on the tournament's opening Tuesday to advance all the way to the semifinals.

--St. John's and Syracuse will do battle in the day's second game for the temporary title of kings of the Garden. The Orange have been notoriously tough to beat inside the world's most famous arena, and trounced the Red Storm - which was otherwise almost unbeatable at home - there 76-59 earlier in the year. This game will be well-attended.

--Notre Dame, which dominated the Big East's postseason awards, will begin its quest for a championship and perhaps a No. 1 seed in the NCAA Tournament against Cincinnati in the opener of the evening session. The Irish have never won the Big East Tournament. For the Bearcats, it's still all about respect.

--Louisville overcame an 18-point deficit in just over five minutes to stun Marquette when the two met during the regular season. It's no surprise that the Golden Eagles took special notice of the potential for this matchup to occur when the brackets became set at the beginning of the week.