A few of the fine folks at ESPN felt the need to take some shots at Louisville's four-point victory over DePaul on Saturday night. Doug Gottlieb (the classiest man in the business) actually went so far as to adamantly agree with the notion that the Cardinals had "a lot" of work to do in order to get their resume up to NCAA Tournament standards.

Although in Gottlieb's defense, only having to win three of your last eight games does constitute "a lot of work" for people who steal credit cards from roommates.

The fact of the matter is that winning any Big East game without your leading scorer, rebounder, and shot-blocker is an accomplishment worthy of praise. Regardless of the extenuating circumstances, a loss to DePaul would have been an enormous blow. And despite the ugly manner in which it occurred, avoiding this blow was a big deal.

With Preston(!) out, we absolutely had to have someone step up and have an uncharacteristically high scoring performance, and thankfully Kyle Kuric was willing to play that role. Every one of Kuric's 19 points were needed...well, I guess except three, but whatever. He also snatched some crucial defensive boards down the stretch and did a great job in the back of the zone.

Bob Valvano actually said during the game that Kuric should get married in that left corner where he shoots so well from three. That's right, a Kyle's Korner and wedding reference all in one comment.

What's up, Bob? Work in something about a camel next time to let us know you really care.

Despite an 0-for-8 performance from the field (which included a missed dunk), Peyton Siva was huge. He dished out ten assists and appeared to be the only Cardinal capable of breaking DePaul's surprisingly staunch man defense.

I believe Siva was on the bench for six offensive possessions. On those six trips we had no made baskets, three turnovers, two missed shots, and one shot clock violation (so four turnovers).

If that back injury forces him out of the game, we lose. Plain and simple.

The fact that we essentially played six guys Saturday night is amazing when you look at our roster and how many players Pitino has used from day one of this season. After the game, coach P called having to deal with all these injuries "the most agitating, annoying thing I've experienced in my coaching career."

It's also the second most agitating, annoying thing I've had to deal with in my blogging career. KentuckyWild checks in at the top spot. Truckloads of female fan mail is third. I don't know how they keep getting my home address or why they choose to hand-write these things when they obviously have at least a basic understanding of how the Internet works.

I've seen Cleveland Melvin a few times now, and I stand by my first impression that he's very good, but doesn't have the room for growth that a lot of the other freshmen in the league do. The player he is now is basically the player he's going to be three years from now, which is awfully good, but he's not like Jeremy Lamb or Gorgui Dieng, guys who are only going to get better as they grow into their body and adjust to life in the Big East.

Brandon Young is also already a player, and he has the potential to become one of the better guards in the league by the time he's a junior. 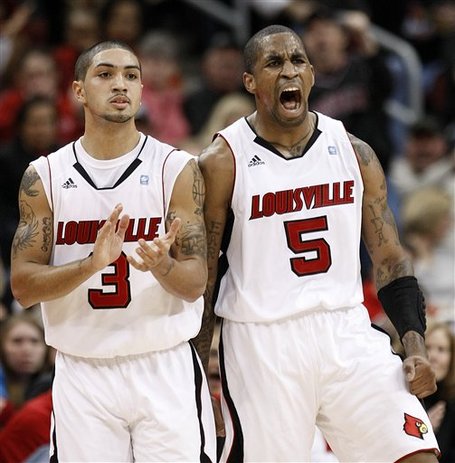 Underrated performances from Terrence Jennings and Stephan Van Treese, who both performed the thankless task of "not blowing easy baskets around the rim" to perfection. They also had 14 rebounds between the two of them.

I did rhyme "losses" with "sausages," which I think is at least enough to warrant a spot on Young Money.

Louisville's lack of depth forced Pitino to go with a healthy dose of zone for the first time this season, a move which resulted in season lows for fouls (10) and steals (6). Also, not being used to playing so much zone certainly helped contribute to the bevy of clean looks the Blue Demons got from beyond the arc in the first half.

Not being able to pressure the ball and create turnovers = no cheap buckets and having to find ways to score out of your halfcourt offense. The result is a four-point win over a team that lost to Cal-State Northridge by 22.

"Bending, bending" guy didn't make his presence felt until the game's final four minutes, at which point he proceeded to toss out about five "bending, bending"s in the span of 90 seconds.

I seriously wondered if Valvano let him know he had a reputation to uphold during the last tv timeout. 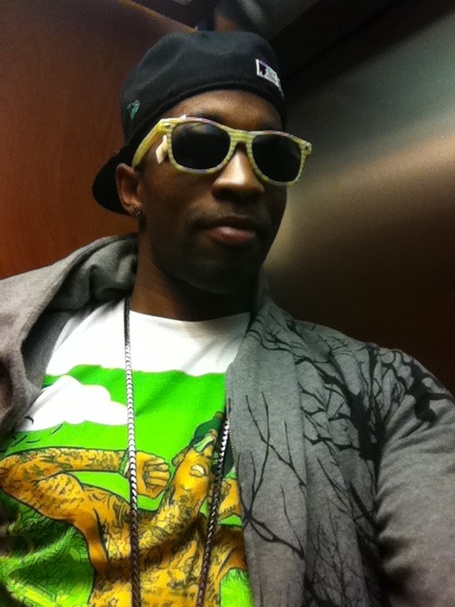 He saw me about 20 minutes later wearing the exact same thing. It was hilarious. I ended up changing. Went jeans, sweater, hat.

I'm told that Pitino said during his postgame interview that "we will win that game" in reference to Wednesday night's tilt at Notre Dame, where Louisville hasn't won since joining the Big East. I know he was pretty fired up about it during his postgame press conference too, and I loved it.

We have taken two absolute shellackings up there, including that 33-point beatdown in '09 which ended up being one of only two league losses the eventual Big East regular season and tournament champs would suffer. And that Fighting Irish team didn't even make the tournament.

The Joyce is an awfully tough place to play (for some reason...I still have no idea why), but I like that we're trying to head up there with a little confidence for a change.

A shot at a second road win over a top-ten opponent should make for a great evening.

Let's pull out the old checklist (disregard the rankings):

A Win is a Steal

A lot of games left in that last sub-group.