About four months ago I distinctly remember hopping in my car on an otherwise forgettable late October day, turning the key and instantly being greeted with: "Let's be clear about one thing: Louisville is going to be awful. It's not even up for debate. They're going to be terrible, and the fans are going to call for Rick Pitino's head."

I thought it was a bit over-the-top, but I'd be lying if I said I disagreed wholeheartedly.

A week or so later the Big East coaches came out with their annual preseason power poll and predicted that Louisville would finish tied for 8th in the conference.

Now there is only March basketball left to play, and the Louisville Cardinals are tied for third-place in the Big East and find themselves knocking on the door of a top-ten national ranking.

I did not think this team would make the NCAA Tournament.

As Pitino himself put it earlier this week: There's no rational explanation for how this squad has put itself in this position. Look at the roster, look at the statistics, hell, watch the individual players in action; it simply does not add up to a record of 22-7, 11-5.

This has been a far more enjoyable ride than anyone involved could have foreseen, but the reality is that, fair or not, a team's lasting legacy is almost always cemented by what it does in the postseason.

Part of me thinks the cheerleader technical is hilarious, part of me feels genuinely sorry for the guy, but more than anything I'm mad that it's taking so much attention away from the fact that Louisville just defeated the No. 4 team in the country.

Here's the team's reaction after being told by Pitino what happened:

As if male cheerleaders don't have a bad enough rep as is.

Also, that guy could definitely have been the son of Darryl "The Heavy Hitter" Isaacs.

Louisville now needs to win just one of its final two regular season games to earn one of the league's four double-byes in the Big East Tournament. Win both and the Cards can finish no worse than third.

All year long fans and critics alike have talked about the dangers of "living and dying by the three" and wondered aloud "what happens on a night when U of L doesn't shoot well?" Well, the Cards went 8-of-30 from beyond the arc, couldn't buy a bucket in the final six minutes of regulation, and would up beating what appears to be a No. 1 seed.

Missing shots is not a trend I'd like to see continue, but I think it's a big confidence boost for Louisville to win a game like this against a quality opponent at this point in the season.

Starting in about ten days, how you win no longer matters.

It was far from his best shooting afternoon, but I thought this was one of Kyle Kuric's two or three best performances of the season. The man was all over the place and his athleticism was on complete display. Kuric led the team in rebounding, got his hands on a number of loose balls, and then of course had the two big buckets in overtime.

The most encouraging thing about Kuric's development over the past month or so is that he's losing the tentativeness that had plagued his college career for long stretches up until now. It used to be that if Kyle missed two shots in a row at any point in the game, he was pretty much done for the night. He wasn't going to do much dribbling, he wasn't going to do anything particularly special to create shots for others, and he sure as hell wasn't going to take any more shots. That's no longer the case, which is huge, because all things considered I think he's our best shooter. We are no longer capable of winning on nights when Kuric is a non-factor.

See the king, he stay the king. 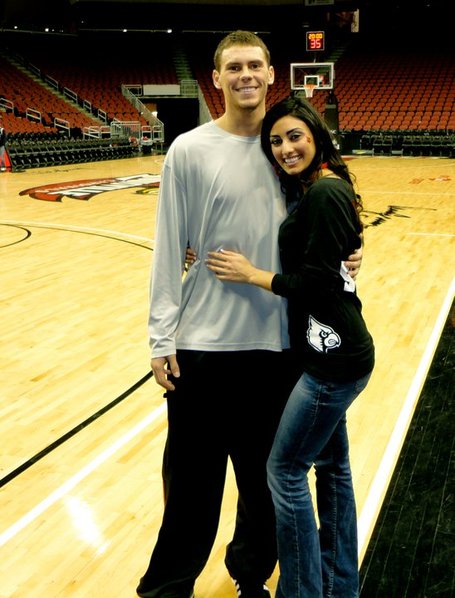 Pitt's Ashton Gibbs, who finished the day 3-of-11 from the field, took to Twitter after the game to let the world know that he wasn't particularly impressed with Louisville.

no way we shouldve lost to them bums smh

If he would've said "smdh," then it would've been on.

Brad Wanamaker finished the afternoon with 13 points, 12 rebounds, 6 assists, 3 steals, and 2 blocks. There was a stretch late in the second half where he was practically willing Pitt to victory. I don't think his game-tying shot near the end of regulation was even half-way to the basket when I said, "That's OK, let's make sure we take the last shot."

Can't say I'm not happy that guy's a senior.

The official word on Rakeem Buckes is a sprained right knee that will keep him out for a week. Tough break for a guy who's spent far too much of the season dying to be healthy.

Pitino had serious praise for Mike Marra after the game, saying he was the most cerebral defender on the team and that he communicates the most when the other team has the ball.

When I said earlier in the year that Marra was playing well defensively, Pitino said the exact opposite. I was happy he hit some shots today but thought he was pretty bad on defense, and then Pitino comes out with this.

Regardless, I think we both agree that he catches more flack than he deserves. 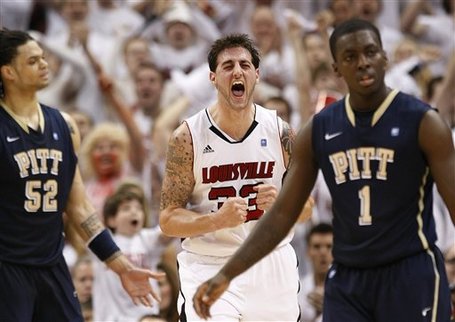 His three towards the end of the first half could not have been more of a momentum-killer for Pitt.

Though he opened both the game and the second half with some pretty horrendous play, I thought Peyton Siva again performed admirably, despite having four turnovers to go with just three assists. He appears to be making a concerted effort to get his legs into his free-throws more, and he buried all six of his attempts today. If that's a trend that catches on it will be an enormous, enormous development for us down the stretch.

Another off-shooting night for Preston, but he finished with a team-high seven assists and hit a shot in the game's final minute when no one else appeared to be playing with any confidence on offense.

I don't even want to think about Wednesday night right now.

Is there a team in the history of college basketball that's been involved with technicals as bizarre as the ones we've seen in the past three weeks? First, you have one of the most mild-mannered kids to ever play at Louisville get a "taunting" technical for briefly looking at a kid following an incredible dunk. Then, it's Preston encouraging a cheer from the student section. And then there's today's debacle.

Charlie Strong officially loves Louisville basketball as much as we do. How awesome is that?

Equally awesome was Clint Hurtt's crazy fist-pumps and cheers from behind the bench at today's game. When he was asked during halftime why he elected to spurn Auburn and stay at U of L, his response was: "this is where my heart is."

My dad's cool and all, but I would not be opposed to this man adopting me. 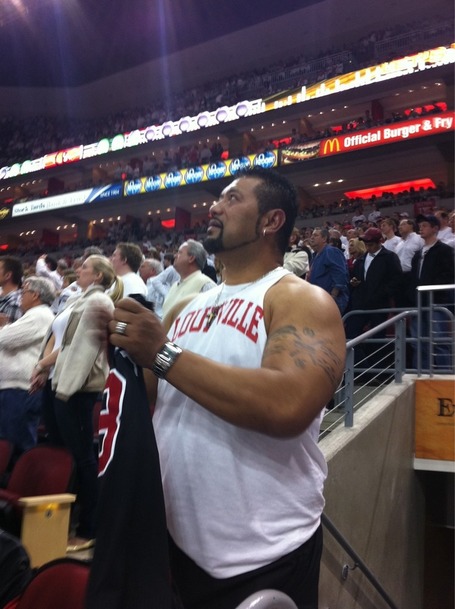 Pitt switched to a zone out of a timeout early in the second half, and without hesitating we went into that same offense we used against Syracuse and got an open look for Chris Smith. He didn't knock it down, but this is a team that used to panic in these same situations 6-8 weeks ago.

Loved Gorgui's rainbow soccer move heading into the locker room at halftime. The dunks and the six rebounds in just 16 minutes were OK, too.

That's a big win for us.

I don't want to read too much into it, but I think there's something wrong with Preston's left knee. He was wearing a brace on it for the first time that I've noticed, and the announcers commented that it looked like he came down gingerly on it after going up for a rebound early in the second half. It obviously didn't affect him too much, but he did seem to be moving just a touch tentatively when heading to the bench during timeouts.

At this point it's going to take a Burt Reynolds in Deliverance injury to keep the man off the floor.

Really like Jamie Dixon (saves people in car accidents, gets TCU into the Big East), but someone get the man a bottle of water. 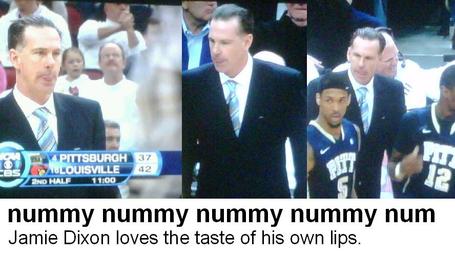 Pitt made every play it had to down the stretch in regulation, while Louisville had shot after shot roll tantalizingly around the rim during the same span. Common thought says the soon-to-be Big East champions handle business in overtime and head back to the Steel City with a victory. But again, this Cardinal team consistently makes people look foolish for coming to premature, albeit rational, conclusions.

Perhaps having learned from their experience in South Bend three weeks prior, Louisville did not rattle. They got a big three from Kyle Kuric, allowed Pitt to attempt just one shot in the first four minutes of overtime, and walked away with their second win over a top five opponent.

This is part of the reason why I truly think that anything is possible for this team in March. The talent isn't there like it's been in past years, but the focus, chemistry, and heart are all present in heavier doses than they've been before. Louisville is not going to be distracted by the environment in New York, and it's not going to be intimidated by the bright lights and the pressure of the NCAA Tournament. They're not going to be out-worked by a team that wants to advance more than they do, and they're not going to fold when a more talented team punches them in a face with an early barrage of unstoppable offense.

March 2011 looks like it's going to be far more fun than even the most optimistic of us could have predicted a few months ago.