In a season drenched with pretty positive vibes, I'm not sure there's been a better overall day than Friday.

The only major sporting event on TV, easily the best environment in the brief history of the Yum, and then one of the two or three top start-to-finish performances of the season by the beloved home team. It was exactly the type of evening you dream about having at this point in the season.

There's no question this was the best defensive performance Louisville has given this season.

I had the pleasure of sitting next to Sohl (thanks to tickets provided by wscii) and I told him at halftime that we had only had two bad defensive trips, one where we went underneath a screen and Shabazz Napier got a clean look at a three, and a second where we simply lost Jamal Coombs-McDaniel underneath the basket.

When it takes you two sentences to name - off the top of your head - the entire collection of defensive mistakes your team made in a game's first 20 minutes, it probably means that team is playing some hellacious defense.

Sohl wore his Card Chronicle shirt and did the Preston Dance as the clock was about to hit zero. People were impressed. Confused, but impressed. You'd know the expression if you saw it.

I made the last-second decision not to drop Ms. CC off at Freedom Hall and did end up taking her to the game. No one threw anything...accurately.

She wore her new "What's Goode?" shirt (I do Valentines Day big), and a friend put a pic of it on Twitter which George himself said he "loved."

"They had 10 eyes on me," Walker said of the Cards. "They made sure there were 10 eyes on me. Wherever I was - I was on the sideline and Coach Pitino was like 'Stay here,' just to make sure. He was telling his guys, 'Stay right here.' It was just, don't let me get going. So that's it."

Everyone knew where Kemba was on the floor, especially once the game got tight, and watching Louisville do what they did to him on the defensive end was nothing short of marvelous. Pitino said after the game that they didn't want to shut Walker down and have someone else go off, so I guess the compromise was just shutting everyone down.

Walker finished 3-of-10 from the field, one of those three being a banked-in three-pointer. The night brought his two-game total against Louisville to 36 points on 10-of-33 shooting.

Even Rick Pitino's harshest critic should have been giving the man his due praise over the weekend.

Louisville and Connecticut played about as tight a college basketball game as you can play three weeks ago. Jim Calhoun had the exact same tape of that game as Pitino did, and the same exact amount of time between that one and Friday night's tilt.

Louisville shut down one of the nation's best players, shut down the two other guys who had given them fits in January, and never appeared frustrated or rattled by anything the Huskies threw at them on the defensive end of the floor.

A couple of people let me know after the game that Pitino, his wife, Ralph Willard and a few other members of the staff were out celebrating and watching the replay of the game at Molly Malone's in St. Matthews. I reckon the man was celebrating more than just an emphatic sweep of the No. 12 team in the country.

Jeff Goodman can't believe Louisville fans are excited that, in just his second game back, Gorgui Dieng went for 13 and 11 against Connecticut. I mean, it's Gorgui Dieng.

In the past several years, I'm not sure I've seen a Cardinal big man make as impressive an offensive play as Dieng did when he caught Preston's bullet pass and finished the driving lay-up in the second half. The slow-mo replay they showed on the jumbotron really conveyed how astounding the play was. He's sprinting down the lane when he pretty much catches the ball with one hand, gets bumped in the air, switches the ball from his right to his left hand as a result, and then finishes the play like it's easier than learning a language.

His attitude, his skill set, and the fact that he's still in the early stages of learning the game make for a special combination.

After what happened against Cincinnati, it shouldn't have surprised anyone that Connecticut came out and immediately focused on taking away the three point shot. Terrence Jennings responded by scoring eight of U of L's first ten points, forcing Calhoun to adjust early.

He was relegated to the bench later, first because of foul trouble and then because he wasn't rebounding and Dieng was. Here's hoping he responds positively, because a regression after how far he's come in the past three weeks would be really disappointing.

Despite Dieng's performance, I'll be surprised if he usurps TJ in the starting five on Tuesday.

I'm calling it: this was the best student section performance in the history of Louisville basketball. The kids were lively from start to finish and the "royalty" theme was well executed.

Present at the game: 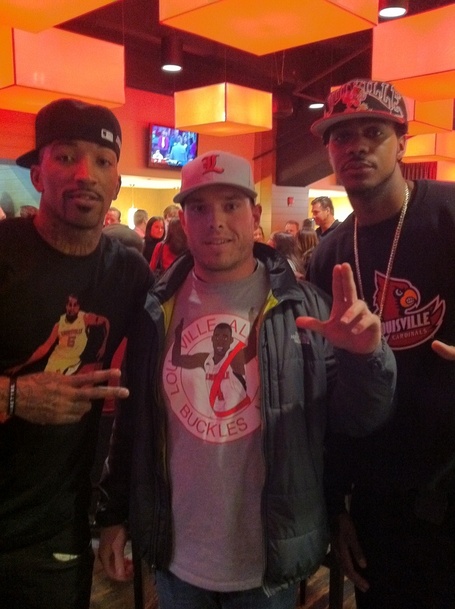 Not present at the game:

Does anyone know who the guy in the top hat leading the team cheer in the tunnel before the game was? We thought it might have been T-Will, but apparently it wasn't.

No one else I've talked to since the game has known either.

If you haven't already, please re-watch the game or the AnVillen video and take special note of Charlie Strong on the end of the second row behind the Louisville bench. In the last four minutes of the game he was literally the most excited person inside the KFC Yum Center.

Jonas Salk would have abandoned his quest to cure polio if he'd had the chance to play football for Charlie Strong.

-7-for-12, 19 points, seven assists, three steals and four back-breaking drives to the basket late in a 79-78 double-overtime victory at Gampel Pavilion.

It's quickly becoming a Kuric/Syracuse situation.

Loved the philosophy of salting the game away by looking to attack and get lay-ups early in a possession, but running clock if the easy two wasn't there. You want to be smart, but sitting on the ball without making any honest attempt to put it in the basket until the shot clock was below eight almost cost Louisville dearly against Syracuse.

Seven assists for Preston, who made up for an awful shooting performance by getting after it on the defensive end and making great decisions with the ball in his hand down the stretch.

Pitino tends to overblow the "leader" stuff every year as sort of a reward for guys who make it to their fourth year in his program, but it really is obvious how much everyone on the team looks to Knowles, especially since we've gotten later into the season.

You can't overstate how big Kyle Kuric's back-to-back three-pointers after Connecticut had taken the lead were. We are absolutely at the point where this team cannot win without at least a solid contribution from him.

I'm told the announcers again struggled with the pronunciation of Gorgui's last name, which led the spotted bass folks to create this shirt possibility: 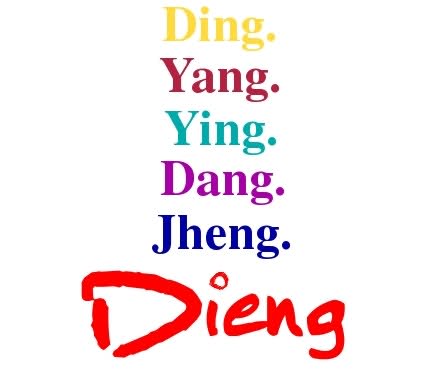 Game facts from U of L:

--Louisville won its fourth straight game over Connecticut, tied with Pitt for the longest active streak by any Husky opponent .

--Louisville (20-7) has now notched at least 20 wins in nine consecutive seasons, a claim only seven other schools in the nation (Kansas, Duke, Syracuse, Florida, Texas, Utah State, and Pittsburgh) can make.

--The 20-win season was the 19th for Louisville head coach Rick Pitino at the Division I level, placing him sixth among active coaches and 15th among all coaches.

--Pitino (592 career victories) moved into a tie for 43rd place on the all-time wins list for Division I coaches, matching the total of Houston’s Guy Lewis (1957-86).

--Louisville and Pittsburgh are the only BIG EAST teams yet to lose back-to-back games this season.

--The Cards improve to 27-6 in their last 33 February games dating back to the 2006-07 season.
The Cardinals notched 12 steals in the game, their 26th game (out of 27) this season with at least six thefts. The one game with fewer than six steals this season (four at Notre Dame) ties for the fewest in the nation.

--U of L forced the Huskies into a season-high 16 turnovers, its highest total since turning the ball over 20 times against St. John’s in last year’s BIG EAST Tournament. This comes one game after UConn recorded a season-low seven turnovers in a 78-70 win over Georgetown. Connecticut became the 20th Louisville opponent this season to have at least two more turnovers than assists (eight).

We already talked a little bit about it here, but it was great to see Chris Smith make some key plays down the stretch, especially with a healthy portion of his family in attendance.

A lot less talking from Shabazz Napier this time around. Really hasn't done much since missing that free-throw at the end of the first overtime in January.

When you try to act like you want to fight the most adorable human being in the world for no reason, these are the kinds of repercussions you're bound to face.

It's amazing how out-of-nowhere Jamal Coombs-McDaniel has come. With Jeremy Lamb not scoring a point in 25 minutes, JCM's solid performance was the only thing keeping UConn from suffering a humiliating blowout.

Even though he got T'd up, Kemba Walker still gets some solid star treatment. Any time he throws his head in the air on a drive to the bucket he gets a whistle.

Big East officials have had a cranky February. Apparently a lot of guys missed the memo on the CC Teddy Bears.

I love this team. 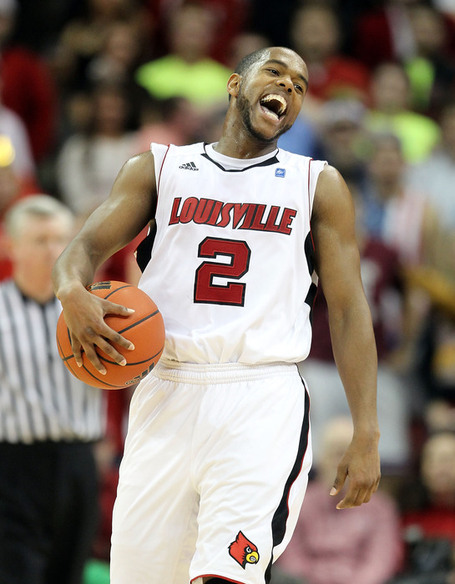