You can check out the whole video on John Clay's blog, but here are the money quotes:

"This league is a strong league. All that stuff about this league, that league, and the other leagues; let me explain it to you: our league is as strong as any of them.

"I'm telling you, there are six teams that are going to be in the NCAA Tournament. And you know what? I'll put what happens in the NCAA Tournament with our league against just about anybody else. Now some of these guys, because of the media hype, might get nine teams in, but the reality of it is that this is a strong league, and every game is a war. Every game we'll play will be a war."

Has Kentucky played a Big East team in March recently? 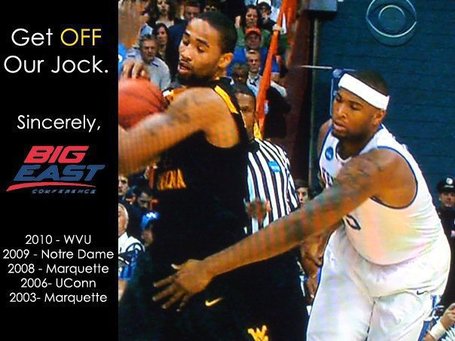