This was a loss that I think a lot of us felt coming, but that doesn't make it any less disappointing.

Cincy was desperate, plays the kind of physical man-to-man that gives us problems, and Yancy Gates and Cash Wright were motivated. It was a bad combination.

Those of us looking for proof that this team is capable of playing beyond the first weekend of the NCAA Tournament (I include myself in that group) found none on Wednesday night.

There are weaknesses that pure effort can't mask, and a lack of quickness/athleticism is one (or two) of those.

With the exception of Peyton Siva, Louisville does not have a guy capable of beating a solid man-to-man defender off the dribble and then making a solid play in the lane. This is why Siva has to be sensational for U of L to beat teams like Cincinnati, Georgetown, and Connecticut. It's not fair to the young man, but it's the way it is.

He wasn't awful on Wednesday night, but he wasn't good enough for Louisville to have a legitimate shot at coming home with a victory.

Kyle Kuric said after the game that defense, not offense, was the issue Wednesday night. While I think offense was at least part of the problem, a big reason for that was U of L not bringing the defensive pressure necessary to generate fast break points.

Louisville struggling in the halfcourt against the best defensive team in the league was to be expected. The Cards recording just six steals (second-lowest total of the season) against Cincinnati was not. No U of L player was credited with more than one theft.

I thought that was the most disappointing aspect of the evening.

To go with their abnormally low steal total, the Cards hit a season-low three three-pointers. After the game, Mick Cronin described taking these two aspects away from Louisville as such:

Cronin, who spent two years as an assistant at Louisville under Rick Pitino, likened the Cardinals' ability to get steals off its press and knock down 3-pointers in a hurry to "Batman with his armor and Superman with his cape." "If you take away who they are, they're just Clark Kent and Bruce Wayne," Cronin said.

Over the past month, nothing good has happened when the woman has tied me down and forced me to watch games with her. Here's her game-by-game recap:

I'll also throw in the fact that we watched the first half of the Marquette game together, and then she had a friend visit and was downstairs for the entire comeback.

We're heading to the game together tomorrow. Only other game we've gone to together this year: Kentucky.

Pretty sure John Gaffney blew at least 35 whistles against us and no more than ten for us. He's not invited to my birthday party.

Chris Smith is having guys play three-feet off of him and he's not even thinking about shooting. We have got to get this guy's confidence back.

The most impressive thing about Yancy Gates' performance was that he was doubled all night and committed zero turnovers. 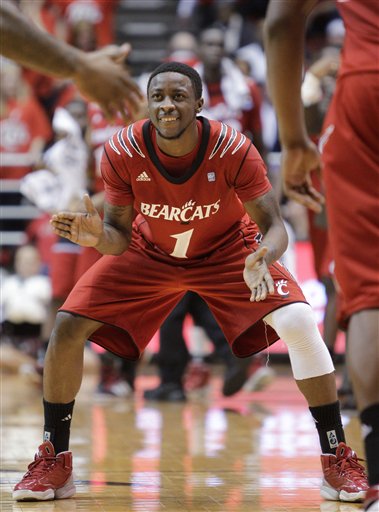 Kyle Kuric is such a thug.

Three claps for Terrence Jennings, who again played at a very high level. I thought he and Kuric - who counter-balanced a relatively poor shooting night by snagging eight rebounds - were the lone bright spots for the visitors.

Listening to Fran Fraschilla was more than a tad frustrating. At one point late in the game he lambasted the officials for not whistling Marra for a foul, and went so far as to say that Cincinnati "deserved" the call because they were an underdog playing hard to get a much-needed victory.

The Bearcats were actually a 1.5-point favorite and had, at the time, attempted 14 more free-throws than Louisville, but facts and Fran have never been great friends.

I have absolutely no idea why ESPN has felt the need to experiment with these awful camera angles in mid-February. I imagine a production meeting where the discussion is something like:

Employee One: "Surely no one would enjoy watching the game from behind the backboard on the end of the floor opposite to where the game is being played. Right?"

Executive: "Well...reckon there's only one way to find out."

At least we were spared the "Mick Mamba."

Six teams in the Big East have either eight wins or five losses, and four (including Louisville and Connecticut) are sitting at exactly 8-5. Suffice it to say, tomorrow night's game is a biggie.