1. I can't decide if games against Syracuse are the new "DePaul Day" or "Rick Pitino in the Sweet 16." Either way, it's good.

2. The '86 uniforms were awesome, and not in an ironic way, in a "we should be wearing these every other game" way.

3. Players (who saw game action) who wore the jersey the best:

1. Preston - Could've been on the '86 team.
2. Bullet - Ditto
3. TJ - Shocked myself, but the man looked comfortable and confident.
4. Rock - Another semi-surprise, but he could've been born in that uni.
5. Kuric - Shorts were too long
6. Marra - Shorts were too high.
7. George - They weren't that big in '86.
8. Peyton - The sleeve and the whole Siva exterior just made it not work for him.
9. Chris Smith - Nothing about Chris Smith screams pre-21st century. 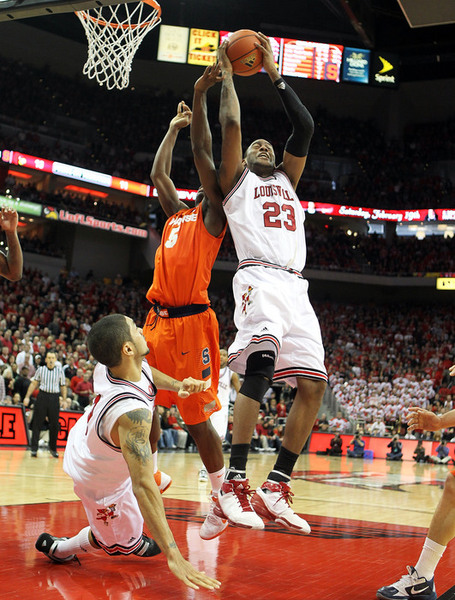 4. This was the first game in a while where I noticed us catching a huge break that I thought completely shifted the momentum.

We were down 26-19 and not looking particularly stellar. Syracuse threw the ball into Keita in the post and Rock doubled. Whoever was on the weak side and supposed to drop down did not do so and the Orange appeared to have a wide-open lay-up. Buckles lunged at the player (Joseph?) in desperation and was able to grab his arm. No foul was called, Boeheim went ballistic, and Louisville was able to draw a fastbreak foul and get two points at the stripe. This started the 21-4 run to end the half.

I'm not saying we don't win if that call is made, but it definitely sparked a mini-swing that snowballed into a much larger swing.

5. The coolest thing about Preston's three right before the half was that probably 85% of the people in the building knew it was going in. That number includes Preston, who started running towards the crowd on the opposite end of the floor about .15 seconds after he let the shot go.

7. On the radio after the game, Pitino was talking about how proud he was of Kyle Kuric's maturation and used the phrase "Kyle's Corner." Of course, this can only mean one thing...Rick Pitino doesn't read Card Chronicle.

8. Terrence Jennings is playing almost right at the level where we were all hoping he would be before the season started.

9. Have to hope that those two clutch free-throws will get Chris Smith going again. Love him and his effort, but someone needs to tell him that between-the-legs dribble isn't taking him anywhere.

10. Another solid A-to-T ratio (3:1) game for Peyton Siva, who doesn't get enough credit for doing things that don't show up in the stat sheet like handling backcourt pressure and making the "hockey pass." Still needs to get some legs into his free-throws.

11. Louisville assisted (verb?) on 17 of its first 21 made shots. The Cards are third in the nation in assists.

12. I think the reason no one was particularly upset after U of L nearly squandered a 20-point second half lead was that it never really felt like the Cards were giving the game away. They weren't making careless turnover after careless turnover or getting beat in transition because of laziness, they just cooled off a bit from the field and a couple of guys from Syracuse got really hot.

The one thing you can be upset about is our guys continuing to go underneath screens when guarding shooters. When Trice and Jardine are knocking down 24-footer after 24-footer, go ahead and force them to go to the bucket and either convert on the move or make someone else try an outside shot. 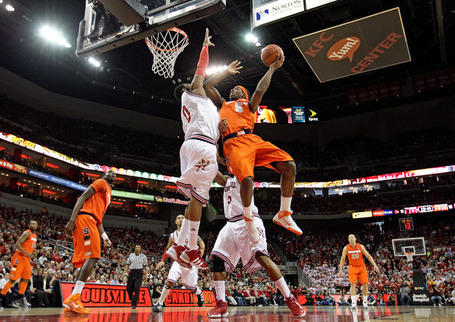 He plays about four minutes a night and somehow there are at least seven pictures of him attempting a dunk, jump shot or blocked shot after every game.

15. It was pretty obvious that Rock hadn't played in a month and-a-half, but it was also obvious why this team needs him to have any shot at making it out of the first weekend of the NCAA Tournament. Buckles is the big, active, athletic guy who can make plays in the lane that this team simply has not had in 2011. He turned the ball over five times and did not make a shot, but both of those things can be attributed to a combination of the time off and being overly-enthusiastic about returning.

The most important thing about Buckles' return: seven rebounds in 14 minutes.

17. Pretty cool that the final score was just one point away from the '86 championship game final. We even almost had an identical clothes line ending. Appreciate the restraint, PK.

18. The Syracuse fans around us were all respectful, but I couldn't help but notice the commotion in the lower level near the beginning of the game. I heard reports of a sign being ripped up and a couple of beers being thrown by the young lady in Orange, but didn't get the full story. I did see the guy throw something into the upper level and then get cuffed. Whatever they did, it was enough to draw the ire of about three entire sections.

19. I was joking earlier in the year when I said that the team had really bought into Pitino's segment blueprint, but that's 4-for-4. Pretty unreal, but this is a pretty unreal group.