Share All sharing options for: Pre-weekend news and notes

The big news of Thursday (I actually wrote out the nickname and then went back and deleted it) was that both Rakeem Buckles and Gorgui Dieng returned to practice. "We’ll see how they do," was Rick Pitino's comment on the situation. I would not be surprised to see either or both play sparingly on Saturday.

The city of Louisville will be the big loser if we don't get to see Gorgui Dieng in a retro uniform.

Pitino's said that Mike Marra has been bothered by a bad back throughout the week, and the sophomore missed practice on Thursday. No word on his availability for the Syracuse game.

The honor was especially sweet for Blackshear, as this year's game is being played in his hometown of Chicago.

"A lot of legends came out Chicago, and I just wanted to be remembered as one of them," said Blackshear. "It means a lot to me for the game being in Chicago. Not a lot of players get to play in their hometown"

Behanan was reportedly surprised by the honor, and expressed his excitement via twitter.

The Kyle Kuric dunk and succeeding technical dominated much of the sports talk in the city on the day after the game. Eric Crawford chimed in with his thoughts on the call and the game.

1). It wasn’t a wrong call, but it was a bad call. Within the rules, the official had every right to T Kuric up. Even if only briefly and fairly mildly, he stood over a fallen opponent for the purpose of taunting. I have no issue with that and am not surprised the Big East would offer no further comment on it, because the rule is the rule. The reason, however, that it was a bad call is that it hasn’t been called all season. And it hasn’t been called in more egregious instances. I haven’t seen a game this year when somebody hasn’t done something worse in the area of taunting or sportsmanship that wasn’t called. Yet Kuric gets hit with one. Part of it was the situation. Everybody in the gym was looking at him. And part of it, I’m sure, is that he doesn’t have that reputation. He’s a mild-mannered kid, so I think it stood out more. There are other players around the country who do that kind of thing regularly who never get called for it. Bad call. But these things happen.

For its part, the Big East came out and said...that it had nothing to say on the matter.

Big East spokesman Chuck Sullivan said Thursday that the conference would have no comment on the technical foul Kyle Kuric received after a one-handed dunk in the final second of the first half against Notre Dame Wednesday night. Sullivan said only that technical fouls are judgment calls by the officials and pointed a reporter to the 2011 NCAA rule book — Rule 10, Section 5, article 1b.

Kuric said after the game that he didn’t say anything to Notre Dame’s Scott Martin but he did stand over him for a brief moment. According to the rulebook, reducing taunting is a "point of emphasis" for this season.

So you're not allowed to stare an opposing player in the eyes. Well, at least now we have a valid explanation for why defense is such a "lost art."

Here's a new shot of the cram: 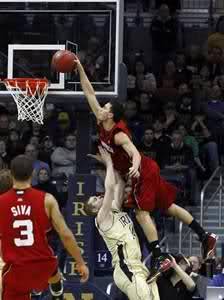 You can get the whole series of The Wire for ridiculously cheap right now. I'll talk to you in three weeks and you'll finally understand at least 33% more of what I'm saying.

Really, really cool news from CBS and Turner today as it was announced that every game of the NCAA Tournament will be carried live on either CBS, TNT, TBS or TruTV. No more cutaways, no more in-game breaks, no more praying the Cards play a team from your market if you live out-of-state, just pure awesomeness.

The games are also going to be spaced out more so that there will be no breaks at all during the first four days of the tournament. That's right, non-stop college basketball from noon to midnight (yep, Sunday night games now, too) for four days straight.

Check out the full schedule here.

I haven't been this excited about something in a while. Sad? Yes. Depressing? Yes. Inspiring? No.

I don't know how big this kid is, I don't know if he can actually play against teams outside the 15th region, but if a fierce in-state recruiting battle doesn't develop over Hobo McCoy...well, disappointed isn't even the word.

If we could somehow convince this kid to walk-on here, I will literally chant "Hobo, Hobo, Hobo" at every game I attend for the next four years. First half, overtime, before the game? Whatever. I want Hobo in there right now and I want him pulling from midcourt.

In case you missed it, St. John's thrashed Connecticut at The Garden by 17.

Here are your updated league standings:

We're six points away from being a half game up on Rutgers, Seton Hall, and Providence for 12th place.

Perhaps the biggest story in the college hoops world Thursday night was Tim Higgins' horrendous blown call at the end of the Vanderbilt/Alabama game where he whistled 'Bama's JaMychal Green for stepping out-of-bounds with six seconds left and the Tide down a bucket. 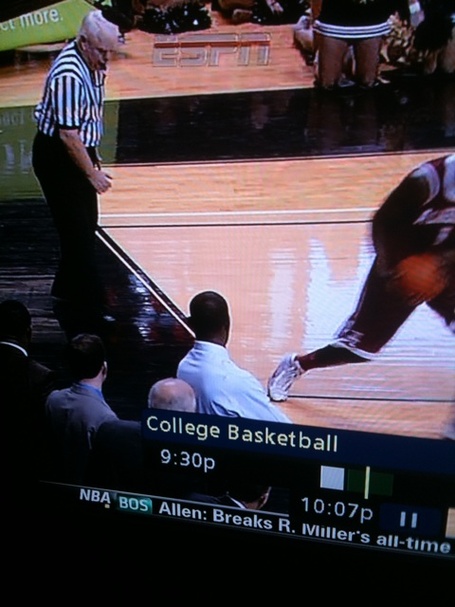 Come on. You can't expect him to make a 100% accurate call from that distance.

College basketball simply has got to do something about this kind of officiating. I don't know if they need an age limit or some sort of fitness test, but this sort of thing has been happening far too often this season and in recent years. It doesn't help that these guys are all working four, five, sometimes six straight days at a time.

Lastly, I edited some video of young HotHot that his mom sent in. Note the umbros and enjoy.

Did anyone not have at least one friend with that exact basement in 1992?