You can almost always accurately qualify the austerity of a loss by the time the morning after rolls around.

This one still stings.

Common thought says this shouldn't be as bad as it's been this year. Louisville lost to Drexel at home, handed Providence their first league win of the year, was drubbed by arch-rival Kentucky on New Year's Eve, and squandered opportunity after opportunity in a Big Monday loss at Georgetown last week.

This Notre Dame team is ranked 7th in the country and hasn't lost at home all year. Not that the latter fact is particularly unusual, the Fighting Irish rarely taste defeat at the Joyce Center, even in down years. Louisville knows this first-hand. The Cardinals have tasted crushing defeat twice in South Bend, including a 33-point drubbing in 2009 when they went on to win both the Big East regular season and tournament championship.

And yet half a day after the fact it still feels wrong to see a black "L" next to the game on the calendar. A few questionable calls, a pair of poorly executed last-minute possessions, a defeated overtime effort, and infuriatingly-biased announcing made the entire Wednesday night experience a painfully insuppressible memory.

We'll start with what this game will inevitably be remembered for: the Kyle Kuric dunk/technical.

Rick Bozich has a solid column on the issue this morning, which includes the following:

Kuric lingered for a second, no more, over Martin's sagging body.

A whistle interrupted the Cards' celebration. Technical foul on Kuric. For taunting.

If you were making a list of 100 players in college basketball most likely to taunt somebody, Kuric's name would show up 1,000th on that list. He said he's earned two technical fouls in his entire career — both in elementary school.

It was a ridiculous whistle.

"I did not say anything," he said. "The ref said I looked down and taunted the guy after it, and that's why he gave me the ‘T.' I looked down at him for a second."

A Kentucky fan sent me a twitter message during the game saying that if what Kuric did warranted a technical then Terrence Jones deserved at least one a night. He's right, and honestly we've seen Chris Smith, Preston Knowles and I'm sure a couple other guys stare or even shout (UNLV game) at the opposition following a particularly impressive or momentous made shot. To T Kuric up for what he did is very simply indefensible.

What makes it even worse is that the baseline official who was literally a foot away from Kuric when "it" happened didn't blow the whistle, it was Pat Driscoll who came flying in from somewhere between midcourt and the three-point line. Driscoll reportedly originally told Pitino that Kuric had some something to Scott Martin after the play, a claim the Cardinal head coach found hard to believe.

"First of all, he's a mime, Pitino said. "At first the ref said Kyle said something, but (Kyle) hasn't said anything in three years. He's a complete mime. He's the nicest young man on the team."

After halftime Dricscoll explained to the ESPN commentators (who we'll get to later) that the technical was because Kuric "stood over Martin," something the official deemed to be "taunting."

It's easy to say, "well that play gave them two points and the game went to overtime, so that call cost us that game," but that's not entirely fair. You can't ever, in good conscience, go quite that far because the score being 44-38 at halftime guarantees that the second 20 minutes would not have played out in exactly the fashion it did Wednesday night.

Still, it would have been cool if they hadn't been gifted those two points.

Despite the resulting controversy...

Bob Knight was nearly as bad as Phelps (the Jason Lezak of horrific commentating), but I'd prefer not to spend another two minutes writing about the announcing.

I'll just say that a man who is known every bit as much for his on-court intimidation antics as his coaching success calling a one-second glance "idiotic" is more than a touch ironic.

Pitino said after the game that Wednesday night was the first time his team had tried out its newly-installed halfcourt motion offense. It worked tremendously in the first half as the Cards scored 44 points on 17 assists. That assist total dwindled to five in the second half, a stat which Pitino blamed on selfishness.

I think the fact that these guys showed they can run this new offensive effectively (for a half, at least) is very encouraging as far as the rest of the season is concerned. To have any notable success this month and nest, U of L has to be able to score in halfcourt situations, which has been a struggle all year long.

The Kuric call is the easiest to bash today, but it probably wasn't as crucial as the awful call on Terrence Jennings with 1:02 left in regulation. Tyrone Nash was backing TJ in, literally tripped over his own two feet, and was promptly rewarded with a trip to the free-throw line for a 1-and-1. He buried both shots, ultimately leading to the game heading to overtime.

Notre Dame and Seton Hall remain the only two Big East road wins Louisville has yet to capture since joining the conference in 2005-2006.

Mike Brey's decision to switch from man to zone halfway through the last possession of regulation deserves the praise it's receiving this morning.

My guess is that Pitino had a play drawn up in the likely event that the Fighting Irish came out in zone with 25 seconds left, but when Peyton Siva got the ball and saw Ben Hansbrough coming out to check him all by his lonesome, you know the sophomore started having UConn flashbacks immediately. Notre Dame fell back into the 2-3 at the perfect time. Ten seconds wasn't enough time for Siva (or the other four Cardinals on the floor) to first, recognize what was going on and second, get into the play that was drawn up during the timeout. The result was three defenders greeting a penetrating Siva and Preston Knowles clanking a very deep three as time expired. 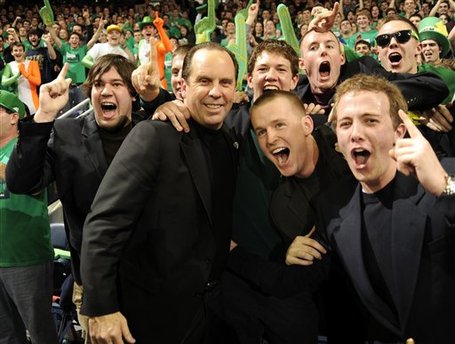 CardsFan922 is working on getting him to do a guest-post before the end of the season.

Chris Smith had another rough end of the game. In a sequence eerily reminiscent to what happened late in the eventual loss to Georgetown, CS5 had a wide-open look from three with about two minutes to play and us up by two. He missed and Nash hit the game-tying free-throws a couple of possessions later.

A couple of people brought it up in the game thread, but fatigue may be getting to Smith at the end of games. Outside of the elbow he took from Jennings on DePaul Day, he's really the only full-time starter who's gone unscathed through this injury-riddled stretch of time.

Tim Abromaitis grabs, hooks, and shuffles a lot and doesn't get called for much of it. His game really hurt us for the second year in a row.

What hurts the most about this loss is that there's so much distance between the emotions that would have been born from a win and the ones we're dealing with now.

If Louisville beats Notre Dame last night then the Cards have just pulled off the most improbable victory of the season and are alone in second place in the Big East at a moment when they're right on the verge of being healthy for the first time in months. That's a pantsless situation.

As it is, we're now in a position where if we lose to Syracuse on Saturday it's cause for a mini-panic. There are no guarantees left on the schedule (Rutgers beat 'Nova at the RAC last night and we've already lost to Providence once) and there are multiple teams still on the slate that have little numbers next to their names.

Look at the standings:

Two games separate No. 2 from No. 11. There are nine teams that could very easily finish as high as second, as low as 11th, and anywhere else in between.

There isn't an inconsequential league game left for anyone at this point.

Another big night for TJ, but you could tell he was gassed there at the end. I think Jennings has to be the horse we ride into March, but that doesn't mean we don't need Gorgui back desperately.

Not Preston's best effort. He hit a couple huge threes when things were starting to get away from us in the second half, but he's also one of the main reasons our assist total dropped so dramatically from the first 20 minutes to the second. This was also the worst defensive game he's played all year. I'm not sure if he's a touch out of shape after missing time with that hamstring injury, but that can't stand, my man. Not at this juncture.

Elisha Justice played far more aggressively during his short spell on the floor, which was encouraging,

Somehow the Mike Marra banked-in three when we were down 14 in overtime made things worse.

Ben Hansbrough scored 25, but it didn't feel like he killed us. I think the whole "make him go left" philosophy was a tad overblown as he did it effectively a couple of times Wednesday night. He's a very, very good player and if he keeps this up and the Irish finish one or two in the league, he should probably be Big East Player of the Year.

I could not be more excited for retro Tim Henderson on Saturday.