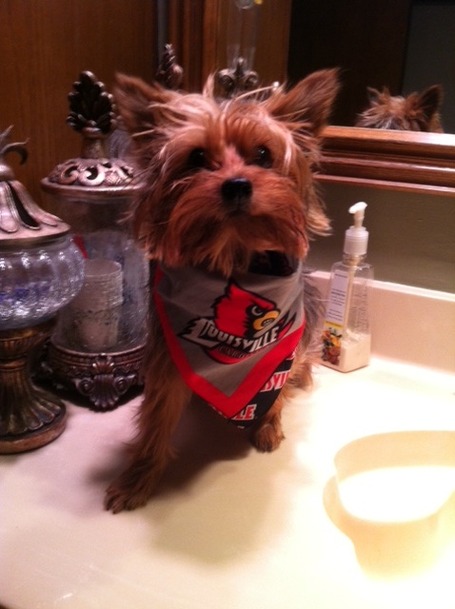 Prissy the Yorkie is all dolled up for an upscale, Cards-themed Christmas party tonight. She's got the scarf working and the pose down.

SI's Luke Winn is back with more power rankings, and this week the Cards are up one spot to No. 9.

The Cardinals' defense is so stout that they've managed to remain undefeated (and in the top 10 of the Power Rankings!) despite the fact they routinely struggle to score. As Courier-Journal columnist Rick Bozich wrote of the nation's No. 68 team in adjusted offensive efficiency, "This season [Rick] Pitino is dealing with an issue that rarely has been a problem for his teams: U of L hasn't looked like a team primed to make the scoreboard tilt. Points have been a problem."

From an advanced-stats standpoint, look how far the Cards lag behind fellow, ranked Big East teams in spot-up and post-up efficiency, according to Synergy Sports Technology:

The Cards have been abysmal in the post, despite taking shots from there with more than double the frequency of Pitt or Syracuse. It'll be worth monitoring whether efficiency improves once 6-foot-8 forward Rakeem Buckles, who just returned from an ACL injury, is integrated into the rotation.

When you're covering a sport without a meaningful postseason, you can do things like offer up an early top 25 for next season before this season's postseason has even begun. That's exactly what Athlon did with its very early top 25 for 2012, a list that includes Louisville at No. 23.

23. Louisville – The Cardinals came up just short of winning the outright Big East title this season. However, the future looks very bright. Louisville had a plethora of young players see time this season, including true freshman quarterback Teddy Bridgewater. The offensive line struggled this year, but should be better in 2012 with a full season from center Mario Benavides. With West Virginia off to the Big 12, the Cardinals should be the favorite to win the Big East.

A new company called Deuce Brand has started producing the following U of L watches: 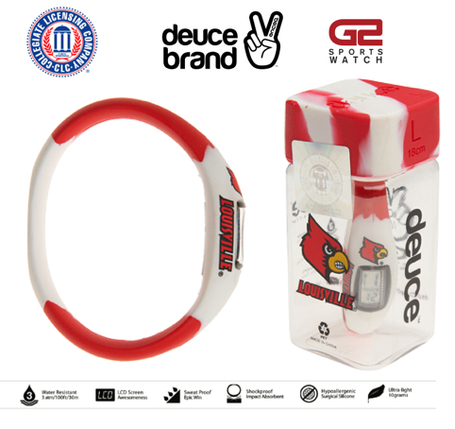 For more info, you can check out the Deuce Brand website.

Paul Petrino is headed back to Arkansas and Jeff Brohm will run the Illinois offense in the Kraft Fight Hunger Bowl. Best of luck to both.

Understand I received a shoutout on The League last night. Just wish it had been from anyone other than Taco.


Offensive MVP: Bridgewater. Bridgewater came on in relief of Will Stein against Kentucky and led the Cardinals to a win over their in-state rivals. He never relinquished the starting job, and set a school record for passing yards by a freshman with 1,855.

Defensive MVP: Dexter Heyman, LB. Heyman led the team with 83 tackles and also ranked No. 3 in the Big East with 15.5 tackles for loss. He was consistent all season and the big-time leader of a very young group. He also was one of the few who were able to stay healthy for the entire season.

Turning Point: A 16-14 win over Rutgers. The season hung in the balance heading into this game, as the Cardinals had dropped three straight, including their Big East opener to rival Cincinnati. After watching cornerback Anthony Conner go down with a broken neck, Louisville played with an added sense of urgency and that carried over for the rest of the season. This win launched the comeback and helped the Cardinals close with wins in five of their final six games.

Scout.com released its latest class rankings for 2012, and of particular note is Houston strolling in at No. 19. This comes on the Heels of ESPN ranking the class - headlined by top 100 players Danuel House and Danrad "Chicken" Knowles - No. 12 and dubbing it the best non-BCS class in the country.
Now my intelligence tells me that House would have ended up committing wherever Chicken did, and we all know what would have happened had Chicken been offered a scholarship by U of L. So basically, Card Chronicle landed a top 20 recruiting class all on its own.
Update your resumes accordingly.

At some point on Tuesday, CC eclipsed the 10 million page view mark. What's remarkable about that is well over half of those hits have come over the past 12 months.
You people... 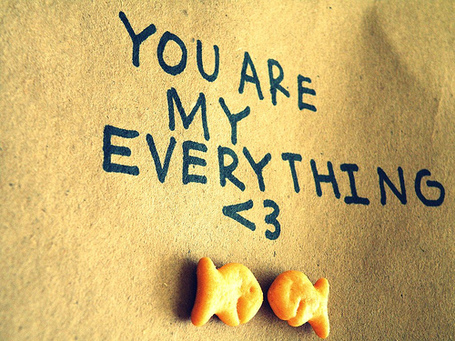 Check out this tweet from class of 2013 QB commit (and budding Twitter star) Kyle Bolin from Lexington Catholic:

Congrats to Jerry Smith, who has been signed to the New Jersey Nets' training camp roster.

It's been a big week for Louisville sports icons and babies. The following pic was tweeted to me on Tuesday night from the Butler/Bullitt East game: 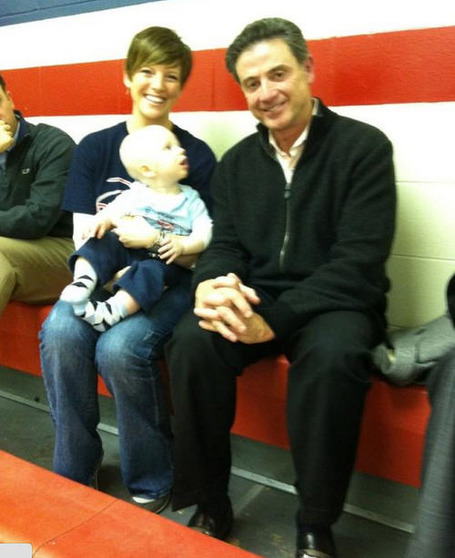 Speaking of that game, here's a better video of the much-discussed Pitino/Calipari interaction from HSreplays.

Least Cool Person of 2010-2011 Brandon Bender is at it again, serving as the "mentor" for Arizona recruit Ray Kasongo. Might be a red flag, Sean Miller.

A nice piece from Newsday on how injured Cardinal CB Anthony Conner helped turn the season around.

And finally, I'm not sure there's ever been this much man in one photograph: 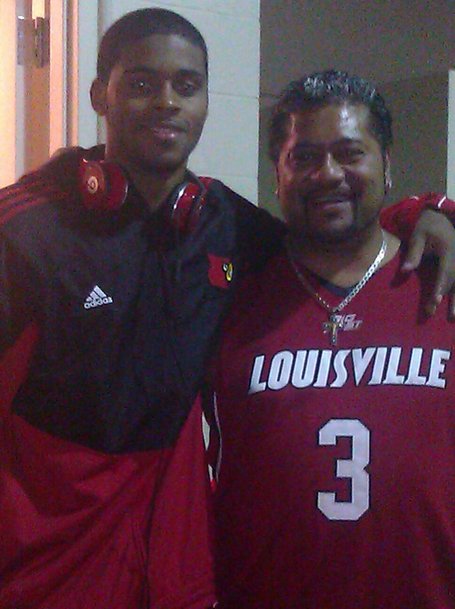