All accounts have Rick Pitino absolutely berating his guys at halftime, and he had every reason to. I'm not sure the opening 20 minutes last night against IUPUI was the worst half of the season, but it was definitely the most disappointing.

Before every game, Pitino speaks on the big screen about playing for the moment and giving an extraordinary effort each and every time you step on the floor. The message was not received early on Wednesday night. The Cards came out with zero energy and played as if all they had to do was go through the motions in order to secure a 20-point win. There was one point where Gorgui Dieng scored and was fouled to break a 23-23 tie, and nobody on the floor celebrated.

It's been nice to avoid the ridiculous upset so far this season, but maybe it's also left these guys thinking they're much better than they actually are. There's too much experience on this team for U of L to ever need a halftime ass-chewing in order to wake up. Any notable success Louisville achieves this season will be due in large part to superior effort. If the Cards don't outwork opponents, then simply put this season won't end up being anything special.

All that said, the second half was a much different story and the team should be applauded for that. It just shouldn't have taken an hour for it to happen.

Congratulations to Chris Smith, who passed the 1,000-point mark for his career with last night's team-leading 19-point effort. Louisville doesn't get credit for Smith as a 1,000-point scorer since he spent his first two seasons at Manhattan, but it's still a tremendous individual achievement.

I continue to be amazed by CS5's ability to finish around the rim with either hand. On the break or with a step on his man, Smith's good for an almost automatic two points.

I'm not sure why anyone ever plays zone against us. If you have a defender who can stay in front of Peyton, we can't accomplish anything in the halfcourt right now.

Guy sitting next to me totally called the Chris Smith three to break the 31-minute drought from beyond the arc. He then got way too excited and elbowed me pretty hard. It's cool. We're friends.

I have it in my head that Louisville has something like the second-longest streak of consecutive games with a made three-pointer, but that could be the entire Mr. Goodbar I just ate talking.

"CHRIS from RUSS" is my new favorite thing.

When Pitino was asked a question about Russ Smith in the postgame press conference, he angrily replied "next question."

I don't understand the increased frustration since Russ really didn't play any differently last night than he has all season. By my count, he only took one shot that was unquestionably egregious. It was in the first half when he pulled up off a screen and Rock was wide open underneath the goal.

If anything, I thought Russ changed the game for the better in the first half. He's frustrating, there's no question about it, but I didn't see him do anything that should have led to him being at the center of Pitino's ire.

When Beach Gorgui is serving as talisman, basketball playing Gorgui does not miss shots. This is simply a fact.

Was one of a few folks sporting this at the Bucket last night: 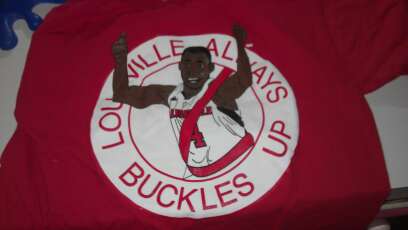 Caught Darrell Griffith in the building before the game. Totally tried to snap a walk-by pic with him Say Anything style but it didn't work out.

We did a tremendous overall job on IUPUI star Alex Young, who scored just nine points before fouling out of the game. That’s only the fourth time in the past two seasons Young has been held to single-digits.

I will almost guarantee that Angel Nunez's performance in the final two minutes last night will earn him random meaningful floor time in one of our big games before the new year. I'm telling you. Watch when we're down seven or something to Georgetown in the first half and Angel comes flying off the bench. It's going to happen.

In all seriousness, I understand why the coaching staff is bringing him along so slowly, but I also feel like you could throw him into the fire right now, tell him to "look for his shot," and the casual fan would never know that this was a guy who was almost redshirted. I believe Pitino when he says Angel is going to be better than good in a couple of years.

Attention person who edits the pregame video (and I know you're reading this): I've noticed the elimination of the extreme Marra close-up, and I'm not thrilled about it. The only reason I'm not calling for your head right now is because I love the dancing Hendo cut-out shot at the very beginning.

Remember earlier when we were talking about the definition of irony? 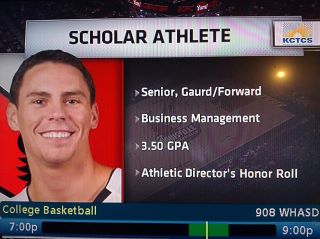 There are a lot of people saying today that folks need to stop worrying about Peyton Siva's jump-shot and start praising the fact that he just handed out seven assists and had just one turnover. That's fine against IUPUI, but the fact is there's just no way this team is a legitimate national title contender without Siva serving as at least a moderate threat to score from the outside. I'd really like to see him take four or five outside shots on Saturday to try and get his confidence headed back in the right direction, because right now he is not even close from 15 feet and out.

Do love the new free-throw stroke though. Also love that his dad points to the sky after every make just like Peyton.

Speaking of Peyton Siva Sr., had a reader email me this morning to say that his sister was on the same flight with the man, and that he was in full-on Peyton Siva Sr. attire. 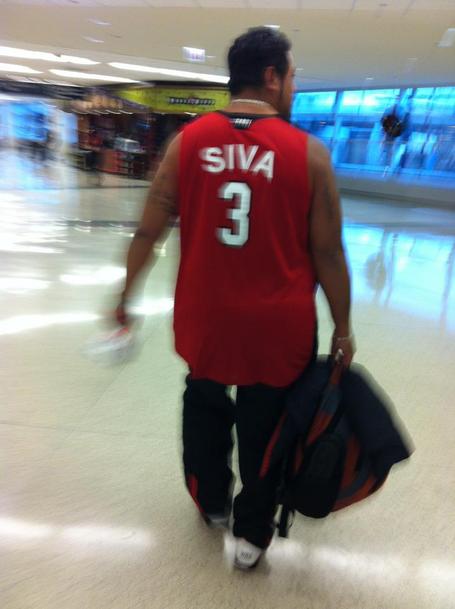 It's funny, because I had a friend last year who was on a flight with him the morning after a game and said that he was sporting the jersey then as well. Love that man.

All of the players in street clothes were wearing the same U of L basketball track suit. Do I think this is because Pitino found out I was publicly critiquing clothing selections? Not a doubt in my mind. Crazy cold, Rick.

Stephan Van Treese didn't arrive from out of the tunnel until a few minutes into the game, and Slacks Mike Track Suit Mike never appeared on the bench at all. Bullet was back on the sidelines, however. Face looked good. 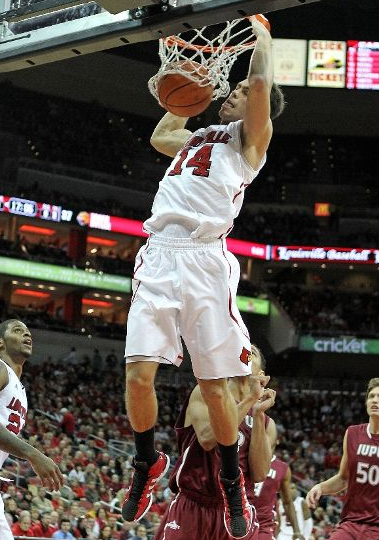 I feel like Kyle hates being the last player introduced before the game. Where as previous players have relished the opportunity, KK seems to almost just want it to be over with.

Can you imagine if Russ was the last player introduced? He'd have a different costume planned for every game.

Also, the best part about the Kyle introduction is easily the very audible screams from the females in attendance. That actually happens pretty much every time he scores. It's good to be (former) king.

Zach Price has become my new favorite player to watch. Anytime the ball is in his general vicinity he just starts jumping repeatedly, as if this is somehow going to hide the fact that he's not really sure what he's supposed to be doing.

Huge fan, though, and I truly do think he's going to wind up being a quality Big East center. He's got the two biggest unteachable assets in basketball: size and skill.

Student section Batman gets a little CC love and then promptly doesn't show up for a game. That's a call out, my friend.

Rumors surfaced early that Nick Lachey was in the building, and my friend Dan (who's getting way too much pub on here these days) honestly spent more time in the first half trying to spot him in the crowd than he did watching the game.

They have some sort of weird Cincinnati connection. I don't know.

Louisville set a season-high for total points, field goal percentage, and field goals made, and a season-low for blocked shots and made three-pointers.

If this isn't Classic Russ, I don't know what is: 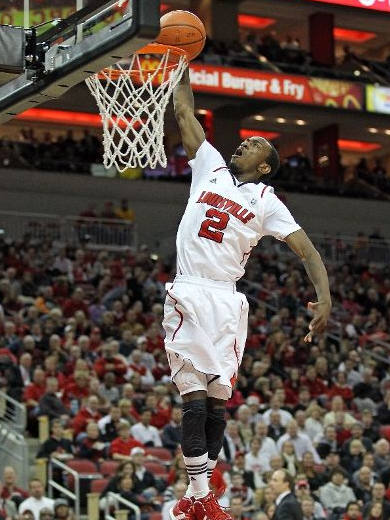 The more I write the more I realize I'm every bit as disappointed with Rick as he was with his team. I need an MJJ cross in my life before Christmas.

Ultimately, a 30-point win is a 30-point win. The Cards have one more game Saturday against a team they should defeat by a similar margin, and then cupcake season is over and done with.