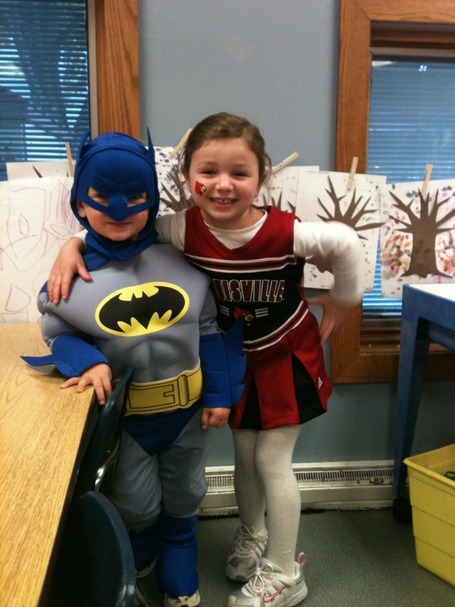 A future Cardinal cheerleader and a kid who idolizes the Batman guy in the student section. Each aspiration is equally admirable.

Yes, this was a Halloween picture. Yes, we're backed up on news and notes picture submissions. Yes, I have an unhealthy obsession with Mary Hatch from It's a Wonderful Life.

Just in case you missed the extensive piece in the Sunday edition of the Courier-Journal about the financial success of U of L athletics, here it is.

When the U.S. Department of Education released its annual revenue and expense figures for college sports last month, the University of Louisville’s totals lit up the scoreboard.

For the fiscal year that ended in June, U of L reported $87.74 million in athletic revenue, ranking 16th in NCAA Division I, the organization's classification for its largest schools. And for the first time in this government index, which was created to monitor gender equity statistics among schools, U of L’s revenue exceeded that of the University of Kentucky.

More surprising, perhaps, was that U of L’s $40.89 million in reported men’s basketball revenue was nearly $12 million more than the next-closest competitor, Duke, and surpassed the revenues of all but 19 major football programs.

Eric Crawford then compares the finances of the U of L and UK athletic programs. 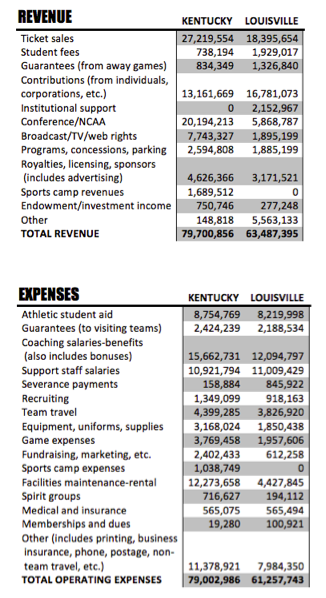 Spencer Hall ranks all 35 bowl games in order of excitement and interest, and has the Belk Bowl featuring Louisville and NC State at No. 34.

34. Belk Bowl: NC State vs. Louisville. It is only appropriate that a bowl game involving Tom O'Brien would make me think of shopping for sensible, unfashionable, and affordable pants. It would also be appropriate if the stadium would just pipe inoffensive pop music through the PA at all times during this game for the department store feel, since both teams have been literally inoffensive (93rd in total offense for NC State, 103rd for Louisville) and hard to pay attention to for long stretches of time without drifting away to something else. Teddy Bridgewater will make something up and win this game. The rest will be bland affordable slacks for the eyes.

This is what can happen, Charlie. I'm not sayin'...I'm just sayin'.

SB Nation places Louisville at No. 7 in its latest college hoops power rankings.

Word out of Trinity is that both LSU and Kentucky were on campus Monday to see James Quick and company. I'll let you draw your own conclusion as to which presence we need to be more worried about.

The distance between No. 4 and No. 5 is substantial. Frosty allowing Karen to travel in a freezing box car with him to the North Pole sans any sort of adult supervision always horrified me.

You don't even want to know how long I could write about this.

There are now just 15 unbeaten teams in college basketball, a group that includes each member of this area's big three (Louisville, Kentucky, Indiana). I suppose this is what we're getting in exchange for the bridge fiasco. Sweet deal for me.

Andrea Adelson takes a final look at the 2011 Big East regular season and names Teddy Bridgewater as her newcomer of the year.

Newcomer of the year: Teddy Bridgewater, QB, Louisville. Bridgewater is a big reason why the Cardinals were able to go on their 5-1 run to close the season. He set the school record for passing yards by a freshman with 1,855 yards.

I tweeted about this on Saturday, but the following shirt was available for purchase literally five mintues after the UK/North Carolina game ended: 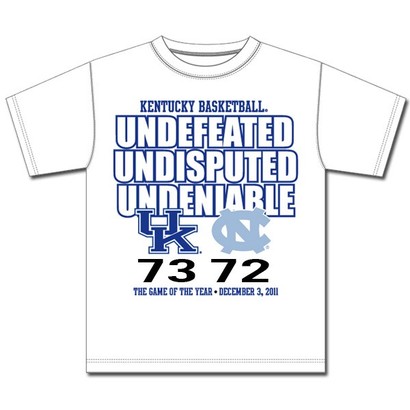 We can rip on the sellers all we want, but you know there are people buying each and every one of these shirts ("Focused. Determined. Ready. Terrence Jones Gets A 92 On His Chemistry Quiz: 12/6/11") coming out of Lexington.

Long-time readers (reader) of the blog will know that I've actually been clamoring for Billy Minardi Classic Champions t-shirts for years. Except the year we lost to UMass. That would not have been a t-shirt I would have purchased nor worn.

The Belk Bowl has opened as a pick 'em.

And finally, Chane Behanan has been named national Freshman of the Week by StatSheet.com. The same website also named Peyton Siva its Big East Player of the Week.