No. 4 Louisville at No. 3 Kentucky Preview

Share All sharing options for: No. 4 Louisville at No. 3 Kentucky Preview 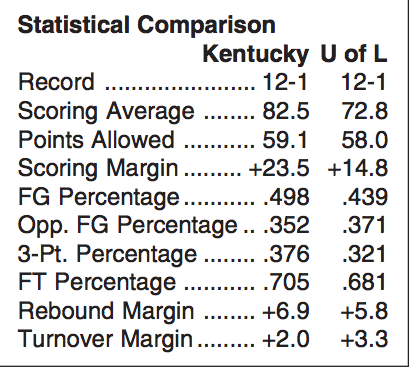 "I'm going to have a lot of fun with Louisville." --Michael Kidd-Gilchrist

"This game is going down in history as one of the best games ever." --Chane Behanan

"I think Kentucky is the better basketball team right now. Running up and down and trying to outscore Kentucky would be a futile attempt to try to get a 'W'." --Rick Pitino

"We don't send Christmas cards, but we're cordial to each other. I went up to him, talked to him, told him he's doing a fabulous job with his team, the way they're playing, blah, blah, blah. And he said, 'Your team's really good and dah, dah, dah.' OK?" --John Calipari

"It's (Rupp Arena) a very hard place to play. I'll just leave it at that." --Kyle Kuric

"When I moved to Kentucky, I got the feel for it and understanding of it (the rivalry). It's serious, real serious." --Chane Behanan

"I haven’t bought a ticket to a game in a long, long time, but I would pay to go to this game. You can’t draw a rivalry like this up any better." --Tim Welsh

"It’s a big game for our fans, but it’s a regular game for us really, and we’re going to go out there and try to win. They just want us to win so bad. They’re always talking about it. They’ve been talking about this game since the beginning of the season." --Doron Lamb

"I love to go against good point guards. It’s just something that’s always there. Kentucky is a great school. They have great players and they’re definitely the most talented team in the nation. We’ve just got to come in there and play team ball and continue to execute." --Peyton Siva

"Every guy on their team is a pro." --Chris Smith

"Similarities? We've both taken three teams to the Final Four, we both got fired in the NBA and we're Italians with big noses. I respect what he's done, respect the program, respect the city and the school." --John Calipari

"There's no other state, none, that's as connected to their basketball program as this one. Because those other states have other programs. Michigan has Michigan State, California has UCLA, North Carolina has Duke. It's Kentucky throughout this whole state, and that's what makes us unique." --John Calipari

--Kentucky currently owns the nation's longest winning streak at 43. The Wildcats have not lost at Rupp Arena under head coach John Calipari.

--This is the first time Louisville and Kentucky have ever met with each boasting a top five national ranking.

--UK is 58-1 under John Calipari when holding an opponent to 67 points or fewer.

--Over its first 13 games of the season, Louisville has produced 15 runs of 8-0 or better. The Cards forced their opponents into 28 scoring droughts of three minutes or more.

--Kentucky leads the country with 9.4 blocks per game.

--Louisville has played a game on New Year’s Eve on nine previous occasions, compiling a 3-6 record in those contests.

--This is the 30th meeting between the teams met in the 1983 NCAA Tournament, prompting the renewal of the annual series. Kentucky leads the series 19-11 over that span.

--Louisville is 5-15 all-time against Kentucky in games played in Lexington.