Share All sharing options for: Louisville/Kentucky Afternoon News And Notes 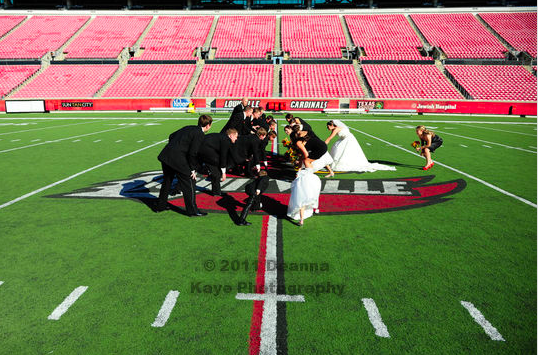 So the groomsmen for Ken and Mandy's wedding wanted to give them the wedding present of having the picture above featured on Card Chronicle. I prefer electronics and/or cash, but whatever, that's me. Again, I don't judge. Unless I think you're looking at me the wrong way, in which case I will rip on your shoes in my own mind for a solid half an hour.

To Ken: Congratulations on landing such an awesome woman (the picture more than implies it) and I'm sorry you have such cheap and unambitious friends.

To Mandy: I apologize for all the unnecessary aggravation Barry Manilow has caused you. Also, if we ever meet I will sing that song because it's better than sex.

Eric Crawford does a better job than I could have addressing the ridiculous "Louisville Doesn't Exist" campaign.

First, it flies in the face of logic. Philosopher Rene Descartes, long before Adolph Rupp ever graced the sidelines of Kentucky, theorized his own existence with the dictum: "I’m on a T-shirt, therefore I am" (roughly translated in the French, Je porte un T-shirt, donc je suis).

He then proceeded to prove that his colleague, Isaac Beeckman of the Dordrecht school, also existed by donning an, "I’m With Stupid" T-shirt. The point being, to contend that something doesn’t exist by putting it on a T-shirt is, well, a few cans short of an ontological six-pack.

But more to the point, if Louisville doesn’t exist, how come UK spends more than $1 million per year to get its games broadcast on Louisville’s biggest radio station? How come they want so badly to have shows on Louisville stations? If it doesn’t exist, why does UK come to town to play a basketball game every year? If it doesn’t exist, why does UK roll into town to hold a banquet every season? I could swear they were just here, new president, athletic director, basketball coach all up at the head table having a high time when an off-color joke about the apparently non-existent U of L coach was cracked in front of an adoring Louisville crowd. 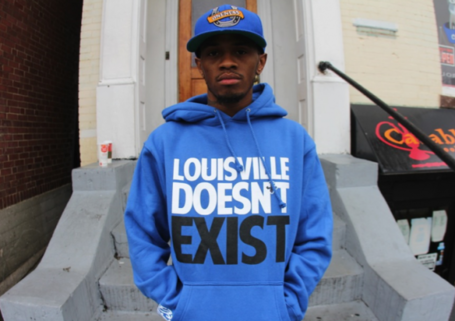 I understand that this is an attempt at humor, but trying to invalidate a rival you spend a considerable amount of time focused on by saying they "don't exist" just doesn't make sense. It would be like if we started a "Kentucky Has No Championships" campaign.

Should Russ Smith have been the first team preseason All-American? I don't think there's any question at this point.

On a related note, I just checked my email from 30 minutes into the future and discovered this piece of breaking news:

just when i think u tard fans couldnt get any dumer i see that u think russ smith should be all america. LOL!!!!!! youre dirty bird ass is gonna look pretty stupid when t jones is dunking all over youre man russ in about 24 hours. LMAO!!!!!!! who is russ smith?????

A Sea of Blue gives its take on college basketball's best rivalry from a Kentucky perspective.

Chane Behanan: "This game is going down in history as one of the best games ever."

He hasn't been wrong so far.

I started to do another future email blurb here, but it wasn't funny...or, it was even less funny than usual. Just know that I'm fully aware of Behanan's undefeated season prediction and equally unaware of the impossibility of that prediction being vindicated. Don't email me about it.

Your officials for tomorrow: Tony Greene, Jamie Luckie, and Michael Stephens. Kentucky fans are already freaking out about the first one.

That KSR post guarantees that Greene could get insanely ill tonight and not work tomorrow's game, and if Kentucky lost he'd still be blamed by at least 15%-20% of the fan base.

Your CBS announcers for tomorrow: Ian Eagle and Clark Kellogg.

I honestly don't even hear announcers during Louisville/Kentucky games. If I did, though, I'm sure I'd disagree with Clark's main theme of the day.

Do you think "Ian Eagle" is his real name? I'm skeptical.

According to Evan Daniels of Scout.com, Rick Pitino and Kevin Keatts were in the building to check out class of 2013 commit Anton Gill on Thursday night.

I don't think there's any question that Louisville needs (you guessed it) Marquis Teague to have a sub-par game in order to walk out of Rupp with a win. That being the case, both sides expect U of L to get after the freshman point guard early and often.

Rick Pitino has gone the Charlie Strong route in terms of his comments in the days leading up to the rivalry game. In order to beat the Cats, Pitino says his team must do "everything."

Well, it worked for Strong. Except I'm not sure Pitino is exaggerating in this case.

Crawford sizes up the Battle for the Bluegrass and takes Kentucky, 81-69.

6). Key players for Louisville — Chris Smith and Gorgui Dieng. That’s not to say players like Kyle Kuric, Russ Smith and Siva won’t play big roles. But if Dieng could have a big day, or even hold his own underneath, it’d make a world of difference for U of L. And Smith makes U of L a much better team when he’s hitting.

7). The pick: UK 81, U of L 69. The Cards will try to make this a physical, half-court game. But they need turnovers and tempo to score and UK should have too much firepower.

Emailing him will probably make him change his pick.

I really think that's going to be a major factor. I'm a professional.

Michael Kidd-Gilchrist: "I'm going to have a lot of fun with Louisville."

Chane Behanan will be battling history tomorrow afternoon against Kentucky.

Saturday's game will mark the highest (or lowest, I guess) combined rankings of the two teams in series history. The previous best (probably should have just started with that) was the first meeting after the original Dream Game when Kentucky was No. 2 and Louisville was No. 6 at the beginning of the 1983-84 season.

Jeff Eisenberg looks at how the Dream Game revived the Louisville/Kentucky rivalry.

"It's a unique thing. There's no other state, none, that's as connected to their basketball program as this one. Because those other states have other programs. Michigan has Michigan State, California has UCLA, North Carolina has Duke. It's Kentucky throughout this whole state, and that's what makes us unique."

If the shoe fits anyone, wear it."