Because sometimes you don't need to use your own words. 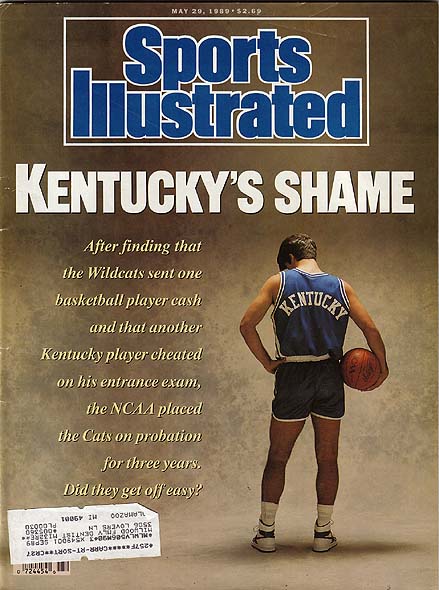 "Kentucky's basketball history is as much about NCAA investigations and allegations of payoffs and being shut down for an entire season for point shaving as it is about winning championships." --A March to Madness

"For years, ordinary fans have rewarded University of Kentucky basketball players with a loyalty that is nationally known. What is less known is that a small group of boosters has been giving the players something extra: a steady stream of cash. The cash has come in various amounts - as little as $20 and as much as $4,000 or more - and it has come often. UK players have received what they call ‘hundred-dollar handshakes' in the Rupp Arena locker room after games."--Lexington Herald-Leader, 1985

"Mary Wilson shifted uneasily on a couch when asked about improper recruiting offers made to her son Ben, who before his death last year was widely considered the nation's top high school basketball prospect. It was the same couch in her South Side bungalow where Mrs. Wilson had listened intently as Ben wavered between picking a school that offered the most money or a school that offered the most in education and basketball. 'We're talking about a lot of money,' Mrs. Wilson said recently." --Lexington Herald-Leader, 1985

"Now, the NCAA was faced with Kentucky being caught once again red-handed and, naturally, denying, denying, denying. What would it [the NCAA] do? Rex Chapman, the Boy King decided not to wait for an answer. On May 13th, he announced he was passing up his last two years of eligibility to turn pro. Chapman insisted the Mills investigation had nothing to do with his decision. If you believe in that then you believe in Santa Claus." --A Season Inside

"Once, I was on a flight with Rupp and sat with him in the first-class section. He had about six Kentucky bourbons in less than an hour and was about halfway to the wind. I told him that I was an attorney who represented some basketball players. Now, I had never met the man, and the first significant thing he said to me was, ‘The trouble with the ABA is that there are too many ni--er boys in it now.' I sat there just stunned. That just killed my image of Adolph Rupp the great coach. Maybe it was because he had too much to drink, but even so..." -- Loose Balls by Terry Pluto, Simon & Schuster, 1990, pg. 241.

"If you have hate in your heart, let it out." --Clayton Bigsby