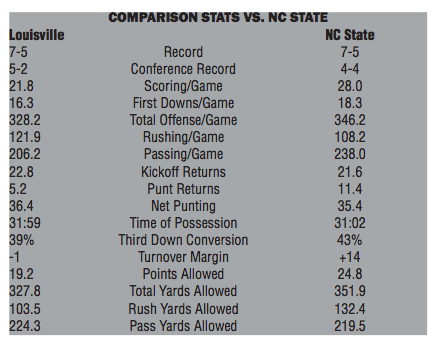 NC State won a total of seven games this season, including 4-4 in the Atlantic Coast Conference. The Wolfpack, under the guidance of head coach Tom O’Brien, have won three of their last four meetings, including a 56-41 win over Maryland, where they overcame a 35-point four-quarter deficit.

The Wolfpack have been led by their defense, which ranks 39th in total defense and sixth in turnover margin.
Cornerback David Amerson leads the nation in interceptions with 11, while free safety Brandan Bishop is 11th nationally with five picks. As a team, the Wolfpack lead the nation with 24 interceptions.

NC State is led offensively by quarterback Mike Glennon, who has thrown for 2,790 yards and 28 touchdowns. He has thrown for over 300 yards three times this season and tossed five touchdown pass in the comeback win over Maryland to end the regular season.

The Wolfpack don’t have a go-to-receiver, but do have five players with 30 or more receptions. T.J. Graham and Washington lead the way with 39 receptions each. Graham was named 1st team ALL ACC in 2011 as a specialist does everything for the Wolfpack. His 39 catches went for 641 yards, an average of 16.4 yards per catch. He also averages 12.1 yards per punt return (long of 82), and 22.5 yards per kick return, and is the ACC's career record holder in kickoff return yardage.

It's the culmination of the more unexpectedly pleasant and exciting Louisville football seasons ever. It's a little bit about setting the tone for the future, but it's more about sending the seniors off on a high-note and making sure the 2011 season is remembered as fondly as possible. Above all, it's the chance for this group of Cardinals to go out as champions.

The Charlie Strong sweatshirt led us to two wins to end the season, but it was the purchasing/utilization of the pullover that changed the entire tide of the season. The sweatshirt will be available for a midgame switch, however, as will the "new" "property of Louisville Athletic Dept." hat.

Pregame Meal: Hosting a watch party at CC Headquarters (also the viewing location for the WVU game). Tailgate crew is bringing all the afternoon/late game classics. I will eat them. There will also be beer. I will drink some.

Doesn't seem especially bold, but Louisville has never done it in a bowl game. Don't be afraid to bust that one out tonight. Just make sure you have a condom.

I finally got one right in the regular season-finale with Teddy, so why fight it here?

--The Cardinals have won each game by at least 19 points.

--Art Carmody broke the NCAA record for most career extra points when he nailed his 227th against NC State in 2007.

--Louisville's running game picked up a struggling Brian Brohm in the 2007 meeting. The Wolfpack defense held Brohm to 20-for-33 passing for 251 yards, but Brock Bolen rushed for 112 yards and Anthony Allen added 85 to lead the rushing attack.

--Lamar Myers led the defense in 2007 with 11 tackles and two fumble recoveries.

--NC State turned the ball over five times in the 2007 contest and were held to 85 yards on the ground.

--The Wolfpack fumbled eight times and lost six of those fumbles against the Cardinals in 1994. Both totals are the most by a Louisville opponent in games dating back to 1989.

--This is Louisville’s 16th post-season appearance. The Cards are 7-7-1 all-time in postseason play.

--Louisville's Charlie Strong is only the third coach in school history to take his team to a bowl game in his first two campaigns. Bobby Petrino and John L. Smith were the other two head coaches to accomplish the feat.

--The Louisville offense averaged 16.3 points per game in first seven games, but 29.4 in its last five.

--Louisville's four lost fumbles is the second-lowest mark in he country, behind only Alabama.

--Wolfpack cornerback David Amerson was 1 of 3 finalists for the Thorpe Award, named a Walter Camp All-American, and won the Jack Tatum Award. He leads the nation in interceptions with 11, an amazing four more than any other FBS player.

--David Amerson has more interceptions by himself than 63 FBS teams.

--Thanks in large part to Averson, State leads the nation in interceptions with 24. That mark is also a school record.

--Louisville has been extremely impressive in the redzone away from home, scoring 17 times in 20 chances, including 12 touchdowns.

--"They’re a team similar to us. They won five of their last six games. We went through injuries. They went through playing freshmen. As the freshmen got better and grew more and more as the season went on, they got to be a better football team. You’ve got one team that won five of its last seven to get there, and you’ve got another team that won five of the last six to get there. You’ve got two teams that have been pretty good over the last half of the season."--NC State head coach Tom O'Brien

--"I love road games. I feel like that’s when we play our best. Our away record is better than our home record. On the road, I like everybody against us." --Calvin Pryor

-- "[DC]Mike Archer and (LB coach Jon) Tenuta make them a pressure team. They disrupt the rhythm of an offense and bring pressure. [CB] David Amerson has a nose for the football, but we can’t let one player decide the outcome."--Charlie Strong

--"I felt like I had a lot of confidence in myself and teammates had confidence in me that I could lead us to a lot of victories and get us to a bowl game. My personality is kind of laid back so I didn’t worry about replacing Russell. I just let things play out." --NC State QB Mike Glennon

--"We’ve all made the comparison that (Glennon)'s Matt Ryan reincarnated. The way he throws the ball, there’s a lot of similarities with Matt. It’s just a question of playing and gaining experience. He learned a lot as the year went on. You would expect that. He’s a kid that studies the game and works at it."

--"(Glennon) can really put the ball in a tight window. And he’s smart and savvy. He doesn’t throw many interceptions. We have to stop their pass game and make them a run-first offense and that’s something people haven’t been able to do, particularly late in the year." --Dexter Heyman

--"(Teddy Bridgewater) has a strong arm and he can move a little bit so you want to rattle him back there a little bit so we can make some plays in the secondary. It’s imperative that we get to the quarterback." --NC State CB David Amerson

--"We are who we are. We’re the team we put together from the sixth game of the year on and just kept getting better."--Tom O'Brien

--"I had no idea it would be like this. I just thought it was just like a regular game — you prepare for it and then you go out and play. I didn’t know about the Belk shopping sprees and stuff like that." --Teddy Bridgewater

--"It was a lot of giggles when they went to stretch. They weren’t locked in. When I said Chi (Josh Chichester) call them up, let’s go to work, they kind of halfway said, ‘Let’s go.’ So I said get off the field. When I’m ready for you to get back on I’ll call you over." --Charlie Strong

--"We want to create turnovers every game and that’s something that we really haven’t done extremely well this year. But the beautiful thing about football is you have one more opportunity. We have one more time to go out here as a senior group and really show what we’re all about as a part of the Louisville football team, and forcing those turnovers is really going to be huge for us." --Dexter Heyman

--"I definitely want to come out and do all I can to help my team and play my type of football. We’re as solid as we’ve been all season. I think we’re going to go out and have a good performance." --David Amerson

--"Anytime you get to a situation we were in you're either going to cash your chips in or you're going to make a move. We made a move." --Tom O'Brien

--"I think both of us are very resilient, and I think both teams have stayed with it." --Tom O'Brien

There is a very large part of me that's worried about this Louisville team viewing the Belk Bowl as a reward rather than having the business trip mentality they did a year ago in St. Petersburg. That said, they've surprised me all season and there's no way I would pick against them tonight.