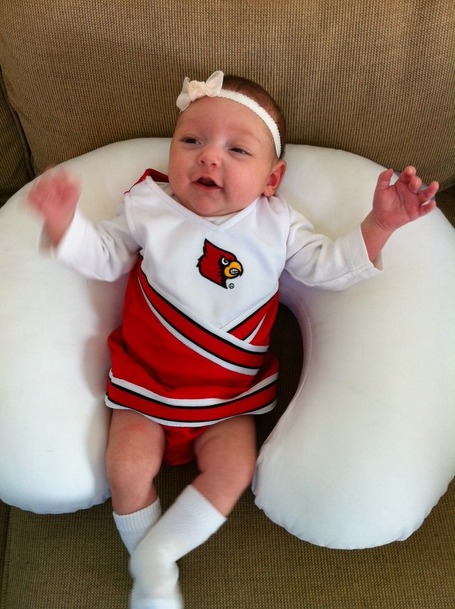 That butt cushion is far too large for that child. Although she appears to be enjoying herself, so whatever.

Some rough news to start the day (merry Christmas!) as the U of L women's team has lost senior forward Monique Reid for the season to a knee injury.

A magnetic resonance imaging (MRI) test was performed at Jewish Hospital in Louisville the next day but found no ligament damage in her knee. Reid saw knee specialist Dr. Caborn when the Cards returned from Pullman, which determined the injury was season ending. Reid will have surgery to repair the damage on Jan. 4.

"This is a big blow to our team but we will not use it as an excuse when we begin conference play," said head coach Jeff Walz. "Mo has been a big part of our offense the last two seasons and we expected a big senior year from her. Unfortunately she has been plagued with injuries this season and we look forward to a full recovery for her. We've faced adversity before, and we will rally together as a team. We're going to need contributions from everyone to pursue our team goals."

Reid was averaging 13.1 points and 5.3 rebounds per game and had been a first team All-Big East selection in each of the past two seasons. It goes without saying that this is a big, big loss.

CBS' Matt Norlander has a terrific piece on Rick Pitino - who is off to an 11-0 start for just the second time in his career - and the job he's done with a Louisville team that is good and getting better. The post also includes an interactive timeline highlighting all of the Cardinals' injuries this season.

What's clear: Pitino's in the midst of one of the best coaching jobs of his career, which is truly saying something, since that compliment gets pushed Pitino's way every few years. But with everything Louisville's gone through this season, it needs to be emphasized that Pitino getting his team off to an 11-0 start -- something he did Tuesday night with a close, gritty, trademark Pitino win, 69-62 against College of Charleston -- is at or near the top of his accomplishments.

If you want tangible evidence, it's only the second time he has coached a team to 11 straight victories to begin a season. His '92-'93 Kentucky kids went 13-0 before dropping one. That legendary '96 UK team, which I believe to be top three in the history of college basketball, was flawless in the SEC and finished 36-2 but lost game No. 4 that year, coincidentally, to John Calipari at UMass.

Pitino and the Cardinals have played a formidable schedule (including Ohio, Butler, Long Beach State, Vanderbilt, Lamar and Charleston, six teams on the slate that can very realistically win their conference or make the NCAA tournament), and we've yet to see a hiccup despite an array of injuries that would at least hamper most other teams.

Is it smoke and mirrors? No. Not when a team's gone almost two months playing this kind of defense, and especially with Louisville's track record. The question: Can the team go from good to great? The New Year's Eve game against Kentucky stands as the unfair test. Anything but a win against hated Calpari and the 'Cats and the Cardinals won't be considered worthy of where they currently sit in the rankings.

Before those games are Western Kentucky (Friday) and the first Big East matchup of the season, home against Georgetown on Dec. 28. But it's remarkable we're even having the discussion. I doubt any other coach could overcome so many players missing so many games and get to Christmas without a scratch. The next two games don't amount to but a fraction of significance to what's waiting on Dec. 31.

All this Louisville team has to do to impress the nation once and for all is beat Kentucky and all those pros in Lexington. Unfair, but true. Pain don't hurt Louisville. But losing badly to Kentucky will.

Our man Twanee in Atlanta (who sent in the info. about the U of L/UK rivalry hats a few weeks ago) had a special customer pick up one of the new Cardinal caps yesterday: 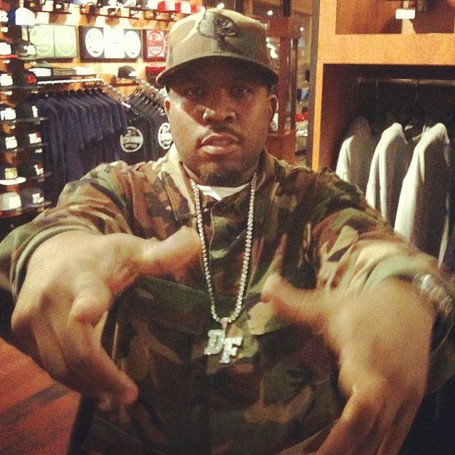 That would be Big Boi from Outkast showing some Louisville love.

He also told Twanee that he and Andre 3000 would be releasing separate solo projects before the new Outkast album drops.

U of L sports, Cardinal-clad babies and dogs, and inside hip-hop information: that's what Card Chronicle does.

U of L is also fourth in the country in the Sagarin ratings, and is first in the nation with six wins over top 100 teams.

I recently got a Twitter message telling me to check out the current "top comments" on the Darius Washington video. 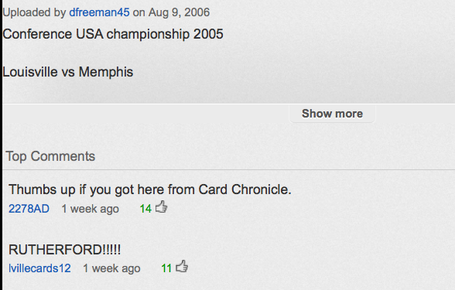 Well done, folks. I only pray we get the opportunity to make Brick Rolling an annual occurrence.

Charlie Strong followed up yesterday's announcement about the basketball team's academic success by tweeting that 34 football Cardinals achieved a GPA of 3.0 or better, and two achieved a perfect 4.0.

The football team arrived safely in Charlotte last night and is going through its first Belk Bowl practice as you read this.

Nah, we don't want them in our conference though. That Air Louie freaks us out.

Check out bythesidewalks' video about the only thing she (33%) wants for Christmas.

1. Hermie is the most obviously homosexual non-homosexual character in the history of television. Ignorance may be bliss but isn't always healthy, '60s.

2. Santa is a huuuge dick. Seriously, the man has zero redeeming qualities until the final five minutes of the special.

4. I used to sing "There's Always Tomorrow For Dreams to Come True" to one of my older brothers whenever he had lady problems (frequently).

5. How did Yukon Kornelius not become a Christmas icon? Is it because nothing rhymes with Kornelius? Do people find prospectors to be unrelatable? I just don't get it.

The man is loyal, he's trustworthy, he's hilarious, his facial hair is incredible, he has the voice of an angel ("Silver and Gold" deserves mainstream radio play, but that's a different subject entirely)...I mean he - sans weapon, mind you - took on the Bumble all by himself for f--ks sake.

Rick Pitino said earlier this week that we would never schedule Big East football members Boise State or San Diego State in basketball. It's hard to blame him here. Basketball isn't football, and non-conference scheduling - especially around the holidays - is a delicate art...yes, a delicate art...maybe you're too histrionic.

A reader/journalism student at Ball State/owner of the Preston D. Knowles cat who made an appearance on the site this summer (what up, Rachel?) wrote about the magic of Card Chronicle (I added the "the magic" part) for one of her last classes and managed to obtain this gem of a quote from one Danrad "Chicken" Knowles:

"They still talk to me from time to time even though I committed to Houston," Knowles said. "Fans from other schools can't compete with Louisville fans."

I have a borderline unhealthy love for the awful movie The Sixth Man, and getting a commitment from a player named Anton has me fiending for us to sign a Kenny so I can say "A and K, all the way" until I throw up in a couple of years. Even if it doesn't happen, in two years I will be saying "ANT, NO!....Let it go" until I have only one friend left.

Just as Rick Pitino said he would last week, Wayne Blackshear has been dribbling and going through individuals for the past few days. If I had to guess, I'd say he'll see the court for the first time during the second week of January.

Elvis Dumervil is getting the love he deserves in Denver.

The Trinity football team finished No. 1 in four of the nine major national rankings. Regardless of where your local loyalties lie, that's pretty unreal.

Louisville commit Quentin Snider scored a game-high 29 points in Ballard's loss to Bullitt East last night at the King of the Bluegrass tournament. Cardinal recruit Derek Willis had 15 points and 14 rebounds for the victors.

If not for the heroics of seniors Terry Rozier and Robert Fomby, that No. 1 ranking in the Plain Dealer Top 25 poll might be a thing of the past.

"We are the hunted," said Shaker Heights coach Danny Young, whose club improved to 5-0. "It can wear on you."

Playing for the second night in a row after defeating Euclid on Tuesday might have played a part in it. But no one on the Shaker side was using that as an excuse. After letting a 13-point, home-floor advantage disappear in the third quarter, the Raiders had all they could handle from the Lions.

But with Rozier scoring 10 of his game-high 28 points down the stretch, the Raiders scored the game's final six points to get the win.

"There are no excuses," said Louisville recruit Rozier. "We practice hard. Every team is going to come in here with the target on us. We have to live up to the hype."

And finally, the fine folks at Big Time Yurts have contacted us about possibly doing a Card Chronicle shirt (or Yurt) or two. Below is their original idea, but they'd like some feedback about what you'd like to see. 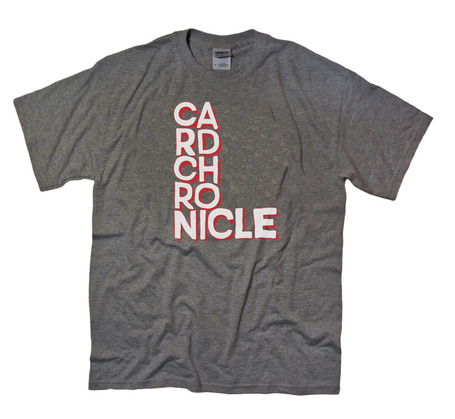 Suggestions and thoughts are appreciated.