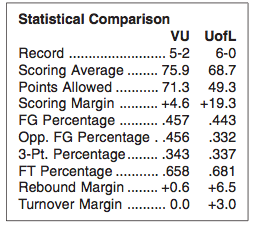 About Vanderbilt (Via U of L game notes)

Louisville plays its fourth straight in the KFC Yum! Center as the Cardinals face the Vanderbilt Commodores in the BIG EAST/SEC Challenge on Friday. Vanderbilt (5-2), ranked No. 19 in the ESPN/USA Today poll and No. 20 by AP, fell 70-82 in overtime to No. 11/11 Xavier in its last game on Monday in Nashville. Senior guard John Jenkins led the Commodores with 20 points and seven rebounds in that game, while Jeffrey Taylor and Lance Goulbourne added 18 points each. Vanderbilt was outrebounded 54-33 in the game, including allowing 25 offensive boards.

Vanderbilt’s only other loss was to Cleveland State 58-71 on Nov. 13. Jenkins leads the SEC in scoring at 20.2 points per game, and has scored in double figures in 39 straight games, dating back to the 2010 SEC Tournament. The Commodores are picked to finish second in the SEC behind Kentucky. Vanderbit is averaging 75.9 points a game and has connected on 57-of-166 three-point goals this season (.343). The Commodores were 29th nationally in scoring last season (75.9 ppg).

Louisville leads the series 8-7 and has won five of the last seven meetings, including a 78-62 victory in Freedom Hall in the last meeting on Feb. 6, 1994 when DeJuan Wheat scored 21 points to lead the Cardinals.