Share All sharing options for: These Aren't Your Older Cousin's Memphis Tigers: Ghosts of Memphis State-Louisville Pastner and Future

There are a lot of storylines as the Louisville Basketball Men's Cardinals 2011-12 host the Memphis State Tigers Saturday, 4 PM at the Yum! Center, and like all things in life, they can be broken out into short-term, medium-term and long-term storylines, both past and future. Let's hop into the DeLorean and head back to the 1980s and 1990s, the early 2000s and then next week, March 2012 and March of like 2014 just to see if we have flying cars finally.

WARNING: DON'T TOUCH ANYTHING BECAUSE YOU COULD SCREW IT ALL UP WE COULD ALL TURN INTO DINOSAURS. 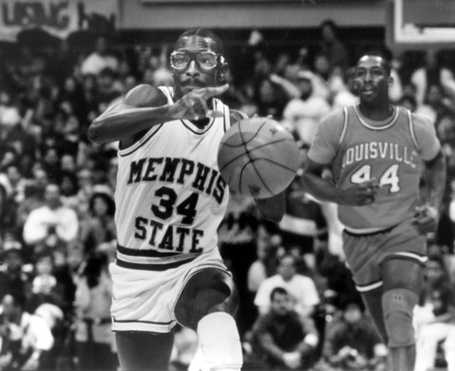 One of my earliest memories is of hating Elliot Perry. People my age and older will remember Perry and his stupid socks and goggles. He was the Dwayne Wade of his day in that it always seemed like LaBradford and the Cards got the best of him in college, and then he had a much longer NBA career than Smith or any of his other Cardinal rivals. Man, I would have lost so much money on a Reece Gaines v. Wade total NBA points scored head-to-head bet. Anyway, most if not all of our current players weren't born yet when those classic games were played, and honestly has anyone ever met a Memphis fan? Other than this paragraph, I have not thought about the 1980s Memphis State games in a long, long time, and so while it would be awesome if they showed highlights tomorrow, I think the rivalry - to the extent one still exists - is less about the 1980s and 1990s than..... 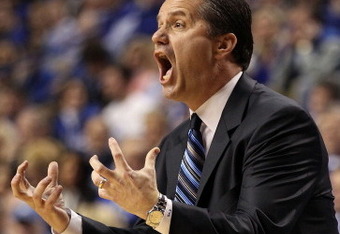 Let's be honest: if Josh Pastner or Brad Stevens or anyone other than John Calipari coached the Memphis State Tigers in the last throes of our CUSA days, we probably wouldn't care about Memphis State. We played some great games against them (the 2003 CUSA championship comes to mind) but they for the most part were non-factors in CUSA and the NCAA tournament before 2005, culminating in a certain moment that has been beaten to death around here. So lets watch it again:

Wow that is awesome. Anyway, the rivalry took on a much different tone in the 2000s thanks to Coach Cal and his shenanigans. And that game and situation was the PERFECT way to leave those dirtbags behind. Then Cal left for UK and Pastner took over, and kept the pipeline coming with McDonalds' All Americans, leading to....

So the Memphis team that comes into the Yum! Saturday is much closer in DNA to Cal's teams than Larry Finch's teams (google it kids) in that they will be super athletic, play fast, run, run, run and start highly ranked, young recruits. Their best players Will Barton, Mad (Real Mad) Joe Jackson, and Adonis Thomas were born in 1991, 1992 and 1993, respectively, and none of them would be eligible for Junior Homecoming King if that's a thing in that they are just a freshman and some sophomores.

I TOO CAN LOOK LIKE I AM COACHING HARD

Memphis started the season in the average poll position of #10 (and the median!) but has sandwiched wins and losses: wins against Belmont and Tennessee around a loss to Michigan and sandwiching wins against three crappy teams between losses to Georgetown and Murray State. But make no mistake, this will be the most pure talent on display at the Yum! yet this year, with the obvious exception of the Taylor Swift concert. Throw in the 4 PM national game of the week showcase on CBS and Rick Pitino's promise to run with Memphis (which means there's a 75% chance we play a ball possession, slow-down game with 30 seconds off the clock each trip) and we have the makings of a classic, classic game, regardless of the names on the front of the jerseys and what happened between these two schools 5 or 25 years ago.

Because of the talent and Memphis's style, especially the super-complicated, highly precise offense that is so mind numbingly technical less sophisticated readers should skip the next 6 words: take your man one-on-one, our individual defensive abilities will be put to the test tomorrow and will tell us a lot about our potential to stop other similar, highly complicated offenses in a certain game a few weeks from now. Also, because this game is on the national stage, Memphis is coming off a terrible loss and everyone with a tie and a no-accountability job providing "insight" into college basketball is rooting for us to lose, winning this game and looking impressive doing so (which makes 1 win count as 1.2 in the computer rankings) will help quiet critics or at least prevent loads of sanctimonious gasbaggery and a double-digit drop in the polls. So, ya, big game.

Who knows where this Memphis team will be at the end of the year, but any out-of-conference win is a good win for seeding purposes. And on the off chance you know one actual Memphis fan (I know none) or run into them on the internet (I never have and I spend A LOT of time on the internet, like probably an unhealthy amount if we are being real) losing would give them bragging rights for ahwile. Also, the whole "NBA/McD's AA's v. 3+ year player development" argument could get a huge boost in our favor tomorrow if our mix of the two, led by the older players and implementing a good defensive strategy, pulls out a win. If we lose because we play Memphis's game and they are more talented, well, that would be a scary thing as we try to take the next step from "lots of regular season wins" to "deep March run" that has eluded us the last two years.

Kevin Ware, Russ Smith, Rak Buckles and Chane Behanan are four key pieces for lots of wins in 2011 and 2012 and tomorrow will be the first time all four of those guys will play significant (or any, really) minutes together. Now that we are approaching "just unlucky" status with injuries (recently upgraded from "You've got to be f'in kidding me" and weeks beyond "I don't believe in curses but I believe there is a curse at work here") we have enough guys that we can play any style: slow down, grind it out or run with an athletic team like Memphis. So look for more Siva-Russ-Kuric-Rak-Swop type lineups, with Ware getting more minutes than someone like Justice at the 1 or Chris at the 3. Can Chane hang in a game like this? Will be really interesting to see, and as we look forward to other, athletic run/gun teams on the schedule (like the NCAA tournament for instance) this game could be a good test for our guys. And for the whole current operating theory of our program (see above). No pressure.

What To Watch For: Chances to catch your breath and turnovers. Pitino says he's letting us loose this game, and as long as we can speed ourselves and Memphis up in a way that causes turnovers but doesn't risk turnovers, it should be a lot of fun to watch. As was pointed out earlier this week, Memphis is able to go fast without turning the ball over, and they shoot a high percentage. If we can keep their shooting percentage low and score in transition, we have a good chance to extend our win streak against Memphis State to 2 games. Finally, the magic that is the Yum! home court advantage should be helpful, especially against a young team like Memphis coming off a bad loss.

CardsFan922 Prediction: Close, high scoring game. I think we'll win but would also not be shocked to see Memphis pull this one out in a very hostile environment. If it turns into just a run-and-gun game and Memphis's talent prevails, well, it's not the end of the world. But it could give ammo to the haters and make a big difference in the type of match-up we want to see in March.

Let's just hope Charlie Strong and Siva's Dad are there. We need them now, more than ever.