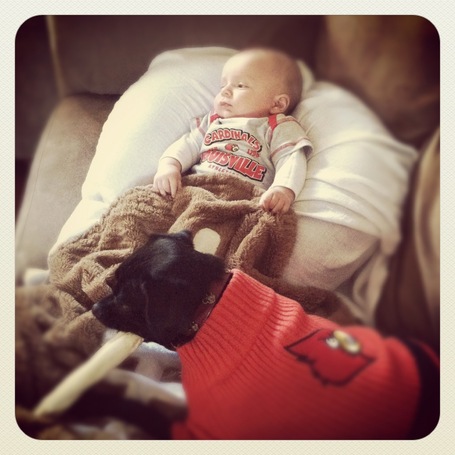 Surprised it took this long, but we've finally got our first baby/dog Chronicloid combo shot.

Love the focus...and the collar coverage on that sweater.

In the wake of Sunday's loss to Murray State, Memphis basketball coach Josh Pastner has spoken at length about his team's lack of focus and need to change. He blames at least part of that lack of focus on Twitter.

Among the players Pastner met with Monday were freshman swingman Adonis Thomas and sophomore guard Chris Crawford, who both struggled against Murray State. Thomas had zero points and zero rebounds in 18 minutes off the bench; Crawford had a game-high seven assists in his fourth straight start but was 1 of 10 from the field.

"Some guys can handle Twitter and some can't," he said.

After Pastner's postgame speech Sunday, the team held a players-only meeting. Sophomore Will Barton, the one player Pastner singled out for his consistent effort, said after the game that he could sense the team wasn't ready to play before the tip. It showed on the court, as Memphis fell behind 11-2 and played catch-up for most of the game.

Barton was named Conference USA Player of the Week on Monday after averaging 27 points and 9.5 rebounds against Miami (Fla.) and Murray State, which jumped into the AP poll Monday at No. 24.

In related news, some guys can handle Call of Duty and some can't.

Seriously though, it's pretty clear that MSU is going to come out with an insane amount of intensity on Saturday afternoon. There's no question that we're going to get State's best shot.

The Internet's worst-kept secret right now is that Michaelee Harris injured his knee again during practice over the weekend and will not play in the Belk Bowl or be able to participate in spring practice. This rumor would seem to be backed up by the fact that Harris was on crutches during last night's autograph session, and by several of his tweets.

Another tough break for a kid who hasn't been able to catch many since he arrived here.

By now I'm sure you've seen or at least head of the "Elf Yourself" videos, but this one is still probably worth your time.

Kevin Ware is practicing today for the first time as a Cardinal. Rick Pitino switched up the team's schedule this week in order to make sure that Ware would get three practices instead of two before the Memphis game. Pitino said during his weekly radio show that Ware likely won't see the floor until the Western Kentucky game on Dec. 23.

You can watch this week's edition of "Courtside With Rick Pitino" (featuring Rakeem Buckles) right here.

Wales will reportedly be joined on the visit by elite recruits Nick Dawson and Josh Harvey-Clemons, among others. This is the type of weekend that could end up taking this recruiting class from good to great.

Todd Graham announced today that he is leaving Pittsburgh after one season to take the head coaching job at Arizona State. This means that Pitt has now had three coaches in 12 months.

I just hope they hire someone we can actually beat.

Stadium Journey has some very high marks for Bank of America Stadium, which will be the site of the Belk Bowl on Dec. 27.

Wow, where should I start? Bank of America Stadium exceeds the "Yum-O" meter in many ways. When attending a game at a different stadium, I like to begin with what is unique and a trip to JJR BBQ fills this category nicely.

The menu is dressed with all of the things you would expect in the South. Be sure you get an extra plate to put all three types of BBQ sauce and try each of them. Although I like vinegar-based sauces, there was mustard-based and tomato-based. I had trouble determining which one I liked most.

If you asked me what to order, I would tell you to get the pulled pork with a side of banana pudding for $3 and wash it down with sweet tea for $5. Several JJR locations can be found on multiple concourse levels with the largest one near section 110. Bring some boiled peanuts with you to your seat, just $3.50 for a generous helping.

There are also many areas to enjoy beer from local breweries, Carolina Blonde being one of my favorites. If you like to choose food and beverages from the regular offerings you find anywhere, then nachos with cheese, hot dogs, sodas and premium ice cream are available.

A reader wanted to me to pass along that New Era has some special U of L/UK hats in anticipation for Dec. 31's rivalry game.

This Belk Bowl shirt is sick, buy one for me: 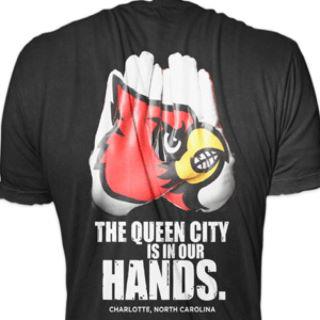 Derrick Caracter is out 4-6 weeks after undergoing surgery to remove a part of a torn lateral meniscus in his left knee.

I had never seen this before, but there's video of the 1992 Louisville/Memphis State football pregame fight on YouTube.

And finally, check out C.L. Brown's piece on the surprise of the Cardinal basketball season thus far, Russ Smith.