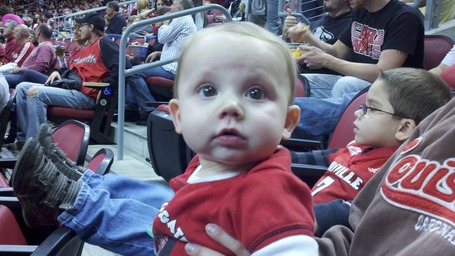 1) Pitino again talked at length about his love for the Big East and his desire for the conference to invite Memphis and/or Temple. When asked if there was still a possibility of Louisville making the jump to the Big 12, he responded: "I hope not."

I'm not sure if he doesn't understand how much these statements upset his supporters, or if he just doesn't care. Sticking with the "I'm going to support whatever is best for this program and this university" would be the better play.

2) Pitino says that Wayne Blackshear will get his sling off today (Tuesday), that he'll be able to resume dribbling and basketball activities in two weeks, and that he could be able to play as early as one month from now.

The two AP voters who put Louisville at No. 1: Ray Fittipaldo and Toni Gennetti. Italians fly together.

Pretty solid story on the emergence of Teddy Bridgewater and what it could mean for Louisville football over the next two seasons.

Here's a visitor's guide to the 2011 Belk Bowl from the folks at Yahoo.

For those in search of transportation to the Belk Bowl, here's an option...

We are looking to fill up a charter bus via Miller Transportation. The Bus is $3,300 and can accommodate 47 people... Would have to pay for the driver's lodging and any tolls or parking fees. The Bus has a bathroom and beers and coolers welcome. Great way to get down there and not have to worry about driving and can sleep, etc. Plan is to leave at 7:00 Am on the 26th and get to Charlotte early afternoon for a night on the town and have the bus come back the night after the game where everyone can crash. We are going to stay downtown near the stadium and there are plenty of rooms available. Right now we have approximately 10 people and we are looking to grow the list to 30+ where its about $120+/- head, but not opposed to going smaller if group is willing to pay for it. We are a group ranging in ages from mid 20's to 40's and all like to drink and have fun. It's all guys so far however if there is a group of guys/girls looking to go then that's fine too. Just looking to fill it up.

If you're interested, you can email the organizer at JPhelps@hogandev.com.

Here is the full schedule of Belk Bowl events, via the game's website:

Teams’ Shopping Spree at Belk (Southpark) 8:00 – 10:00 p.m.
Teams will have the opportunity to pick their own bowl gifts as they will visit the flagship Belk store in Southpark. Belk will roll out the red carpet with the men’s section set up specifically for the players, with electronics displays and an expanded Big & Tall section.

Teams’ Outing to Charlotte Motor Speedway 10:00 a.m. – 1:30 p.m.
A highly unique and exciting experience for the teams. All participants will be given a three-lap ride-along with a driver from the Richard Petty Driving Experience. In addition, a look at the facilities, interactive displays and tire-changing competitions will be held between the schools, and the head coaches will be presented with a special souvenir. Truly a great photo opportunity for the media.

The official media function and last interview opportunities with head coaches and players prior to the game.

Both team marching bands will perform in a spirited competition for the most cheers.

I'll pay every penny I own to anyone who captures video of Charlie Strong belting out "I'll Be" at the Belk Bowl FanFest.

Speaking of Strong in public, a fan captures this interaction with the 2010 CC Man of the Year, which I thought was pretty funny.

I've heard from multiple folks who hang around UC that Collaros isn't exactly...(how do I put this?) admired around campus. This gives a little bit of insight into why.

Class of 2014 star Jalen Lindsey (Nashville) will reportedly be taking an unofficial visit to U of L this Saturday for the Memphis game. This according to Garrett Tucker of Rivals.com.

I've now seen two separate "worst Christmas song" tournaments, and each had "Feliz Navidad" advancing past the first round (one had it in the elite eight). I understand that it gets repetitive, but if you can't get down to the first 45 seconds (hard), then we're never going to share a glass of egg nog.

The Louisville baseball team has received a commitment from Chicago standout Nick Solak.

I really don't even know what to say about this.

Former U of L assistant Steve Masiello is off to a strong start at Manhattan.

And finally, U of L commit Terry Rozier got his senior season off to a solid start by dropping 27 points in Shaker Heights' (OH) season-opening win.