Shenard Holton Appears To Be Transferring

Share All sharing options for: Shenard Holton Appears To Be Transferring

Based on his tweets today, it appears junior safety Shenard Holton is leaving U of L and transferring to New Mexico Highlands University, the current home of former (brief) Cardinal Jordan Campbell. 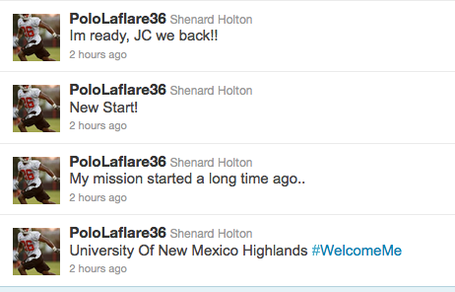 It's been a strange year for Holton. He entered the season as one of the most experienced accomplished players on a Louisville defense sorely lacking in both of those departments. He started the first six games of the season and recorded 25 total tackles. Then something happened and he was not allowed to dress for the Cardinal victories over Rutgers, Syracuse or West Virginia. He played sparingly on special teams for the final three games of the season.

Here's wishing Shenard nothing but the best from here on out. Thanks for the past three seasons.

I hope Hakeem is OK.