Cupcake season is over, and with all due respect to IUPUI and Fairleigh Dickinson, I couldn't be happier.

Beginning Saturday against Memphis State, the Cards will no longer be able to show up, go through the motions and walk away with a 20-plus point victory (not that that's what they've been doing). Charleston's only lost once, and even though Western is way down you know they're going to give a superior effort in the Bucket. And then after that, of course, comes "Cardageddon Week," featuring the Belk Bowl and the Georgetown and Kentucky basketball games.

The week off is an annoyance now, but it's about the last real break we're going to get from the madness for the next three and-a-half months. Take the kids to Chick-fil-A or something.

If it weren't for the return of George Goode, this would probably be the game most likely to get the "I have absolutely no recollection of that happening" award during postseason reflection (sorry, IUPUI, probably you now). It's not that the Cards played poorly or that progress wasn't achieved, it was just...meh. It probably didn't help that there was so much other high-profile action taking place around the same time.

Speaking of George, I thought he looked great. He appears to be in much better shape than he was a season ago, so much so that I had to do a double-take when they announced his name after the game-opening dunk. He finished the day with 17 points and 12 boards while playing a game-high 39 minutes. He also got a great ovation from the crowd both during intros and when he was subbed out in the final minute. Still one of the world's best smiles.

The Knights are going to get kicked around in the NEC a little bit, but it'd be great to see Goode have a big senior year and at least help them make the conference tournament (only 8 of 12 teams make it).

We talked before the game about wanting to see Peyton Siva take (and make) several deep jump shots, and that's exactly what happened. Fairleigh Dickinson was basically daring him to shoot the three, and so he responded by drilling 3-of-6.

In keeping with Rick Pitino's pregame assertion that Siva would be playing at 100% for the first time, he probably played his best overall game of the season, finishing with 16 points and nine assists.

First time we've seen a zone for an extended period of time, so it shouldn't be a surprise that the team took a season-high 29 three-pointers. You would've liked to have seen more than nine makes, but I would have liked to have seen Zooey Deschanel in a bathing suit. You know what I mean? It's not about settling, it's about understanding and patience.

The zone also probably had a lot to do with U of L's season-low turnover total of 10. Surprisingly, three of those came from Chris Smith, who entered the day with the Big East's best (and nation's 7th best) assist-to-turnover ratio.

Highlight of the game may have been Greg Scruggs playing the drums with the pep band for a rendition of the Big tymers' classic: "Still Fly". (Video via Andy Sweeney).

Mike Rutherford fact: "Still Fly" was my walk up to the plate song during the 2002 state baseball tournament at Applebees Park in Lexington. Yeah, I didn't come close to pulling it off.

Couldn't be a bigger fan of Kyle Kuric trying to go trigger-happy. Honestly, when's the last time you found yourself saying during a game, "Kyle needs to stop shooting," or "Kyle! Pass!" Pretty sure it's the same number of times Kyle's been told "no" since late March, 2009 (I know he has a girlfriend, it's a friggin' line).

I don't think there's any question that this team is better off with him taking a handful of Preston-esque semi-contested shots a night than it is with him passing those looks up. Taking those shots will also significantly open up the potential for him to get clear mid-range looks once defenders start flying at him on the perimeter.

Also great to see Kyle finish with six boards and three assists. Before Saturday, he had not recorded an assist since the Long Beach State game.

Loved seeing MJJ get some first half run. We've just got to get him cramming once he gets around the rim. Let's get him on that jumping machine Gorgui's using.

Not sure if Russ is just a kid who's heavy on irony, but I'm told that his current Facebook profile picture is the following: 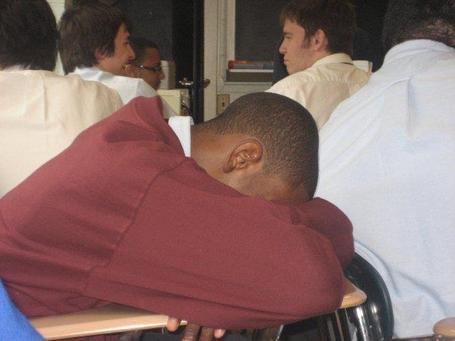 Classic Russ. Apparently he'll be ready to go against Memphis.

Pitino said after the game that they were worried about pushing Rock too much too soon, which is why he didn't see the floor at all on Saturday. It'll be interesting to see just how much he's utilized against Memphis. My guess is at least 15 minutes.

Nice to see Gorgui notch his second straight double-double. It might not seem like a big deal, but keep in mind that Gorgs only has five double-digit rebound games in his career here. He's really coming along.

I didn't mention after the IUPUI game that I was in the section picked for the free Rally burger. So, yeah, I'm mentioning it now. Probably not going to use it (I don't understand why a fast food chain would advertise so heavily in a city where it has so few locations), but I'm almost positive this is the first time I've ever won anything at a football or basketball game. I cried. 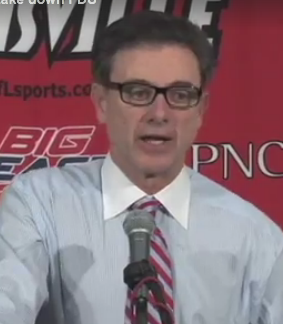 You're just going to let Hendo pull on you like that at the end of the first half? Few mistakes in life are met with a more immediate punishment. Three points, Louisville. Every time.

Melquan Bolding played like a guy trying to prove a point. If that point was that he should have been playing for the home team on Saturday afternoon I'm not sure he was completely successful, but he has turned out to be a nice player.

Chane was repeatedly called "Chace" whenever his alley-oop finish was shown on SportsCenter. I appreciate flair, but maybe the classic S would have been the better play on the first letter here.

Also, the "BO-Hannon" and "BENahan" talk continues from various U of L fans. Let's just hope this is a pre-Big East thing. If we got "Gorgui Dieng" down then surely this can't be an unachievable task.

I always enjoy the December bunnies. You get to relaxingly take in the game with family, Christmas lights are sparkling outside, some of the best jokes of the season are made, either in the arena or at the expense of the local coverage; it's a solid holiday tradition.

That said, I could not be more ready for Memphis State this Saturday. I don't care that they've already lost thrice and will almost certainly be unranked come this afternoon. It's been almost seven years since we've seen our old rivals on the hardwood, and that's far too long. The atmosphere at the Yum ought to be tremendous.