Dylan and Emma are already at the arena and have made it known that they have zero intention of leaving before tomorrow night's game. You want to know what she's got in her hands? Come within five feet of her seat and you're going to find out.

Luke Winn is back with another installment of his weekly power rankings, and he's got the Cards up a couple spots to No. 11.

On the subject of better-than-expected frontcourts, the Cards have been killers on defense despite losing their primary interior presence, 6-foot-9 Terrence Jennings, to an ill-advised draft decision. His replacement, 6-11 Gorgui Dieng, is a big reason why they're holding opponents to just 36.9 percent inside the arc, which ranks seventh nationally. Dieng is blocking 12.2 percent of opponents' 2-point attempts, while it's an undersized power forward -- 6-6 Chane Behanan -- who's dominating on the defensive glass, grabbing 23.7 percent of misses. (Backup Jared Swopshire isn't bad either, at 20.3 percent.) It was unclear if Louisville was going to maintain its defensive efficiency after the departures of Jennings and perimeter stopper Preston Knowles, but it ranks third in the nation in adjusted points allowed per possession heading into Friday's meeting with Vandy.

Voting ends in the AllState Coach of the Year contest here in a couple of days. Vote for Charlie while you can.

The Cincy/UConn spread has dropped to -9.5. I'd expect it to drop by at least another point if West Virginia beats South Florida tonight.

If you didn't read Bozich's column about Schnelly in the Courier this morning, you probably should. Can't give me enough Schnell.

Solid tidbit from Howie Lindsey: "If Louisville beats Vandy - the Cardinals will have a 7-0 start for the second consecutive season for the first time in program history."

The Big East title race is down to two games now.

For Louisville, it all comes down to the Cincinnati game. If the Bearcats lose and leave it a two-way finish for first, the slow-starting Cardinals would get the bid because of their win over West Virginia — a stunning outcome for a team that best represents the conference’s season of unpredictability.

The Cardinals lost four of their first six and had to turn to a freshman quarterback — Teddy Bridgewater — in the process of digging out.

"When you’re sitting at 2-4, you say, ‘We’re going to be sitting home at Christmas and it’s not going to be very fun,"’ coach Charlie Strong said. "I don’t think any of us saw this coming. At 2-4, you’re just sitting there saying: ‘Will we win another game?"’

A quick preview of the opening night of the Big East/SEC Challenge.

Another message from U of L about the soccer game Saturday night:

Calling all U of L Students-- Due to the popular demand the University of Louisville has bought another ADDITIONAL 500 tickets for students. Pick up your FREE ticket at the U of L ticket office located on the 3rd floor of the SAC before 5:00 on Friday! Hope to see you Saturday! GO CARDS!

Kentucky has been fined $50,000 by the SEC for rushing the field after beating a 5-7 team. 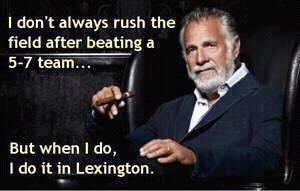 Here's the AP's preview of tomorrow night's game against Vanderbilt.

One of the primary issues for Vandy right now is getting over Monday's deflating overtime loss to Xavier.

The women's volleyball team begins its NCAA Tournament tomorrow night against Ball State. Here's everything you need to know.

And finally, the very not safe for work UK fan picture everyone is talking about (if easily offended, do not click).